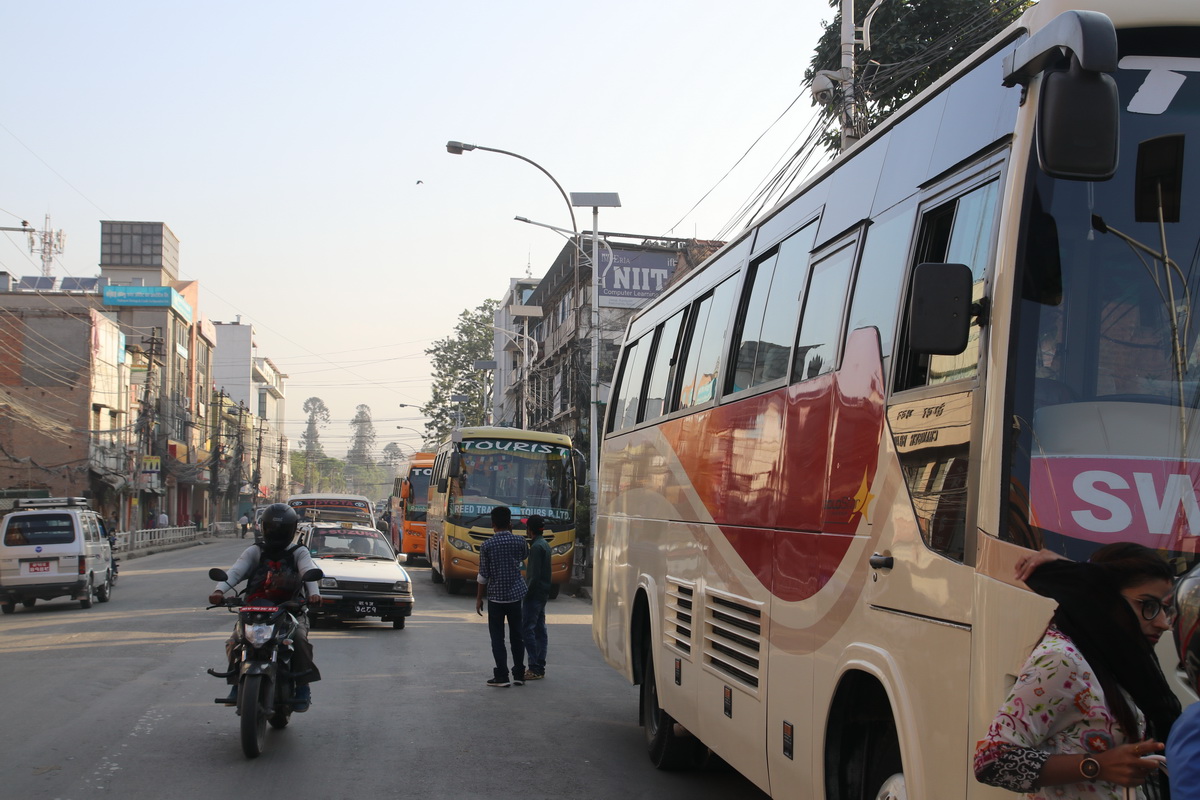 Kantipath bus stop is no more. All tourist buses to Pokhara and Chitwan now leave from the Sorhakhutte to the north west of Thamel (north of Paknajol).

Since 2003 tourists have enjoyed the short relatively easy and quiet walk from Thamel to nearby Kantipath at 6.30am to catch the popular tourist buses to Pokhara and Chitwan departing at 7am.

Three months ago it was “decided” that the buses were causing traffic issues and they should be moved to the other side of Thamel by the not so pleasant to reach Sorhakhutte area. The move went ahead this week. Moreover, it’s likely the bus stop will be moved even further out in the not so distant future.

My Guidebooks have been updated

Firstly, if you already bought my print guidebook to Nepal or a previous digital edition please refer to the Paknajol map on page 72. The new Transport (bus) icon (i, Sorhakhutte) is already marked on the map. This is where tourist buses to Pokhara and Chitwan now depart from at 7am.

Secondly, I’ve just updated all my latest guidebooks to Nepal with the latest information on the new Sorhakhutte tourist bus stop including on all relevant maps and text.

These are the most up to date guidebooks to Nepal available anywhere in the world. In 2016 when Ratna bus park closed, the books were updated within the week. Now, in 2018, it took a day.

This is the difference between an independent insider guidebook and a generic corporate guidebook – you get the very latest information here.

These are also the only guidebooks that have the very latest reconstruction information on temples and trekking routes throughout Nepal so you can plan ahead knowing what’s really accurate. I’ve also included the latest round of 2018 regional tourist taxes that are appearing across Nepal for entrance fees into towns like Nagarkot.

Trust me, you won’t find this information in any other guidebook to Nepal.

Check out the world’s most up to date guidebook to Nepal.

Why did the bus stop move from Kantipath to Sorhakhutte?

Allegedly because of the increasing traffic in Kathmandu. In reality, if you’ve ever taken a bus from Kantipath you’d be hard pressed to find any traffic at 6am-7am as you made your way to the bus stop. The real traffic occurs in Kalanki by 8am when you are wondering why nothing is moving.

The Kalanki  morning traffic jam is still there as this part of the bus route has not changed.

The irony is that Sorhakhutte is more awkward to reach. Involves walking along a road with no footpath (Paknajol). Walking down a steep hill (Paknajol) and will likely increase traffic even more as people opt to take a taxi instead of walking.

The bus stop at Kantipath was along a nice flat wide road nearby the American Mission Association. There were several side roads you could use to walk there. It was a quiet area at 6.30am, there are pedestrian crossings, a police presence and hotels were happy to send a porter with you. It was about 650 meters from Hot Breads Bakery (near Kathmandu Guesthouse) on a flat road.

The new bus stop at Sorhakhutte involves walking through Thamel over to Paknajol road. Unfortunately, Paknajol road has no footpaths. It means unless you are wearing a backpack, your bags wheels are in for a bit of a rough beating. Likewise, you’ll need to watch out for early morning taxis and traffic on the road. Paknajol road also dips steeply down as you enter into Sorhakutte junction and swing a left onto the large dusty pavement. It’s about 715 meters from Hot Breads Bakery (near Kathmandu Guesthouse) using z street to avoid one of the main roads which has no pedestrian crossing.

There’s little police presence in Sorhakhutte mainly due to no American Mission Grounds. As Kathmandu is a relatively safe place, this is not really an issue, yet. But still, Kantipath always had a very safe and simple appeal to it.

Of course the above is relative. The new backpacker area is in Paknajol so if you are staying on this side of Kathmandu, then it’s now a bonus. If staying else where, then the reality is you’ll just have to get up an extra 10- 15 minutes early. Earlier again if you want to walk slowly to avoid damage to your bags wheels. Or simply pony up and pay for a taxi.

Oh yea, one more thing. They bumped up the bus ticket price by USD$1 or about 1oo+ rupees.

I’ve marked several walking routes to the new bus stop. Black is the most direct but with no pedestrian crossings. Orange is a direct route. While the two green lines are the easiest. The two green bus icons represent the new bus queue and the red bus icon represents the old Kantipath bus stop.

Again, there are better maps in my guidebooks to Nepal

One word of advice, don’t follow Google’s walking routes. They are not so great in Kathmandu. Better yet, support independent books and get a guidebook to Nepal – the only one with this new information.

The Sorhakutte tourist bus stop is only temporary

Hoteliers are not happy about the move. They’ve asked for at least 2 bus routes per day to both Pokhara and Chitwan. Tourists often have to forgo breakfast to make the once per day early departing buses.

The Kantipath bus stop was only a temporary one in 2003. So, with any luck the Sorhakhutte will be just as “temporary”. Why is this good?

Well, “many” people want a dedicated tourist bus station. Unfortunately there is no space in the city. So the only alternative would be to build one well outside Thamel and the main city.

As a tourist, if there’s one thing I despise it’s a transport network in the suburbs. Having buses, railways, airports etc in the central area is an absolute joy and makes arriving so much easier. Having these transport hubs out in the suburbs is horrible. Especially for late arrivals.

So while Sorhakhutte is not as tourist friendly a location as Kantipath, it’s a lot easier and cheaper than having to locate a station out in the suburbs.

No. It’s just like Kantipath in terms of a line of buses with nothing separating Pokhara or Chitwan buses. There’s still no direct Lumbini bus. Forget about toilet facilities. It’s Nepal, it’s an adventure.

Hoteliers have been asking for two buses a day. So tourists don’t have to get up in the dark and miss out on breakfast. There are very few restaurants in Kathmandu open at 6am (many say they do, but the reality is different). Most tourist buses stop at 1oam for breakfast along the way.

However, if a later bus did exist if could well mean people roll into a new destination in the dark. Not so nice. So the early bus is actually the best option. Personally, I’d like a 4am bus. That way half my day isn’t wasted arriving into either Pokhara or Chitwan in the middle of the afternoon.

Back in 2007 the bus from Kathmandu to Pokhara only took 6-7 hours. In 2018 be prepared for 7-9 hours. Roads have not improved very well and traffic has increased. One small landslide can hold up the entire route by 10 hours.

Every year Mugling (a junction town where most of the traffic jams occur) makes the headlines. Every year the road and the landslides are”repaired” at great cost. Sadly, it’s a yearly event. Thankfully delays are relatively sparse during peak tourist season.

The Kathmandu to Pokhara bus seat scam is still thriving. However, I’m pleased to say that some bus company owners and conductors have been “laughing” that “tourists have finally grown smart about it”. So, at least there’s that bit of positivity -well done to all who read the above!

The cost of a tourist bus to Pokhara or Chitwan has also gone up by 100 rupees. This is more to do with fuel prices than the move.

Taking a tourist bus to Pokhara or Chitwan? Make sure you leave from Sorhakhutte

If you are using an old guidebook make sure you find out where Sorhakhutte is as that’s where tourist buses from Kathmandu to Pokhara and Chitwan now depart from at 7am every morning.

In Kathmandu Sorhakhutte is pronounced “Sor – a – kutti” and depending on the dialect “Sur – a – Kotti“. Ah, yes, they made every step of the way easy. If you are not sure, just confirm by asking if the bus stop they mean is “near Paknajol”.

Again, all my Nepal guidebooks have been updated with the new tourist bus park location. Likewise the Ratna park regional move. And the very latest new “tourist taxes” in places like Nagarkot. If the bus stop moves again, I’ll update again.