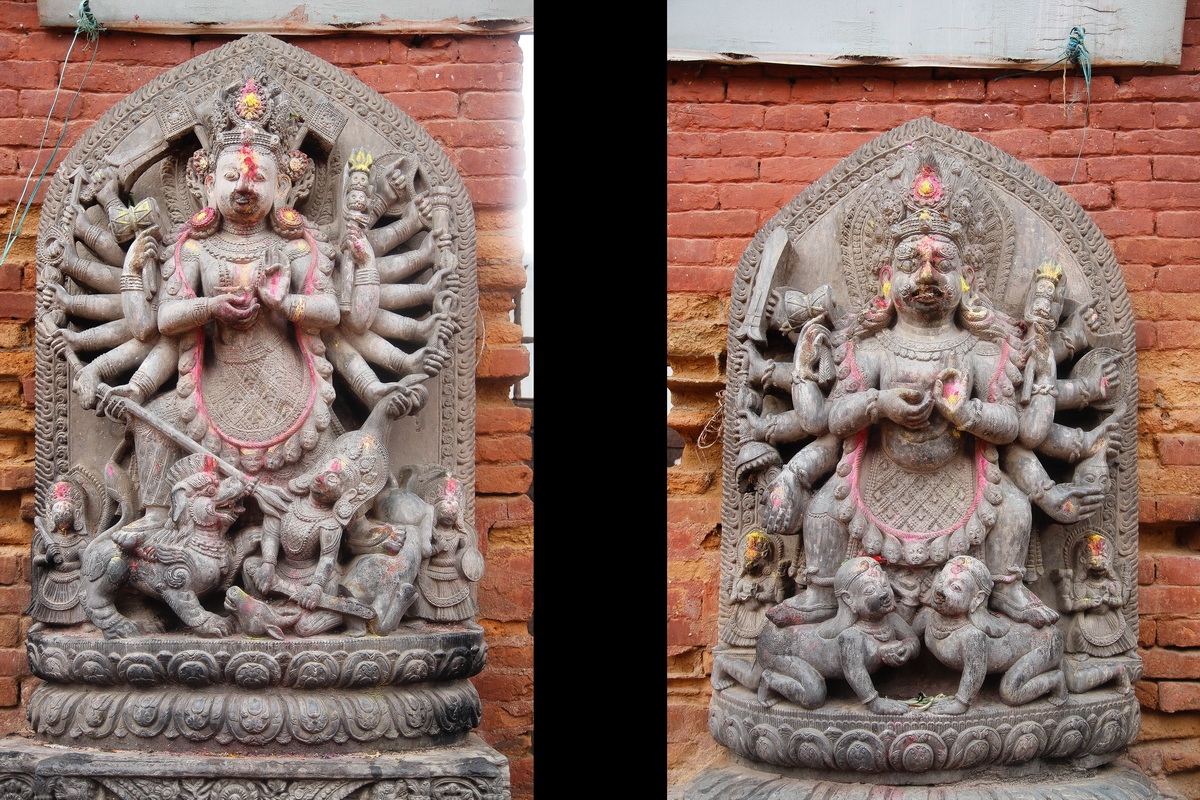 The statues so beautiful they cost the artist his hands

As tales go in Nepal the one about the Ugrachandi and Bhairab statues has been one that has stayed popular for the past 300 or so years. It’s a short one (no pun intended) that shows the rivalry of the Malla kings was not as honorable as they are often made out to be.

Two huge stone lions stand outside an old gate along a red brick wall. The gate used to lead into an older part of the royal palace here. But the buildings are long gone since the 1934 CE earthquake. Instead you might be asked for your school pass as the area now contains a secondary school.

On either side of the outer entrance wall is what we are looking for. Two stone pillars which have a statue mounted on top of them. To the left is Ugrachandi and to the right is Bhairab.

The rivalry of the Malla kings

Without getting into the intricate history of the Malla kings lineage this story revolves around their “artistic rivalry”. Before there was “Nepal”, the Kathmandu Valley was a unique places largely ruled by three Kingdoms. Kathmandu (Kantipur), Patan (Lalitpur) and Bhaktapur (Bhadgaon).

The kings and their lineage fought constantly. It was more bloody and ferocious than any guide will ever tell you. Instead they’ll focus on one of the more peaceful past-times of the kings. Artistic rivalry.

This is largely how each of these royal capitals became renown for their artwork, buildings and temples. The same ones you visit in Nepal.

In the case of the Ugrachandi and Bhairab statues, the story unveils quite how far the kings would go to be noted as “the best”.

In 1707 CE King Bhupatindra (1696 to 1722) commissioned the sculpting of the goddess Ugrachandi. While a lesser known goddess, she is the goddess of nearby Banepa and some say an incarnation of Durga.

The result of the stone masons work is clear to all. The statue of Ugrachandi is truly intricate, detailed and stunning.

The eighteen-armed goddess is depicted dispatching a fallen enemy with her trident and a guardian lion.

King Bhupatindra also thought the statue was beautiful. In fact he was so impressed with the stone masons work he didn’t want any of the other kings within the Kathmandu valley to have a statue like it. So, he chopped of the masons right hand.

To the right of Basantapur chowk entrance is a fierce looking Bhariab statue. Depicted in his twelve-arm pose, complete with beheaded enemies, Bhairab is known as a “terribly fearsome form”. If you are on his side however, this fearsome form will protect you from enemies, greed, lust and anger. Interestingly Bhairab also appears in Buddhism as a fierce form of Manjushri. The Bodavista who was meant to have drained a lake and so the Kathmandu Valley was formed. But, that’s another story.

Remember the stone mason who lost his hand sculpting the nearby Ugrachandi statue? Well, he created the Bhairab statue by himself a little later on. The story goes that King Bhupatindra found out and promptly removed the sculptors left hand.

We don’t know if the sculptor ever tried or could make anything ever again. Presumably not.

A royal rivalry that cost a man his hands

While the artistic rivalry of the former Malla kings is often said with a sense of pride there is a lot more to history than just what was left behind. The Kathmandu Valley was largely isolated for many years with these kings battling each other both physically and in the arts.

There’s no doubting what they left behind is a stunning collection of artwork and buildings. However, the next time someone says “This was made by King …” do consider it was most likely not the king himself who sculpted or made it.

Moreover,   the person who did sculpt a statue may not have been able to make anything else thereafter! Or in this case, they tried for either love or money and lost their hands.

The one thing they do have that many artists don’t have from back then is a story that may well outlast the statues themselves!