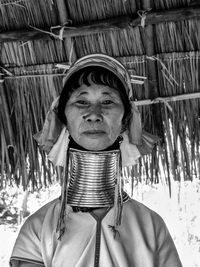 The Kayan long-neck tribes and tiger kingdoms of Northern Thailand

If you visit Northern Thailand then sooner or later you will start to see posters and brochures from tour operators advertising visits to the Long-Neck tribes. Photographs of a people with elongated “giraffe” like necks pull in thousands of quizzical tourists every week.

On the same tour packages you’ll often be given a supplemental bonus of being able to visit (and touch) real Indochinese Tigers. And, possibly an orchid garden. Sufficed to say tiger stroking is more popular.

Two of Thailand’s most popular attractions that are abhorred by human/animal rights organisations the world over and yet remain incredibly popular amongst worldwide tourists visiting Thailand.

More bizarrely, for me, they mirror “western” attractions more closely than you might think.

A look at the Kayan hill tribe people

Originating from Burma the Burmese called them Padaung which means long necks. The word “Padaung” comes from “Paitong” which means “decorating the neck with gold”.

The long neck of the Kayan people is in fact an optical illusion. From 5 years of age girls begin wearing brass rings around their necks. The weight of the brass rings push the collar bone down and compresses the rib cage underneath. The appearance of a stretched neck is thusly created by the angularity of the clavicle and aesthetics of brass coils around the neck.

A new life began for the refugees. The then Thai governor of Mae Hong Sae state saw a way to both relieve financial pressure and indeed increase revenue by popularizing the female tribe members with their elongated necks and brass rings as tourist attractions.

It worked. The tourist dollars came pouring in. So much so many tribe members encouraged others still in Burma to enter Thailand so they too could earn money.

Ethnic tourism had moved into full swing in Thailand.

From dance shows in Bangkok and Chiang Mai to “remote” village tours to see the “Long-Necks” it’s all set up to entice people to spend tourist dollars in Thailand. Ethical debates rage on and are juxtaposed between “they earn money”, “it saves them” to “exploitation of refugees” and “stop this humanitarian madness”.

Nevertheless, the tours rage on with increasing popularity. For 500 baht you can take an air-conditioned tour from Chiang Mai to see the Long-Necks. Or if you go independently be prepared to pay 250 baht to enter one of the small hill tribe villages.

Inside you’ll have about 10 Kayan Long-Necks waiting by their stalls to sell carvings, jewelry and yes brass neck rings. The average salary of a Kayan in this type of “village”? 2000 baht a month. More than many but a lot less than the massive percentage being taken by the tour groups that go their daily in their hundreds.

Moreover at the best of times you’ll see another human zoo for free. Bus loads of tourists armed with cameras and i-Pads all directed at the ladies with long-necks. It’s a showcase the likes of which will live with you a while.

It’s not the long-necks so much but our own craving to see them that makes the real human zoo complete.

The above human exploitation for profitability or savior runs parallel to the tiger dilemma many will also come across in Northern Thailand. Very often it’s on the same “tour” package as the long-neck village. A visit to the Tiger Kingdom to pet a wild tiger!

Yes, you too can pet a wild tiger that’s drugged up and locked up in a “reserve” / “conservation center” call it what you will. At the end of your visit you too will have a photo taken hugging a wild tiger, biting its tail or feeding it a live chicken …

I met a Dutch girl in Nepal who didn’t want to visit a jungle reserve there to try and see a wild tiger because “… it’s a waste of time, I’ve petted a real live tiger in Thailand!”

Thusly for at least one person we can tell the message of where and how wild tigers should be kept really doesn’t seem to be sinking in.

Scour the internet and you will find dozens of photos of “well educated” people with tiger hugging photos.

A visit to the Tiger Kingdom

I met up with some Indian and Swedish folk at the entrance to “Tiger Kingdom”. I really did not want to go in. There’s no charge. It just hurt to see something which to me is simply nonsensical and stupid.

I met only one other person who felt the same way amongst the 50 or so more people packing into Tiger Kingdom. I followed the Swedish couple vowing not to pay a baht. There’s a restaurant there. I hovered.

The Swedish couple debated the ethics. They could buy a private petting room. They could choose the size of tiger to pet from smallest, small, medium or large. Prices from 600 baht up. Custom photo CD’s were on offer at a price too. It was all too easy.

They hated the idea and agreed it all seemed so wrong.

But the urge was too great.

“We’re going in. But will keep our distance.”

I worked my way around the restaurant passing by the closed private petting rooms. Below were several large fenced areas where many tourists were being led to pet a tiger.

There were two Thai men to each compound. One with a stick in the background and one with a stick dealing with the tourist and tiger. The tigers were usually just sitting there looking peeved or sleepy.

Nervous chuckles over as they entered a tourist would promptly be told to sit behind the tiger and encouraged to pet, stroke or hug it for a photo. If the tiger moved a stick was placed on its face. Three to five minutes later and the ordeal was over and the tourist would leave only to be replaced by another nervous tourist.

This went on and on. I took some photos from the distance.

The secondary men with sticks weren’t all that happy with me hovering around for free.

No more so than I was to being there. It all jarred horribly.

It got a little worse as I saw a man (trainer/keeper) playing with a tiger and making it jump into water for some tourists.

I left to the restaurant again.

When the Swedish couple came out they had big smiles which quickly disappeared as they saw me taking photos at the entrance.

I nodded. The mild friendship of ethical debate earlier had been broken. We all knew it. I jumped on my bike and left.

It’s not my country. There’s a different set of rules here. But still the ethically minded tourists flocked in.

While it’s relatively easy to lambaste the world with the moral and ethical rights of Kayan long necks and Indochinese tigers it’s harder to convince people what to do when they arrive.

While people condone the Thai government for turning the Kayan refugees into a tourist spectacle people in the USA pay higher fees to watch children dress up as adults in beauty pageants.

We even try to mimic the long-necks for our own body modification rights/fetishes.

Still in the east, we tourists pay money to see Muai Thai (kick boxing) which is largely staged for us yet denied that it is. Yet back home Professional Wrestling is a huge commercial success and self admittedly “entertainment”.

Wrestlers break bones and injure themselves for our entertainment. Even though it’s “entertainment” and many pay big money to see them do it.

Orangutans in Malaysia face extinction but are holding on not by virtue of wildlife funds but due to tourist dollars from visits to see them. Elephants in Thailand are the national symbol used to make large profits by carrying tourists around.

Last week a UK tour operator ceased to do business with unethical animal trips as more stories about the truth behind these places gets out and the debate rages on about visiting a tiger in Thailand.

As for the Kayan? Their plight or salvation as Kayan refugees is noted at the UN and yet they still seem to be stuck in no-mans land.

From hill tribes to tiger temples, elephant rides and Muay Thai we are fast to condone Thailand’s tourism practices. Yet each culture on this planet has its own debatable, ethical and moral quandaries based on their own entertainment and cultural roots.

Will we ever agree on who or what is right?

I don’t see it happening soon. I know tiger kingdoms and the like are not for me. I see the debate over the orangutan but also don’t agree. We have the resources to help, but we simply don’t care enough.

Should you visit the Kayan tribes? It’s up to you.

Should you visit a tiger kingdom? I think you are very wrong.

It’s not up to me what you do. Cultures are different and so are people. If you can live with it, then you can do it.

I don’t want to. So I move on. At the end of the day I can’t make you change your mind. I can only tell you some facts and my experience. The rest is up to you. Right or wrong it will be your choice what to see and do.

This is a feature article about Kayan long necks, tiger temples and tourism in Thailand

Planning on booking a hotel room in Bangkok?

I recommend you try my own hotel search for Bangkok.