Please note: I have been in Germany before. This time I had to way up the finances vs the possibilities of living there, and so traveled though quickly on the overland leg of this journey. I visited friends and bought many of the things I needed for the reset of journey here.

Some memorable places I have been

Stuttgart: The industrial capital and home to Mercedes Benz.

Tübingen: Untouched university town well worth the visit to see what old Germany looked like.

Over one third of Germany is covered in Forest and Woodland

By plane: Germany is a part of Europe's budget airline destinations. Again, if flying to a budget carriers destination, be aware of how far it really is from your end destination city.

By bus/car: Car rental in Germany is easy, and not as expensive as in France. Eurolines is the most popular international bus company that has several stops throughout Germany. There are also numerous hop on and off tour companies offering the same. Coming from France on Eurolines we were stopped just over the border for over 40 minutes for passport inspection. Two people were taken off and their bags searched. They did police checks on all passports.

By Train: The train network in Germany is well maintained. Last minute tickets can be expensive though. So book in advance or buy a Euro Rail ticket.

I seriously enjoyed German food. The huge meat breakfasts are stunning to the carnivores out there. Germany has more meat varieties than any other country I have visited. Breads and pastries were also a surprise as they were great tasting. Supermarkets were relatively cheap, and street stalls offered a wide variety of food.

I liked the Germans. Structure and sense of humor aside. Meet some German's that know they have a different sense of humor and you will have a good time. Strangely I found young student types to be a little arrogant and over confident. I found the average German very helpful and pleasant.

Not a chance. At least for me its a tough one. The German's I met were even more fussy, though nicer, about how non German's speak their language. English is however taught in all secondary schools, and the average German does know some.

Do shop for things you can't find anywhere else in Europe. I found Germany a great place to ask for something, and then having someone find it fast. Do try as much local German food as you can, it's some of the best. Do try the beer, not my favorite, but seems to be everyone else's. Erm ... Don't mention the war ;-)

I am lucky enough to have some German friends so no need for expensive accommodation again here. That said, hostels are considerably cheaper in the main cites here than in France. But go too far out, and it's welcome to some expensive guest houses. The same can be said for the industry cities. Couchsurfing anyone?

Living in Germany I would imagine could be quite nice. It would take a few years to get the language issues sorted. But again personally it would be a huge financial problem to set up in Germany without a job, a big commitment would be needed otherwise. However I did find the German lifestyle to be quite agreeable.

FAQ's on traveling in Germany

How much is a daily budget in Germany?

This is a tough one to answer considering my journey through Germany. Some cities are seriously expensive and do not cater to backpackers, local transport is also quite expensive.

Germany is also home to many huge budget supermarkets, so if you are staying a while, do make use of them. So all in all sticking to a city/town with a hostel I would budget 45-55 Euro per day.

How to save money on transport in Germany?

All German cities and towns seem to have a good tourist office. Head in and ask about metro, bus and rail weekly passes. It's worth it if you are staying in a place like Berlin for a week.

Money in Germany, what to do?

International Credit cards like VISA or MasterCard work everywhere as do most debit cards.

Please keep in mind all the above is based on my own personal experience in Germany. It's not intended to be a guide. If the information here can help you on your own travels then that's a good thing! 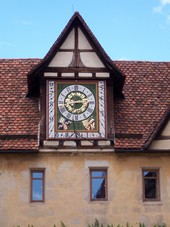 Europe on a shoestring