Rafflesia in the Philippines, finding the worlds largest flower

It started as a quick notion of something to do on a weekend in Mindanao. I'd vaguely heard of the world's largest flower 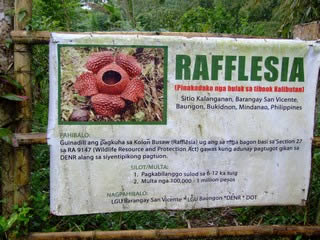 Rafflesia. Something about a giant parasitic flower that was really a plant that smelled of rotting meat and attracted flies once a year. What's more I learned that it only populates in Indonesian and Malaysian Borneo. In fact 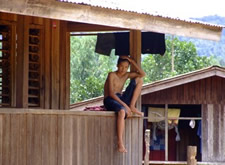 , not only is Rafflesia schadenbergiana a rare flower to be found blooming anywhere in the world, but it's the rarest flower in the Philippines.

I was lucky enough after a previous attempt to see the flower to get a call on on Christmas Eve letting me know the rafflesia had just bloomed. It was only open to scientific researchers though. So packed into a jeep filled with Scientist, journalists, and my dubious media research ID we headed due south to Baungon, Bukidnon.

My previous visit had led me to befriend the local caretaker ladies, and the captain of the army platoon stationed there. Sadly this time the captain was not around, so the other army chaps didn't quite know what to do with me and my camera. After the mayors approval we set off down the misty wet trail into the surrounding 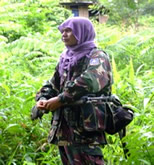 jungle. One that in part was landscaped 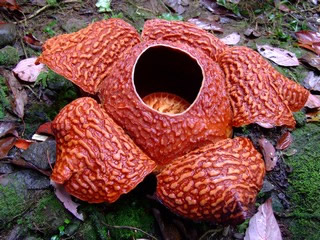 by the caretakers quite nicely.

Around a corner and there it bloomed. Rafflesia schadenbergiana. The bright red color and whitish spots were the most sticking things, seconded by the circular pit at its center. It's actually a plant, and not a flower, but it's looks give in the moniker. The petals all 23.6 inches in diameter made it not the largest one ever. It was located near a river that often overflowed and hence hampered its growth.

The end of one petal was already showing signs of withering up. Turning a 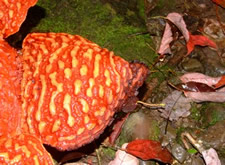 black color it was truly amazing to see for one's self just how short the period of it's bloom was. At it's almost illuminant center household flies gathered. Attracted by the rotting meat smell it 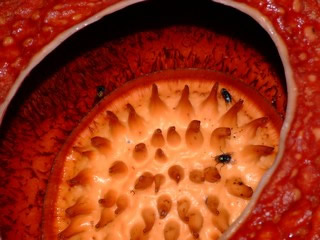 The plant is actually a parasite. Living off, of all things, a vein. A vein that hangs from another tree. In the dense jungle light on a rainy day it was hard to follow the flow of the planets creepers. But down in the moisten earth I did catch a glimpse of a new leaf taking hold. 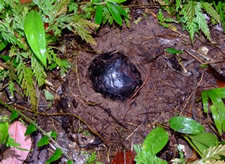 measurements and sniffed at it for quite a while. The smell is not so toxic, but it certainly does have the odor of decaying meat. Something that attracts flies that help pollinate it. One of the caretakers was kind enough to show me another Rafflesia nearby. A mere brown bulb of a stump that still had 6 months left before it's annual bloom. The good news was that the Rafflesia schadenbergiana was thriving well it seemed. 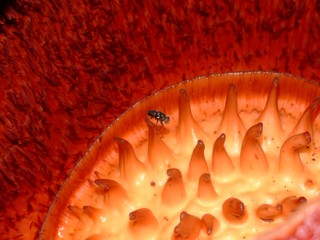 As the group left I managed to capture a few more shots of the flower, sitting there alone. Strange as it might seem, but 99% of all

shots of this plant seem to be with a person grinning over it as if the smell wasn't off putting enough. For me the Philippines rarest once a year blooming treasure that is the Christmas Day Rafflesia looks a lot better surrounded by natural fauna. 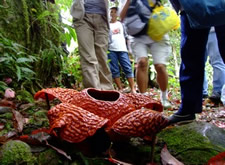 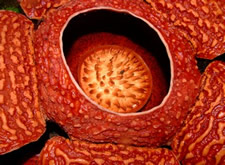 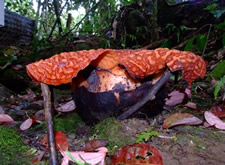