Camiguin, a true tropical island in the Philippines is a favorite of mine. White sand beaches, coral reefs, natural springs, a 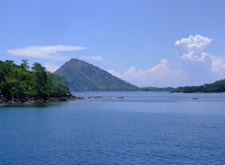 volcano and a sunken cemetery. What more could one want from an island. I'd 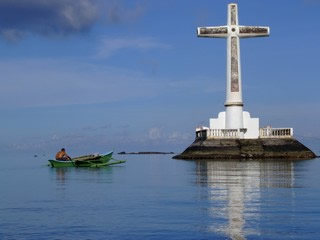 heard of the Lanzone's fruit festival through an internet search and learned it was coming up in October. Sadly like a lot of Filipino things it was not advertised very well, and all a bit last minute. But to make up for it, this beautiful islands annual festival sparked one of my best experiences in the Philippines.

Spurred on by a tattered timetable my town center hotel managed 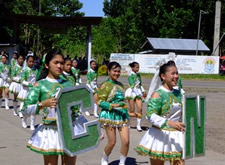 to find for me I headed out to watch a local parade that promised a lot. Like many, I stood in blazing heat and watched as scores of sweat covered school kids, civil servants and the consistent parade band girls march by. My only source of relief was to watch a few heat inspired tantrums erupt and a strange mushroom man obsessed with waving at me.

I followed the rag tag bunch to Island's stadium, where security was at a high due to the Presidents impending visit. Things were starting to look up. Rather than have my giant pockets searched security was more obsessed with looking at my camera bag, batteries and asking me to 'on' my camera. Satisfied my camera wasn't a 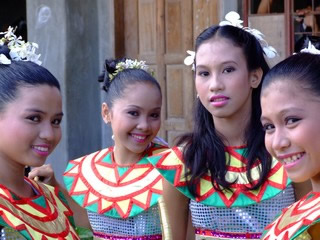 weapon of mass destruction I was given a little sticker and ushered through. Bombs, guns and all manner of destructive weapon in my pockets remaining untouched. The vast crowd were all pushing into the makeshift concrete stands that boomed with ubiquitous Filipino 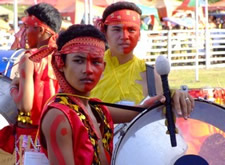 techno beats. So naturally when I saw the press section, I headed straight over there with my little business card and foreigner plea of press. Having a big camera helps too.

It was a good choice. As I headed under the stand I was immediately surrounded by a bevy of Filipino beauties. My luck was back, it was the start of the Miss Camiguin contest! Young ladies from all over the island were in a frenzy of preparation for this talent contest. According to one girl, a mix of beauty and dance. Girls from eight up to there late twenties were all clustered into little groups in differing costumes. Each taking influence from local, native and traditional fare. Not to mention, the illusive and scarce Lanzone itself.

Make up applied to perfection and steps rehearsed as if a life depended on it the competition soon got under way. The 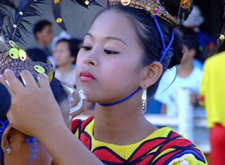 speakers were adjusted to full volume and a repetitive thud of 'Something something, Lanzones festival," blasted out for the next three hours. No one seemed 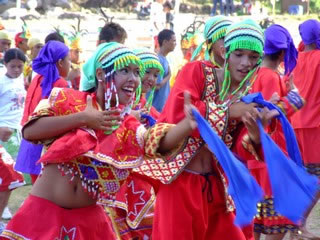 to mind. Neither did I. Why should I have considering I had a front row seat as scores of beautiful young ladies came streaming out to partake in well choreographed dance routines.

Shake a little of this, shake a lot of that, the key was always to smile. Even as the sun blazed down the girls kept constant smiles directed at the three judges high up in the stands. Each with their own routine, the work that 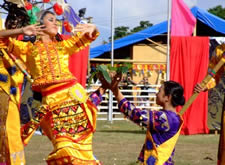 went into the costumes and dances moves was impressive.

Press rights aside, I was able to roam around freely with the other photographers and get up close paparazzi style. There were not temper tantrums here. Seeing a camera the girls elaborate choreographer would snap his fingers in my direction and the girls would turn and strike a pose. 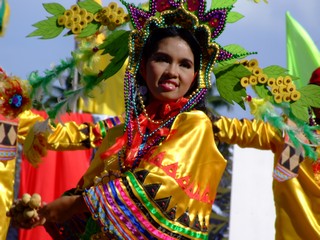 As part of the beauty contest they brought the dance up close to the judges, one female, two male. Shook a few lanzones at them, 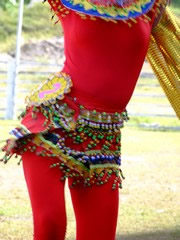 said two lines and then dances off again. Then the loudspeakers came. Miss President was on her way. It took an hour, a few helicopter swoops, and more announcements but finally Aunty (as she is affectionately, or maybe not know as) arrived. The tourism minister gave relatively good speech, not too long, in English and pushed for further development. Big round of applause. The Miss President spoke in Visayan, for a long time. Long time. Somehow the crowd were not so into it, and the applause was muted. Saved only by a loudspeaker and more techno music. 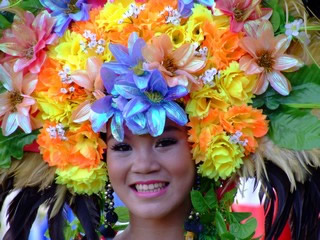 Then she was gone.

The beauty pageant continued on the next day, this time with musical contest that did not involve synthetic techno beats. But rather drum beats from various native attired bands. Each Miss Camiguin girl would one again appear, and swing her stuff once more.

I left Camiguin with that rare feeling in the Philippines of actually having seen some native costumes, albeit new and inspired by pageantry and competition. But the Lanzones festival did deliver all the right elements that make Camiguin island one of the best, little known places to visit. Especially with a press pass, and a Miss Camiguin to Photograph. 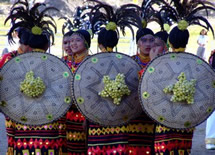 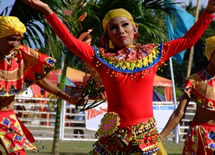