The Jeepney Maker in The Philippines

The first moment I saw a Filipino Jeepney I was enthralled. Large, noisy, potentially gas guzzling and seemingly impractical 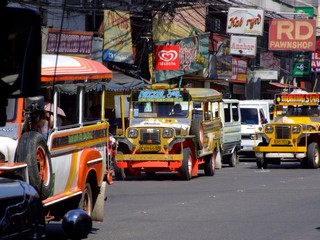 forms of colourful public transport. A cross between a WW2 Americano style Jeep that’s had its mid and rear section stretched out, and a hyperbole of colour, stickers, honking with a mass of passengers crammed into its belly. 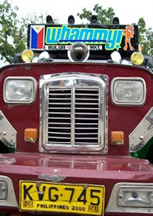 They are everywhere, swinging swerving and rarely colliding along over packed streets. What’s more, unlike other forms of mundane public transport, these beasts are strangely comfortable and very handy. But, where do Filipino Jeepney’s come from? This hybrid cross breed of American and Asian motor genetics seemed a mystery.

I asked around Manilla and the Visyas, only to be misunderstood, misquoted, and then offered 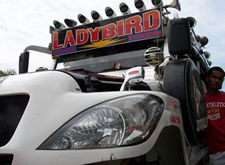 one for sale. No, I only wanted to know where they came from. Who created this unique auto mobile? Like most things these days, the internet coughed up some answers. A small site about post WW2 manufacturers that have long since closed down in post American influenced Philippines. 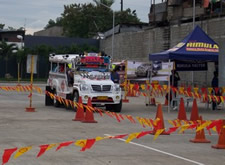 Mindanao's Cagayan de Oro city. A Jeepney beauty contest of sorts, and the odd drivers challenge of dodge the traffic cone and random Filipino running across a parking lot test. Emblazoned into several new Jeepney 2.0 beasts was the company logo Allison. A local manufacture. Many questions later, and I had a rough address.

I walked into the the

run-down garage yard not knowing whether it was a repair shop, garage or construction site. Passing by the ubiquitous white shirted security guard I was was directed to the managers office. The man’s name was Allison, and yes he was the main man behind the Allison Jeepney. 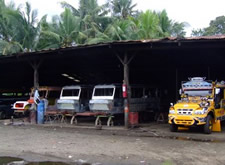 I sat down and spouted my blurb about being interested in knowing the history of this vehicle, and of course having no interest in buying one. Allison was suspicious at first, maybe I was a competitor? But with a few more dumb questions, it became clear I was just a strange tourist with a possible photographic fetish for his creations.

The Jeepney is indeed related to the old American Jeep’s. When the American Military left there were many mechanical spares left. So what better to do than chop the read wheels off a Jeep, build a long extension onto the back, paint it and then cram as many people on to it for 8 Pesos. 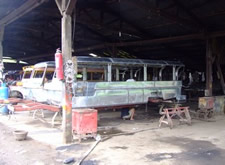 When the parts started to become scared, and the American suppliers disappeared. Enterprising Filipinos started to import Japanese Cargo Engines. A few custom tweaks here and there, and soon these became the standard new engine.

The Jeepney bodies were then panel beaten, and welded into a standard shape. The front end still resembling a WW2 Jeep. Pick a bright colour and paint in layers. Let it 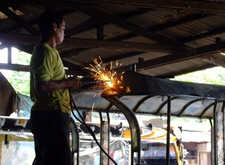 stew in the humidity for 4 weeks and out pops a new Jeepney. Not including bright stickers and scowling driver.

So who buys these vehicles? Well, Allison's main clientèle come from overseas 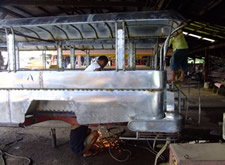 Filipinos who buy a Jeepney for family back home. The enterprising family member packs as many relatives on-board and heads off. Quickly seeing that other people are heading in the same direction, and are willing to pay, a Jeepney route is established.

Sadly business these days for all Jeepney manufactures is poor. Cheap Japanese 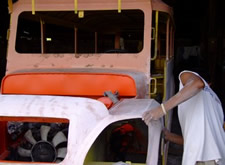 micro vans are easier to buy. Though nowhere near as comfortable to ride in, as it’s a ridiculous squash. Shipping Jeepney parts has become expensive, and a struggling economy all means life is not so steady for the Filipino stalwart of public transport. 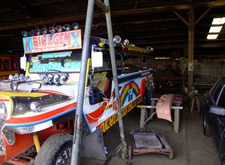 I watched as a new Jeepney left the yard. There weren't any new orders. Repairs are now the main source of income at Allison's. As oil becomes rare, and global trends move to hyper economic vehicles the Filipino Jeepney is in for one of it’s roughest rides yet. 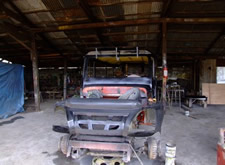 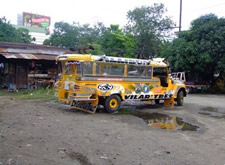