Travel Journal Overview:Not being able to travel through SWAT valley I had to take the 40 hour train trip that traversed most of the country just to get a few hours north to Peshawar. I  expected to be long and boring, instead it was a highlight.

Dinner vendors over the Hudus River, Pakistan (click to enlarge)

The Bloomstar Hotel manager was holding on to me for conversation on my last morning in Quetta. He wasn’t a prudent as I was in getting to departing train on time. Indeed he insisted the train stood no chance at leaving on time whatsoever. He was of course correct. I think for the first time in my life I arrived for a train 15 minutes late, and still it had not even arrived. I sat by the door of the first class waiting lounge. I had the ticket to allow be into such a privileged place, but preferred to wait outside to see an actual train arriving.

And arrive it did, a few minutes later. Stacks of bags of all shapes and sizes were scooped up by there owners and taken onboard in every conceivable manner. The train was had a very nice old style appeal to it. I think it had something to do with the yellowish colour and odd looking iron handles sticking out at odd angles.

I boarded with my usual confusion as to where I was meant to be. I large bearded man with silver rimmed glasses and a heavy black leather jacket approached me and examined my ticket. He showed me to my rather plush 1st class compartment, and then rather suspiciously asked if I was a journalist. It took a good hour but finally Lt. Colonel Abdul Taj finally opened up and became a good travel companion.

Our only other companion was a silent Doctor by the name of Haani who spent most of his time preparing for a medical exam he was attending. The Lt. Col had great English and a fabulous knowledge on the history of Pakistan. It was with Abdul’s encouragement he ventured outside at most stops, getting the curious stared from countless locals. He also encouraged me to take as many photograph’s as possible. At one stage this consisted of him holding on to me as a swung precariously out of the rusty carriage door at 80km as the sun was setting over the . The photographs would be too blurred with all bouncing around the train was doing, but it was at last enjoyable to be taking photo’s with the guardianship of a Col. during military rule. 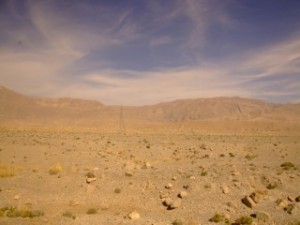 The Bolan Pass from the train, Pakistan

Our conversations ranged from the ancient history of Alexander’s conquests to modern day politics. His favourite topic was on war strategy and and as we headed out for a dinner of Chamma Curry beside the Indus river I learned that he was in fact a military teacher and had worked in the USA. Still, any mention of his work or past was always avoided. He kept mentioning the street vendor who served us the watery, but still quite tasty curry, and how happy he looked compared to those in the west. Simple life, happy man. I wondered about it for a second, but could never settle on the idea. I think if that man and his family had an option to live a similar income life in the west he would take it.

Too often I hear those in developing countries say how happy they are living there. Yet at the same time they are constantly thinking of ways to work overseas. This is a mute point that many disagree with. But, I have to say this is my opinion of what I have witnessed many times over.

That evening another man came into our carriage. He was a Pakistani NGO worker, and had plenty to say about the state of development in Pakistan. Yet at the same time complained about his new car, and the state of the 1st class carriage. I was glad to settle down to sleep early. I had the bottom sleeper that pulled out from the wall giving plenty of space and lots of cushioning.

The NGO man was thankfully gone by 5am while Col. Abdul was gone by 7am. He left me the train timetable and his contact numbers. Plus the warning that he just received word there were riots in Lahore over Bhutto’s arrival. He said to contact him, “We can help you out, if you get into any difficulties”. hmm

My main concern now was whether to get out at Lahore, or continue on into the night with the train, hoping it would arrive into Peshawar on time, 9pm. But it was already behind time by a few hours. Lahore was the safer option, albeit with a riot rather than coming into Peshawar at 2am during a military curfew. Ifzal, a guy I had met on an internet travel forum some time back lived in Peshawar and had been expecting me. That sort of sealed my fate, as I had told him I would be staying at the Rose Hotel that night. I texted him again, and soon got a reply. He would try to book me into the hotel.

I was on tender hooks, not helped my the remaining passenger in my carriage Dr. Haani who when he wasn’t reading a medical book was telling me how bad Peshawar was. I looked out the window at the rolling desert landscape. It seemed far more populated than Iran’s. Bright clothes hung from lines near sand colored mud brick houses. Donkey;s with their carts stood idly as we slowly chugged past.

Just before Lahore we pulled into a small village. Gone were the nice food stalls of last night. In fact I was relegated to eating my supplies from Quetta for breakfast. The train gave a sudden lunge and loud bang echoed down through its carriages sending adrenaline pumping into my blood. What was it? There’d been bombs found a few day’s earlier on a Pakistan train. Dr. Haani looked worried too as he popped his head into the corridor. He looked back in with a tight grin, it was just another carriage linking up with ours.

We reached Lahore at 11.50am, and pulled out again at 12.30pm, we were running late all right and I was still sitting on board. Having seen my determination Dr. Haani tried to call the Rose Hotel in Peshawar for me to confirm my arrival, but the lines were down. He just shook his head. This was not helping.

I ate a now two day old quiche and hoped my stomach would handle it. Outside the golden hue of sunset started to glow down upon stretches of increasingly populated villages. The Doctor looked at his watch and nodded confirmation that the train should be arriving at Rawalpindi at 5pm. He was a little premature. We arrived at 7pm. The Doctor bid me farewell, and with a sad expression, good luck.

I began to regret not getting off at Lahore. My head was pounding and I was feeling confined in my now empty and dark compartment. I locked the doors and swallowed two Paracetamol. This had the makings of a long night. I lay back in my sleeper bed, and listened as the train slowly eased out of the platform. The rhythm of the train, the dark carriage and the security of the locked door meant I could sleep a little.

Resources: How to Guide – Iran to Pakistan overland