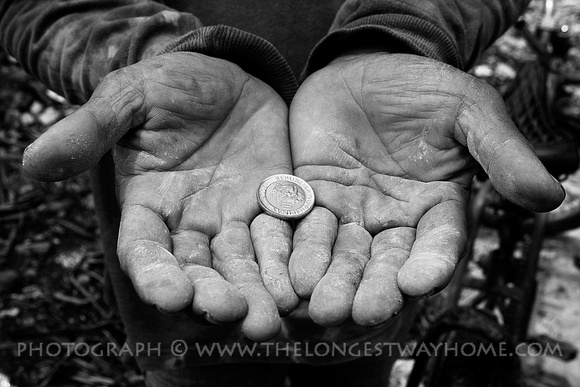 How much money does a person from the Philippines earn or make a day?

From the least paid all the way to the president, I took to the streets to try to find out. The results, while holding no scientific nor Wall Street Journal like quality, are interesting nonetheless.

I say per day, as when I ask people on a lower-income, this is what they quote me, exactly:

A middle-income person is more reluctant, but will quote by the month using the term “around“.

Upper income people usually just smile. But will happily tell you what everyone else makes.

Cost of living in The Philippines (average, local)

Here’s a rough idea of what local things cost so you can see what a wage quote lower down must be spent on:

The reality of wealth distribution in the Philippines:

A village girl or boy brought to a town to work as a house keeper can be paid as little as 0 to 50 pesos per day. They are given accommodation and meals (basic, as in rice and the floor).

Official minimum wage in The Philippines is based on regions, and noted later on.

The Jollibee starting salary is 250+ pesos per day

(it should be noted that government regulation states benefits should be given to every permanent employee. So most employers only hire people for 5 months then release them. Supermarket chains and fast food restaurants in particular)

Note: there are hidden extras in many middle-income salaries. Many will also be given a free sack of rice every month, a health care plan and transport. Depending on the job and circumstances.

How much does a Government official in The Philippines make?

Now this was hard to find answers on, I wonder why?

The president’s “official” salary was easy to find out. As for a Governor, Mayor or other government officials no one seems to know exact 2014 salaries.

If you happen to know, then please leave a comment (references would be great).

Salaries of Government officials in the Philippines:

President of the Philippines salary is: 67,750

Again many thanks to Marnie for finding this list.

Note: I can’t help but add in here about the massive fringe benefits politicians get in The Philippines. Not forgetting the wealth of political dynasties, perks, expenses, shady business partnerships and corruption the countries politicians have been known for. They are among the richest earners, one way or another. See further below for an example of a $20,000 steakhouse dinner

Official Minimum Wage in The Philippines 2014

The official minimum wage in the Philippines set by the government is broken into regions (based on non-agriculture salaries, upper limits).

Keep in the mind the above is the official minimum wage and not always what is paid out. Tax is also applicable at 32% for all salary earners.

Diplomats earn the same as their civil service salaries back home, plus hardship bonuses (differs depending on origin country). Least to say, they are far from suffering judging by the luxury apartments/ buildings, most live in.

Non owning manager of a corporate overseas business: $USD 80,000 + per year depending on business. (plus other benefits)

Unqualified expat looking for a job – same as a local, unless you get lucky.

I’ve seen and heard of many a bad story due to the above.

Equality & fairness in the Philippine salary:

The above is not an official list of salaries by some government body. These are quotes from people either in that job, related to it, from the street or from a news agency and treated as a given average.

What struck me was the salary scale of a call center employee vs a teacher or even a doctor. Call centers are booming in The Philippines, and many graduates would rather work in a call center, rather than in their chosen profession.

Apart that is from those looking to leave the country, via their profession.

In my time here I’ve met a staggering amount of Filipinos looking to work overseas. This is actually an industry itself. And no, I am not talking about the return of wealth from overseas workers.

I am talking about the amount of businesses within the Philippines dedicated to getting people jobs overseas. And, to a lesser scale, simply taking the money with idle promises.

Today’s figures state there about 12 million overseas Filipino workers. The population is around 95 million. That’s roughly about 10% of the population that work overseas.

The unemployment rate is around 8% give or take. How this is actually calculated is beyond me as there’s very to back this up. Living off the land out of necessity and eating nothing but plain rice is considered employed.

Rather than the usual developing country heartache of focusing on people eating nothing but plain rice, children falling asleep due to hunger, or no medical care. I’d like this to highlight the flip side of things.

In 2009 as the Philippines was struggling to cope with the world food crises former President Arroyo spent $15,000 and then another $20,000 on two meals for 60 colleagues whilst visiting the U.S.A. One of which was at a steakhouse where the bill was allegedly footed by a nephew of former president Marcos. The story was reported in many places. Here’s a brief ABS-CBN report.

The follow ups to this were met with non-statements, allegations, rebuttals and the usual “the head of state desires good treatment because …”

It’s become somewhat of a “right” for a politician in The Philippines to be treated like a celebrity and demand certain “privileges”.

Conclusion on earning and salaries in The Philippines:

This should give readers a rough insight into how mixed, cumbersome, irrational, fraudulent and bizarre salaries are in The Philippines.

From hand to mouth non earners, to teachers earning less than call center staff to Presidents and their entourages eating $20,000 dinners.

It’s a bizarre scale, and I somehow I don’t think The Philippines is alone in the world in this regard.

And, it would be interesting to see if anyone else can add to this, or disagree with my findings, either in the Philippines, or globally.

I am sure wealth distribution anomalies happen elsewhere too.

I recommend you try my own hotel search for The Philippines

108 Replies to “How much does a person from the Philippines earn?”