I wouldn't classify the travels of Ross Pringle as being great in the epic scale of around the world on foot. What I would say is great is the fact Ross wrote about it all in wonderful detail and with some self humor thrown in. Not only that, but he ended up getting engaged at the end of his journey which is a great ending to a trip. The main fact is that many blogs or websites out there do not share the whole journey. Ross' blog is great in the sense that just about everything he did, he recorded. 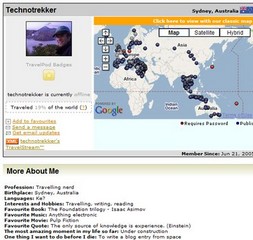 Most of his blog is about a guy and his laptop traveling overland from Sydney to Scotland. His route was - Australia, Asia, Russia, Scandinavia, Europe, Middle East, North Africa, and the Mediterranean. Ross began his journey in 2005 and finished around April 2007, though he has traveled since.

With over 228 entries Ross describes everything from leaving his roots in Oz to meeting the various freaks we do come across in travels to getting stuck and breaking away from the addictiveness of South East Asia.

Ross' writing is that of his own experiences, and the effects people, places and travel had on him. Going through his blog it's easy to relate to him and what he is describing. The other thing seriously lacking, thankfully, is ego. Too often, for my liking anyway, we come across egos on the road. The guy who's been everywhere and done that, and knows how to never shut up about it. Ross is very open and honest about his mistakes, learning's and opinions.

One of the last of the travel blog journey writers

Another great aspect of Ross' travels is the amount of time and effort he meticulously put into his blog. He writes an article about his laptop and camera which is worth a read itself to those thinking of going on the road like that. Due to his tech gear Ross has some great photo's online (over 4000!) throughout his blog as well as research notes on the places he has been. You can almost imagine the guy writing away every night in a hostel to get this stuff out there.

To anyone considering an Australia to UK trip I recommend this blog, or indeed if you just want some good online reading. It's one of the only fully complete blogs I have come across that's both written well, and presented well. Here's his blog - TechnoTrekker