Guide to Temples & Buildings destroyed in the
2015 Earthquake

I will be updating it regularly. It's very early to produce a complete inventory due to the huge humanitarian relief effort that's currently ongoing along with the physical destruction around the valley. Hopefully in the next few weeks the list will be completed. Feel free to contact me if you have any data.

Kumari House after the earthquake in Kathmandu Durbar Square

Kathmandu Durbar Square suffered greatly in the earthquake. There are however several iconic temples and buildings that have survived. These include Kumari House, Taleju temple and Jannath temple. 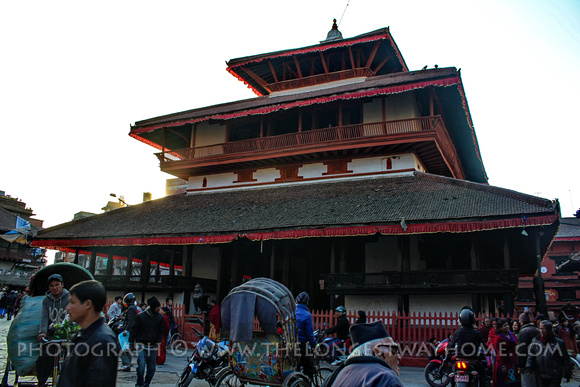 Completely Destroyed. The very building that gave Kathmandu its name has been destroyed. It will have to be completely rebuilt. There was a plaque inside Kasthamandap that dates to 1048 which was enough to make it one of the oldest buildings in Nepal. 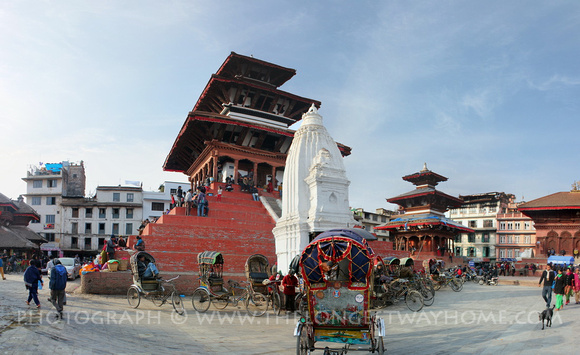 Completely Destroyed. In the foreground is the mighty Maju Dega temple that once dominated Durbar square, it was obliterated. In the background is the three-roofed Narayan Vishnu temple which was nearing reconstruction. It too was completely destroyed. 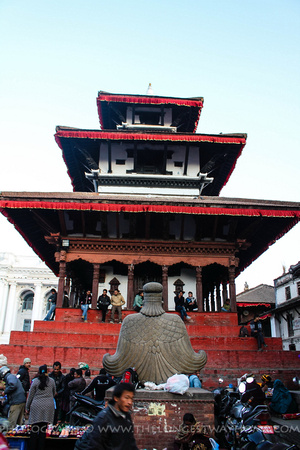 Completely Destroyed. Built in 1680 the Trailokya Mohan has been completely destroyed. All that remains is the highly detailed stone Garuda kneeling before it. 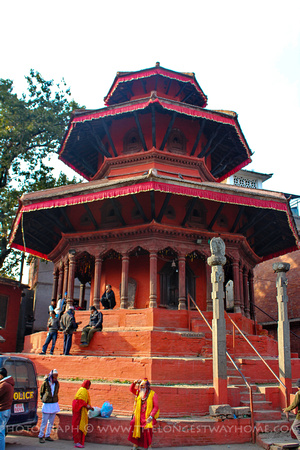 Completely Destroyed. Built in 1649 by King Pratap Malla this unusual octanganal temple had images of Krishna and two goddesses inside that bore a striking resemblance to the king and his two wives. 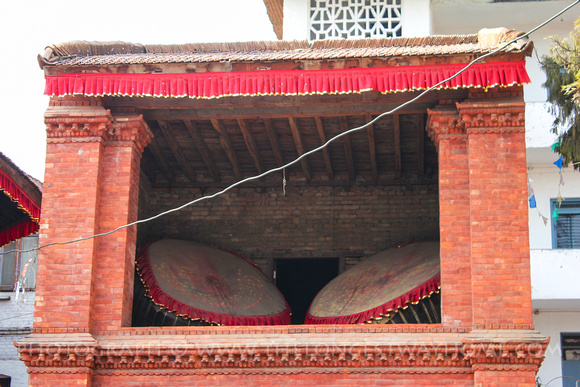 Partially Damaged. A pair of huge drums on a raised platform. These were once used to warn trouble as the Durbar Square armoury is close by. The outer wall has been destroyed on one side. Repairable. 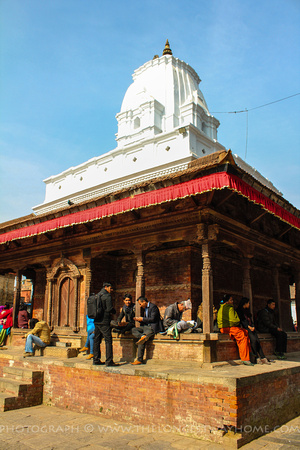 Completely Destroyed. A simple three-tiered Vishnu temple, the other that stands out has a white chedi at the top. Originally built in 1681 the Kakeshwar temple was rebuilt after the earthquake of 1934. Today it's no more. 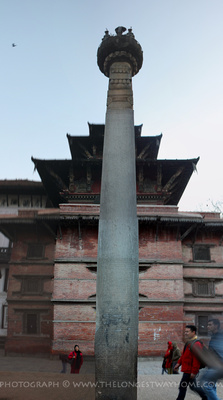 Partially Destroyed. The tall column with King Pratap Malla and his family broke in two. The upper portion depicting the king with his family fell to the ground. It is repairable. 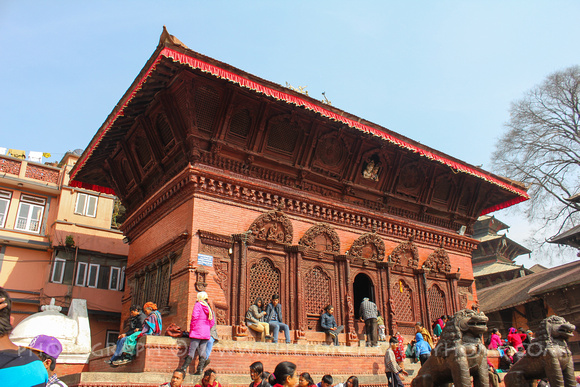 Mild Damage. The rectangular temple made of brick and wood with two stone lions guarding it. This is Shiva Prabati Mandir or Nawa Jogini and it’s highest temple of ritual worth and power in Durbar Square. Cracks now apear in the building but it is very repairable. 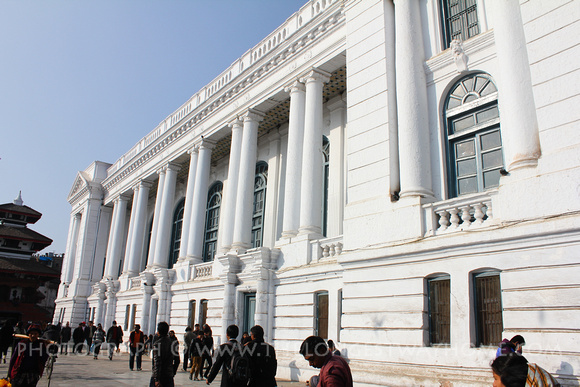 Partially Destroyed. With its strong white columns a European influence is obvious. It was during the Rana period, where there was a strong British presence, that this building was erected in 1908 to serve as a reception hall to foreign dignitaries. The souther facade collapsed however the front of the building remains intact but with many cracks. It is repairable. 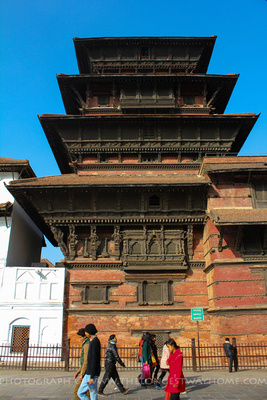 Partially Destroyed. Also known as the Nine-story Palace Basantapur tower was one of the most iconic temples in Kathmandu Durbar Square. It lost the top two floors in the earthquake. It is repairable. 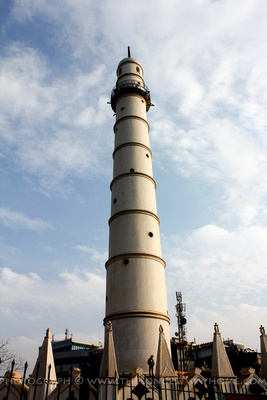 Completely Destroyed. (Located outside Durbar Square) Dharahara or Bhimsen tower was a nine-storey building constructed in 1832. On a (rare) clear day it offered views across the city.

Temples/buildings that survived the earthquake in Kathmandu Durbar Square

Patan's temples suffered a lot of damage. Most of it occurred in Patan Durbar Square. Cracks and breaks are showing on many buildings around the square.

To the north there is good news as the Golden Temple remains intact. Likewise the Kumbeshwar Temple Complex has survived though the main temple is leaning slightly.

To the south the Machchhendranath temple remains relatively unscathed. Kumari house to the west is also safe. 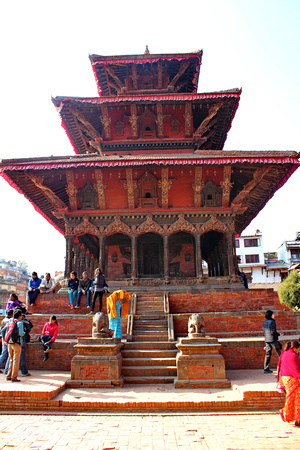 Completely Destroyed. One of the most outstanding temples in Patan. Built in 1706 it is dedicated to Shankar Narayan deity who is half Shiva and half Vishnu. 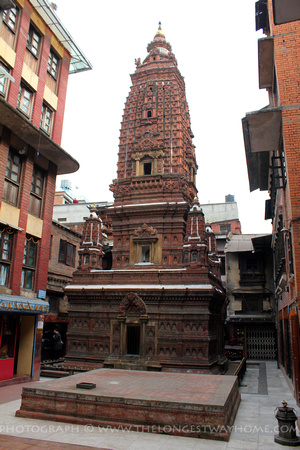 Damaged (repairable). Nicknamed the temple of 1008 Buddha's it was constructed in 1556 by a devotee who wished to honor buddha. It took two generations to complete it. The exterior building is fine. However, the temple itself has cracks. It is repairable. 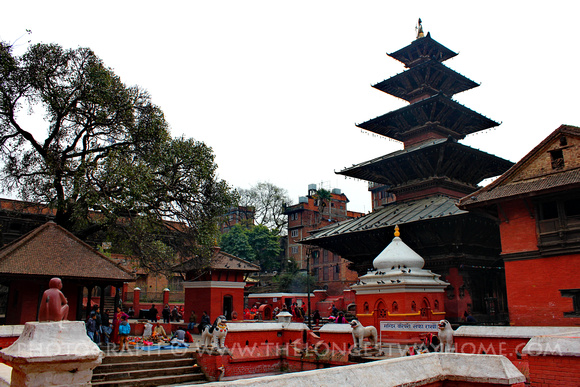 Damaged (repairable). Legend has it that this complex is where Patan or rather “Lalitpur” got its name from. This complex contains several buildings and temples. Many of these buildings survived with minor damage. However the main Kumbeshwar temple tower now stands at an angle and needs repairs before it topples over. 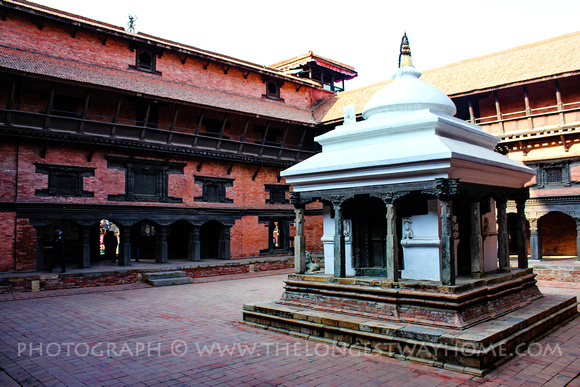 Damaged (repairable). In the center is a temple/shrine to Narayan and the Patan Museum. The building itself is still standing but has several cracks and interior damage that need to be repaired. However, the temple/shrine itself is fine. 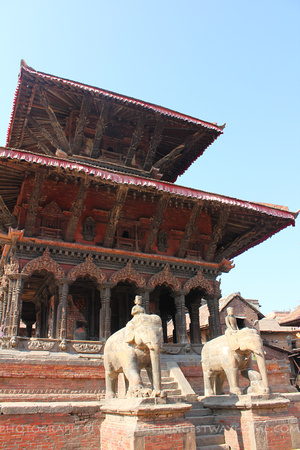 Damaged (repairable). Dedicated to Vishwanath, a manifestation of Shiva. It was built between 1676-78. There are cracks in the outer stucco and the inner brickwork. 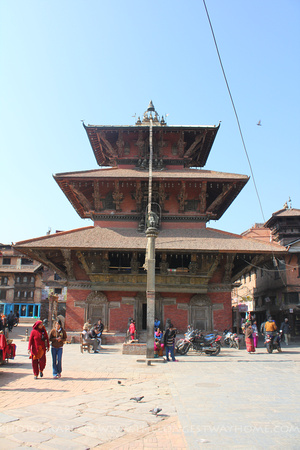 Damaged (repairable). Built in 1680 at a time when all three kingdoms in Nepal were at peace. It’s dedicated to the Newari god of traders. There are exterior cracks. The pillar and fire pit in front of it still stand. It is repairable. 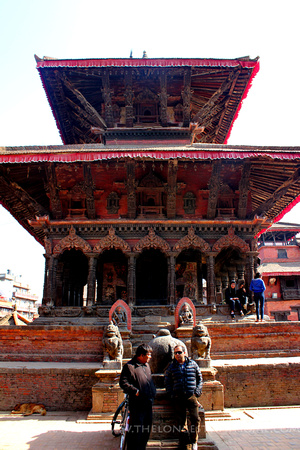 Completely Destroyed. The oldest building in the square which had two stone lions guarding it at the front. Dedicated to Vishnu/Narayan it was built in 1566. 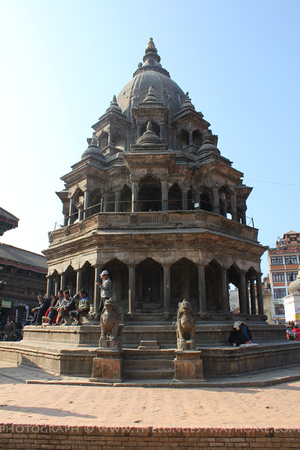 Damaged (repairable). The attractive octagonal solid granite temple was built in 1637-47 by Siddhi Narasimha. It is dedicated to Krishna. Though supported by scaffolding, it is repairable. 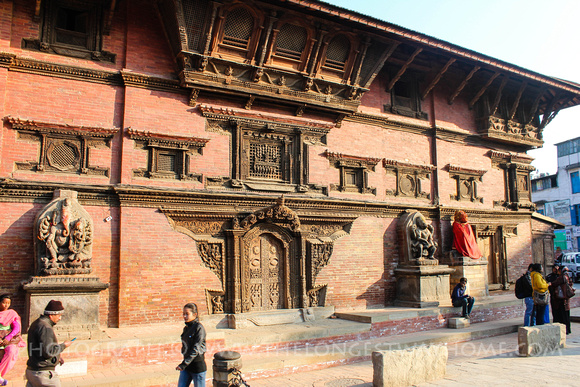 Damaged (repairable). There’s a courtyard that still contains fabulous woodwork and a sacred stone. There’s a royal bath complete with basin and a gilded spout. The rear of this Chowk has been destroyed but the rest remains intact. 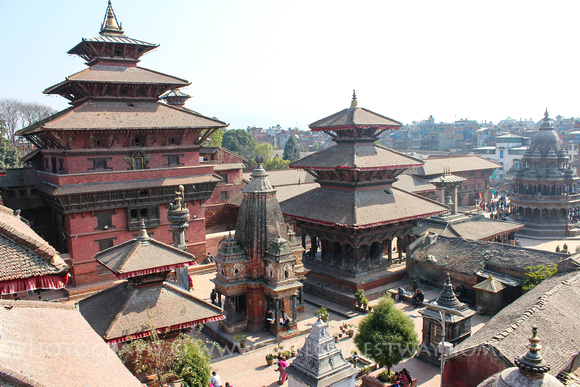 Damaged (repairable). Degutale Temple is the tallest in the square and was built in 1597 before being rebuilt again in 1641 before being destroyed by fire in 1654. The current building was erected in 1661 and suffered minor damage. Behind it is the very ornate octagonal temple to Taleju. This temple was rebuilt in 1671 after the fire of 1654. The top tier roof fell during the 2015 earthquake. Both buildings are repairable

Temples/buildings that survived the earthquake in Patan

The majority of Patans temples have survived though nearly all in Durbar Square took some damage. A complete list of all the temples in Patan including map locations is available in my guidebook to Patan city

Bhaktapur's suburbs took more damage than any of its three main squares. The iconic Nyatapola temple and most of Taumadhi square remains standing. Dattatreya Temple in Dattatreya Square is also relatively unscathed.

However, Bhaktapur Durbar Square did lose some icon temples and buildings 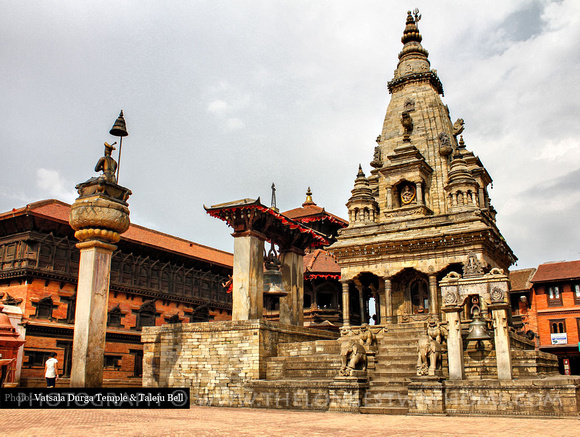 Completely Destroyed. built in 1672 by King Jagat Prakash Malla this beautiful stone building was a favorite for many people to sit out on and watch the sunset in Bhaktapur durbar square. It is no more than rubble now. 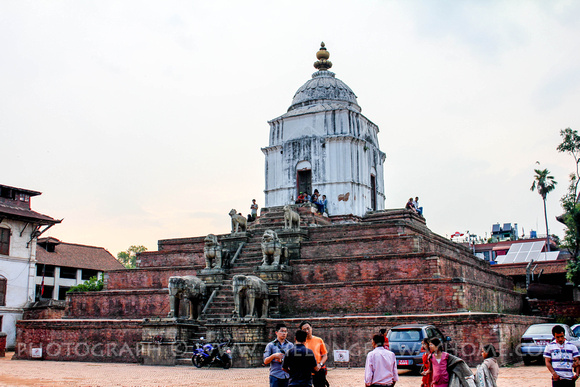 Completely Destroyed. Originally destroyed in the big earthquake of 1934 it was hastily rebuilt in 1936. It's been called the ugliest temple in Bhaktapur due to its simple restoration work. Today it's no more. 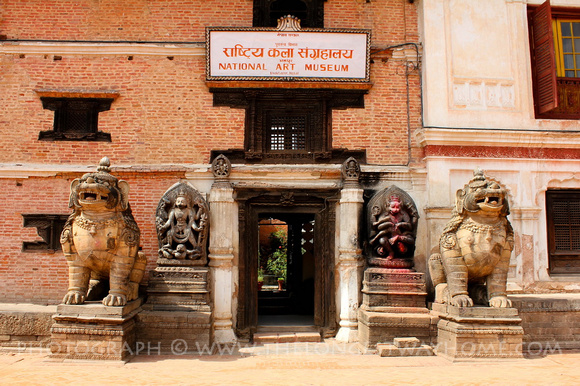 Mild Damage (repairable). Once known as Malati Chowk the western end of the royal palace now houses the National Art Gallery. Inside there was some damage to items. However the exterior has only minor damage. 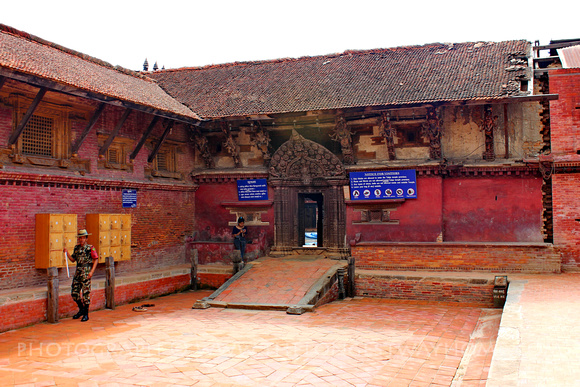 Mild Damage. Said to be the oldest remaining part of the palace. Entry is strictly for Hindus only. The temple received only mid damage. 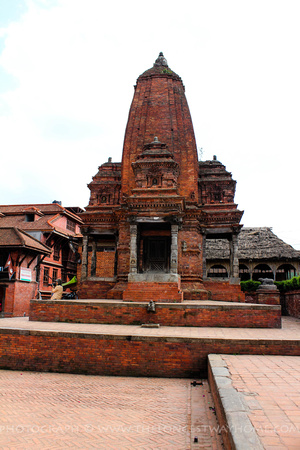 Mild Damage (repairable). A Red-bricked temple in Gum Baja style dedicated to Shiva. It is an open shrine surrounded by four pillars in Bhaktapur Durbar Square. 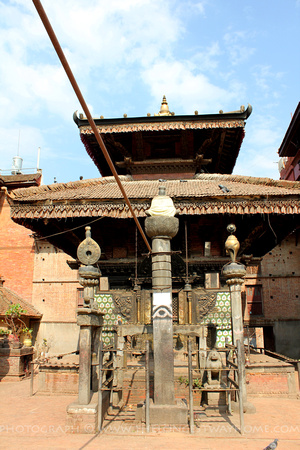 Partially Destroyed. One of the oldest temples in Nepal and an important place of pilgrimage in Bhaktapur. An inscription inside read 1080 AD. This is backed up by the image inside it which had 12th century stylings

Temples and buildings that survived the earthquake in Bhaktapur

The majority of Bhaktapur's temples have survived. A complete list of pre-earthquake temples including map locations is available in my guidebook to Bhaktapur

The majority of the Kathmandu Valley's temples have survived. Though the majority have sustained some form of minor damage. As a tourist one would not notice most of this damage

Swayambunath (Monkey) temple survived with only a few cracks though Anantapur (one of the large white chedis) was destroyed it is quite repairable.

In Boudhanath damage is minimal. The Boudha Stupa itself has only one large crack at its base which is very repairable and some metal work got damaged.

In Pashupatinath damage was again minimal. Jayabageshwari temple has some damage. However Pashupatinath and the ghats are undamaged.

Restoration of the Kathmandu Valley Temples

Soon after the 2015 earthquake the Nepalese Prime Minister announced that all the ruined temples would be restored. That's a noble but ambitious statement. The truth of the matter is many of Nepal's historic buildings have needed restoration for many years, let alone structural reinforcement. The responsibility lies with the Department of Archeology. The problem has always been a lack of funding.

Though tourists saw a near year on year increase in entry fees few saw any improvements. Allegations of corruption and slow moving red tape have always gone hand in hand.

Over the past few decades many temples have been restored using private donations and funds. Examples include Swayambunath and Chyasalin Mandap.

Here you can read more about Nepal's Department of Archeology's plans.

This page is an ongoing project. If you'd like to help please contact me with details of destroyed temples or buildings. With thanks to Amir Bagale & Ajaya Manandhar for updates.