Your Guide to Boudhanath

Boudhanath (बौद्ध स्तुपा) is also know as Boudha, Bouddha or by its original Newari name Kasti chaitya and is an area about 7 kilometers from Kathmandu city center (close to the airport). It is home to one the most important stupas outside of Tibet and one of the largest stupas in the world; the 5th century Boudha stupa.

Surrounding the stupa is a pleasant courtyard that contains the Tamang Gompa amongst numerous traditional shops selling singing bowls, thankas, prayer wheels and much more. There are also quite a few cafes and guesthouses in the immediate area.

Boudhanath survived the 2015 earthquake however extensive repairs were needed and carried out throughout 2016. On the 14th of November 2016 the repairs were completed and celebrated with the return of prayer flags around the stupa.

Many Buddhists today take pilgrimages to Boudhanath. Everyday, throughout the day, you will see many monks and people ritually walking around the stupa.

Do remember to walk clockwise around the stupa. Keeping the stupa to your right. Prayers wheels should also be spun clockwise. You can enter and walk on the white dome of the stupa. If you are curious, here are what all the parts of the Stupa mean.

The first surrounds a woman who asked the king for land to build a shrine to Buddha. He agreed to let her have enough land that a buffaloes skin could cover. The woman cut a buffaloes hide into strips and made a large circumference. The king kept his word and so the huge stupa was built.

The second legend says that a finger of the Buddha is buried under the stupa. Today many locals still believe this, however the inside of the stupa is off limits to confirm.

Must see highlights around Boudhanath

If you are in Nepal for one of the many festivals it's worth going out to Boudhanath at night to see it lit up!

If you want to make a full day of it then Pashupatinath is within 30 minutes walking distance.

Tibetan literature that mentions emperor Trisong Detsen (755 to 797 CE) constructed the stupa. However Nepali manuscripts date it further back during the reign of King Manadeva (464-505 CE) and further again to 400 CE during Licchavi king Vrisadeva / Vikramjit's reign when it documents mention a Kasti stupa. 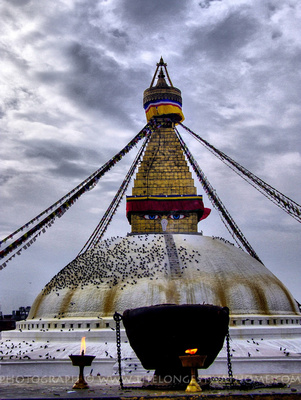 It's here the story of King Vikramjit links the Narayanhiti palace in Kathmandu to the creation of the stupa. It's said that there was a terrible drought in the Kathmandu Valley and so the king consulted with astrologers. They told him the drought would end if a sacrifice was made of a man with thirty two virtues (royalty).

The King told one of his sons to visit Narayanhiti at night, where he'll find a man there. The kings son should cover his eyes before killing this man to end the drought. Dutifully the kings son carried out the request only to recoil in horror after the deed to discover he'd killed his own father.

The drought ended and the kings son sought the advice of priests to redeem his act. They told him to release a flying hen and where ever it would land he should build a stupa. The hen landed where the stupa stands today beside the Ajima shrine which was already under construction. The area had been particularly hard hit by the drought and so locals had been collecting dew in the morning.

The Newar word for Dew is "Khasu"(खसु) while the name for droplets is "Ti"(ति). A combination of the words results in Khāsti or Dewdrop Stupa.

So the earliest known name for Boudhanath is Khasti or Khasa Chaitya which comes from the Newar Chronicles.

There is a possible link between Boudhanath and Swayambhunath which involves the Natha (a Hindu cult who also believed in Buddhism and Macchindranāth. However, Boudhanath does not have any written history that involves the Natha. Though the presence of the Ajima shrine may well be another link as the Goddess is revered by Buddhists and Hindus alike.

In all likelihood there may have been many variations of the stupa complex over the centuries and could well date further back again.

After the 2015 earthquake the stupa's central pinnacle was damaged. 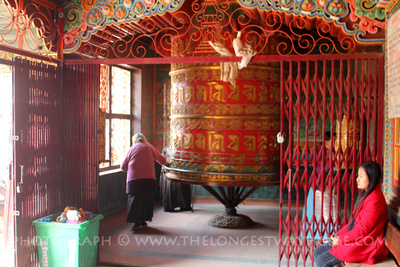 There was also damage to the stucco work of the main dome. By October 2016 the work was completed in record time compared to many other heritage sites in Kathmandu.

Controversy ensued however with the construction of large LCD monitors around the stupa reciting the life of the Buddha. They were quickly removed during a public outcry at the commercial aspect of this. A comment was made that these screens were only going to be temporary. The price of the tickets into Boudhanath then went from 250 rupees to 400 rupees.

There is also some controversy surrounding the common name Boudhanath. Newari communities in the area are requesting the stupa be known by it's original name of Boudha. Thusly dropping the "nath" part of the name which is largely noted as being Hindi. Read more about how Swayambhunath and Boudhanath got their names.

The current fee for foreigners is 400 rps. The ticket offices are located at all the major streets leading into the square containing the stupa.

If you are staying in a local guesthouse you only need to pay once. The ticket offices close in the evening if you want to get in for free.

Things to do & visit around Boudhanath

Visit a monastery: There are over twenty of monastery's (Gompas) around Boudhanath that you are free to visit. Not all are open and although they look close in the map they are often down small side lanes.

Tamang Gompa remains the most famous and popular. However a visit to smaller monasteries like the old and new Dazang monasteries can be a more solitary experience. Likewise to the north Shechen Gompa is rarely visited by tourists and has several monks in residence.

It's important to note that the monasteries are not "tourist attractions". Going in with cameras blazing these days will likely have a monk or caretaker shoo you away. Knowing a little bit of Nepali or Tibetan will open doors as will some understanding of Buddhism.

Taragaon Museum there's a heritage walk of sorts just to the north east of the stupa. Though it's more a "peaceful short walk away from the traffic" rather than getting to see much. At the end of the walk near the Hyatt hotel you will be close to the famous and privately owned Taragaon museum.

Inside are displays from various painters, photographers and artists representing a local and international perspective on Nepal from cultural history to modern lifestyles. It's certainly one of the better museums in Nepal.

Souvenir shopping in Boudhanath: there's no shortage of souvenir stalls and shops in Boudhanath. Surrounding the stupa are many shops selling Tibetan singing bowls, jewelry brass work and incense. Prayer flags are found everywhere along with Thangka paintings.

Souvenir prices in Boudhanath is little different to Kathmandu. It's a catch-all for tourists. Therefore it helps to know a little about the prices before beginning the bargaining process.

By taxi: A taxi to Boudhanath is the most common form of tourist transport. From Kathmandu city to Boudhanath costs around 400 rupees. Be sure to tell the taxi driver you want to get off at the Boudhanath main gates.

By bus: For the more adventurous you can try to take a mini-van bus from Kathmandu city. There are direct mini vans to Boudhanath departing from anywhere around Ring road. Or closer to the city center from Jamal bus stop just before Rani Pokhari on Kantipath Road (zoom out of the map to see the bus stop), the cost is about 25 rupees.

Hyatt Regency Kathmandu - 24 hour generator, very plush. (ignore their map, they are literally around the corner from the stupa).

The above page from my guidebook to Nepal shows who places to stay and visit in Boudhanath not found anywhere else.

Looking for more accommodation in Kathmandu? Try my hotel search below for the best rates or download by travel guide.

Restaurants & places to eat near Boudhanath

There's no shortage of good restaurants surrounding Boudhanath Stupa. Quite literally in the immediate surrounds are dozens of restaurants that slowly spread out into the sides streets.

Though many people put an emphasis on "Tibetan" style food in this area, there's an eclectic collection of places to eat that's very similar to restaurants in Kathmandu.

Cafe Du Temple is one of the favorites of many travelers with a typical "everything on it" style menu. To make up for this there's an epic rooftop view of the stupa.

Flavours Restaurant was first mentioned here a few years ago with nice interior seating or a lovely courtyard. Try the lemon chicken & mash which is excellent alongside a bevy of vegetarian options. There's a small bakery here worth looking at and choosing yourself.

Roadhouse Cafe has become Nepal's best known pizzeria. It's got a high view of the stupa while serving up calzone to vegetarian pizzas.

Stupa View Restaurant another fine restaurants offering great Tibetan food from Thukpas, Balep (Tibetan bread) and chow mein to momos and even the odd not so Tibetan Pizza. They often have chang a millet inspired Tibetan beer drank through a bamboo or metal straw. Coupled with the namesake of a stupa view it's makes a great choice.

Due to the COVID-19 Pandemic many businesses suffered in Boudhanath. Some took out loans to get them through the initial year. Others relocated or merged with other businesses. As the pandemic continued, so did the loans. As such, so expect a changing landscape when it comes to restaurants and cafes in Boudhanath. This will likely continue for years to come.