About the Nyatapola Temple

The Nyatapola Temple is located in Taumadhi Square, Bhaktapur, Nepal which is about 12 km from Kathmandu city. in Bhaktapur Nepal is ancient city about 12km outside of Kathmandu City.

Built between 1701 and 1702 over 5-7 months by King Bhupatindra Malla it has 5 tiers and is one of the tallest temples in all Nepal measuring over 30 meters..

The Nyatapola temple is dedicated to the Hindu goddess Siddhi Lakshmiare the wrathful manifestation of the Goddess Durga.

Nyatapola means “5-story temple” in the Newari language coming from the word "Nyaa" which is the number 5.

The temple survived the 1934 earthquake which destroyed over 1/3 of the other temples in Bhaktapur.

Legends & history of the Nyatapola temple

In 1702 CE it is said that the god Bhairava (Hindu -Bhairab) became angry and cause d havoc among the local community. King Bhupatendra Malla prayed to Parbati for help. Parbati came to the area in the form of Siddhi Laxmi and took Bhairab in the palm of her hand. She then began the construction of a temple (Nyatapola) dedicated to Siddhi Laxmi which would be much larger than his own temple and stands close by. 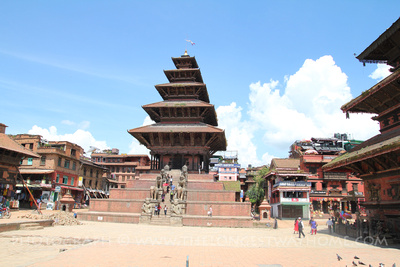 Along the stone staircase leading up to the Nyatapola temple are several guardians on either side. The first are Bhaktapur’s strongest men, Jayamel and Phattu, (famous wrestlers) who allegedly had the strength of ten men. Next are two elephants. Then two lions followed by two griffins. Finally there is “Baghini” and “Singhini”, the tiger and lion goddesses. Each guardian is said to have ten times the strength of the previous.

At the top of the temple is a locked shrine where there is a statue of Siddhi Laxmi said to be the fiercest in all Nepal. The only people every allowed in to view it are the local priests. You can however view carvings of her on the Torana above the door. Likewise there are about 180 roof struts which also have depictions of her along with Hindu and Buddhist carvings in line with Newari traditions.

Interestingly the Bhairab temple nearby has a statue of him but it's very small in comparison. All the same, it is highly decorated.

Many people doubt how such a magnificent temple could have been built in only 7 months. However, the Nyatapola temple is one of the few buildings in Nepal with very accurate daily records which have documented its construction called the Siddhagni Kotyahuti Devala Pratistha manuscript.

How Tall is the Nyatapola Temple?

The Nyatapola Temple is just over 30 meters (98.5 feet) in height. It is the tallest temple in all Nepal and listed as one of the tallest buildings in Bhaktapur.

It has 5 roofs which makes it a five storey building. It's height is exaguratted as it sits on a series of brick platforms which nearly doubles its height again.

The Nyatapola Temple was renovated in 2021. The roof was taken down, and replaced again. Within a few months grass was once again growing on it. This has been the way for centuries and the clay roof tiles are built to handle it. So if you see lots of grass on the roof levels then keep in mind it's a natural occurrence and not due to a lack of care.

Entrance fee for the Nyatapola Temple

There is no fee to see nor climb the Nyatapola temple as it is a part of your Bhaktapur ticket price. However you cannot enter into the inner temple as it's reserved for priests only.

The current fee for foreigners is covered under the main Bhaktapur entrance fee.

If you are planning to stay in Bhaktapur then when purchasing your ticket show your passport and you can get the same ticket extended for one week with no extra cost. You can read more about Bhaktapur ticket prices here.

Directions to the Nyatapola temple

By foot: Once inside Bhaktapur city simply walk to Taumadhi Square. The Nyatapola temple cannot be missed due to it's large 5-tier roof and stone steps.

Looking for more accommodation in Bhaktapur? Try my hotel search below for the best rates.