Your travel guide to the Golden Temple in Patan

About the Golden Temple

Located in north Patan the Golden temple is offically known as Hiranya Varna Mahavihar (हिरण्यवर्ण महाविहार) or locally as Kwa Bahal (क्वबहा). The translation means "Gold-colored Great Monastery". It is perhaps the second most popular attraction in Patan after Patan Durbar Square.

The temple was built in 1409 and is in fact a Newari Buddhist monastery. The name "golden temple" came about through tourism and a shortening of it's translation more than it actually being made of pure gold. Most of the temple is actually polished gilt copper which gives it a fantastic golden shine.

Inside the main courtyard there are probably enough artifacts to keep most historians happy for a full day. Do keep note that leather items are not permitted inside.

At the main entrance there was once a duel fought between a Brahman and Vajracharya Buddhist priest. The Vajracharya priest won when his wife threw here sari over the Brahmans head which led to the priest decapitating him. It’s said the severed head is still used in ceremonies today!

Inside the Golden temple courtyard in Patan

At the entrance way are two large brass guardian elephants and riders. Directly in front is a lavish shrine with a silver and golden chaitya. While you can’t photograph inside the shrine you may photo around the interior of the courtyard.

Going clockwise around the central shrine you'll see newly added (1918) brass monkeys holding out jack fruits as offerings. Behind them are large bronze Bodhisattvas. Three are Padmapani Lokeshwar and the fourth is Manjushree.

The main shrine (directly behind the smaller one) contains a statue of Sakyamuni and a Buddha image which again should not be photographed without permission. The temple is dedicated to Guatama Buddha.

It's honestly worth moving closer to many of the artifacts found inside the courtyard as many are highly detailed. It's also quite rare to get this close without being inside a museum!

There was renovation work on the Golden Temple in 2017 with the courtyard remaining open. The same happened in 2018 though again it not  disturb visitors. 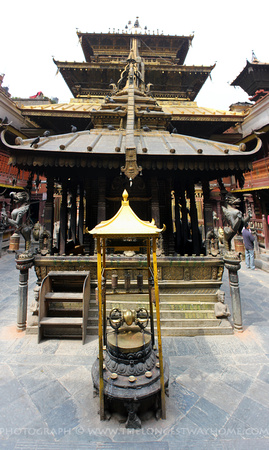 The temple itself suffered a little damage in the 2015 earthquake. Tiday the courtyard and exterior is accessible and you'd barely notice a difference!

Let's not forget the "golden temple" is actually Hiranya Varna Mahavihar a Newari Buddhist Monastery. If you are facing the two golden elephants look to your right and you'll see a small door.

Enter inside and climb up the stairs to visit the monastery. It's really just a small room with practicing monks. Permission is also required to enter but there's rarely anyone around to ask.

My advice: be as quiet as possible and restrain from taking photos inside so nobody will be bothered by you entering.

Entrance fee for the Golden Temple

This temple is not included in the Patan Durbar square ticket price as it's outside the square. The current fee for foreigners is 50 rupees.

Map of the Golden Temple & Patan

Use this map of Patan for to locate the Golden Temple and other highlights in Patan. For a better map download my full travel guide to Patan

The Golden Temple is located at a junction in north Patan just a short distance from Durbar Square. There are two entrances. One to the side and another to the rear.

See my travel guide below for full walking directions.