Your guide to the Vatsala Durga Temple & Taleju Bell

Guide to the Vatsala Durga Temple

It was built in 1672 by King Jagat Prakash Malla while the Taleju Bell which is in front of the temple was placed there by King Jaya Ranjit Malla in 1737.

Sadly the temple was completely destroyed in the April 25th earthquake in Nepal. Rebuilding started in 2017 and was completed in 2021. Several smaller monuments have been rebuilt near it.

The Vatsala Durga Temple is made from sandstone and sits beside King Bhupatindra Malla's statue directly in front of the Royal Palace of 55 Windows. Though sandstone its appearence is more of limestone.

The Taleju Bell was placed there to mark morning and evening prayers at the Taleju Temple and is undamaged.

There are several restaurants behind the temple which make for great viewing areas over Bhaktapur Durbar Square.

There is a second smaller bell on the temple's plinth which is known as 'the barking bell'. It was placed there by King Bhupatindra Malla in 1721 to counteract a dream he had. It is said that dogs bark and whine if the bell is rung.

In 2017 reconstruction work began on the iconic stone temple. Work was completed in 2021. 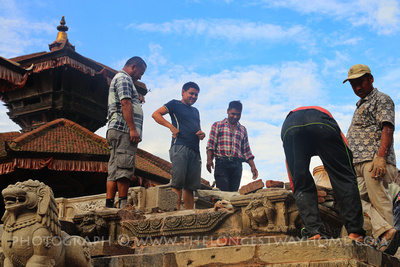 All the masonry work was done via traditional building methods. A donation list for those wishing to donate directly to the reconstruction was used to partially fund the rebuilding. All funds donated were transparent and receipts were given.

You can read more about donating and restoring the Vatsala temple here. This was one of the only buildings with cultural heritage to independently source funding. It was a huge objective considering the difficulties other buildings have had.

All other smaller temples have been restored in Bhaktapur Durbar Square. Work now moves to the nearby older palaces and temples adjacent to the square.

Interestingly the Vatsala Durga temple is built in a North Indian shikhara-style which is quite different compared to others in the square.

You could climb up the steps of the Vatsala Durga temple and watch the sun set over the square.

You could also climb up onto the Taleju Bell platform via the Vatsala Durga temple however that is no longer possible.

Ringing the bell is permitted though but be respectful. One gong should be enough!

You can read more on this list of temples destroyed in Nepal. This page will be updated when restoration is complete.

There is no fee for the Vatsala Durga Temple or Taleju as it's covered under the ticket price for Bhaktapur Durbar Square.

Liked this page? You'll love my book! It's a guidebook that's better than the rest. Yes, really! In it I cover all of Bhaktapur's attractions with well researched information, photographs and travel tested walking tours.