Your Guide to Ason Chowk in Kathmandu

Ason Chowk (Asan Tol) is located just south of Thahiti Chowk. It's an excellent place to pass through if walking to Kathmandu Durbar square on a heritage walk as it's later linked to Indra Chowk through its six roads.

Ason Chowk is primarily an old, but still very active, market square surrounded by temples and shrines. The most popular temple here is the 3-storey Annapurna temple.

Life begins very early in Ason with many tea sellers already at work by 3am. The markets equally open by dawn selling fresh vegetable produce coming in from the Kathmandu Valley.

Ason can get very crowed by late morning and most certainly by late afternoon. If you plan to do a heritage walk through Ason try to do it as early as possible to make the most of it.

Opposite Ashok Binayak/Maru Ganesh is the deities gilded attendant (a small mouse/rat/shrew). You'll see it as an elongated mouse statue along the wall of Kasthamandap.

Tradition dictates that a portion of all the rice sold in Ason Chowk must first be offered to the Goddess Annapurna.

While Saturday mornings are great for most heritage walks in Kathmandu, it's a day off for many vendors. So Ason on a Saturday morning will not have the same vibe as it does during the rest of the week.

Nobody knows the true history of Ason Chowk. At the turn of the 20th century it was noted as being a small market square. It's rise in popularity came during the Malla era when the Annapurna temple was constructed. 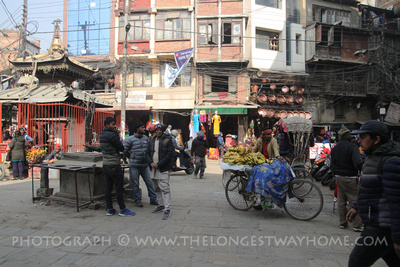 The name Ason is also somewhat of a mystery. Some say that there was a trader who rested there who when asked where he came from replied "Ana San" or "Nearby". Another popular theory is that the name came from an old Ashok tree that used to stand in the square. Though it's most likely the name came from a combination of all including a building there known as Ashwok mandap.

Today, Ason Chowk is the most lively old market you are likely to find in Kathmandu city. Filled with everything from fresh vegetables to spices and curios Ason chowk is an ancient market still surviving in modern times.

Ason Chowk as several temples and shrines around its busy main square. Though some are often surrounded by market traders all are very much active places of worship.

The Annapurna temple is perhaps Ason's most famous temple. This 3-storey Newari style temple has a rich history. highly decorated with mirrors, lamps, plates, statues and elaborate torans. Inside you might be surprised there is no deity. Instead there is a tantric sliver vessel called a kalas which is a symbol of bounty. 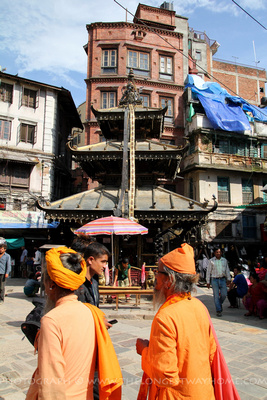 A small 2-storey temple dedicated to Ganesh which as an ornate brass roof. The inner shrine is open most mornings but by the afternoon is often locked up. The stone statue of Ganesh sits surrounded by a gilded arch. 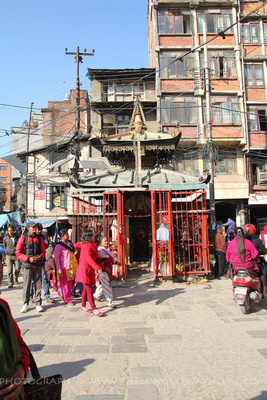 The central stone temple with a single roof is dedicated to Narayan. The building is often locked and there's a small police hut here.

Just behind the Narayan temple to the left is a small sunken shrine with a metal roof dedicated to both the Kumari and Bhairab. The shrine has been incorrectly identified on many occasions. Legend has it that blood and water will flow from this shrine if the deities are not kept happy. 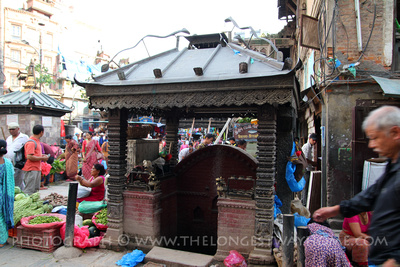 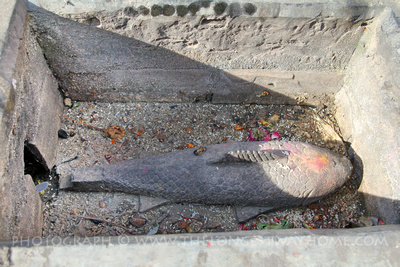 Things to buy at Ason Chowk

Ason Chowk is not a tourist market, it's local market. As such what you will find here is a mix of fresh vegetable produce, spices, dried goods and some metalware. 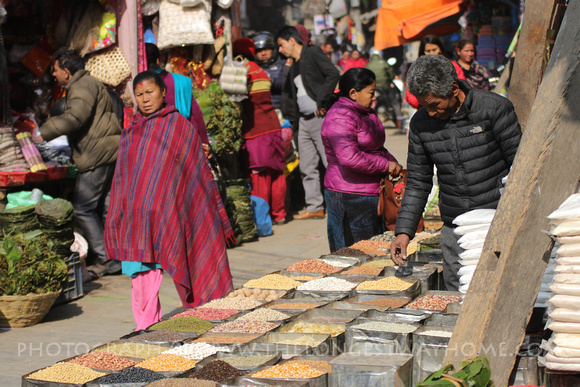 For those in search of genuine spices from Nepal there is perhaps no better place to visit than Ason. From large spice shops like the Annapurna Seed Centre to local street stalls. Cumin, cardamon, tumeric, masala, timur and host of other spices are old sold by weight or in prepackaging here.

There is no fee to enter Ason Chowk or any of the surrounding temples.

From Thahiti Chowk take the south east street which will head south h into the first of many markets in the area. There are six roads leading to Ason. Asking locals where Ason Chowk is will steer you in the right direction with ease.