Your full travel guide to the Guru Lhakhang Monastery

Located directly opposite the steps of the famous Boudhanath stupa is Guru Lhakhang Monastery or as it's more commonly called Tamang Gompa. It's probably one of the most visited Monasteries in the area due to its location and great views of the stupa.

The Ajima Hariti shrine outside the Boudha stupa is a good location to look across and find the Guru Lhakhang Monastery (Tamang Gompa).

There are three main areas to the monastery and all are worth checking out even if you are not into Buddhism or monasteries.

There's a giant prayer wheel to the left of the main entrance to Tamang Monastery which you can spin (go clockwise around it).

A Gompa is the Tibetan word for a monastery.

About the Guru Lhakhang Monastery

The Guru Lhakhang Monastery is named after Guru Rinpoche (Padmasambhava), an 8th-century Buddhist master from the Indian subcontinent, who helped establish Buddhism in Tibet.

The monastry is commonly called Tamang Gompa due to the many ethnic Tamang that live and practive Buddhism there.

The Tamang are indigenous people that are found in the mountainous Himalayan parts of Nepal. Their genetic history is mainly Tibetan but it has been traced all the way back to Mongolia. 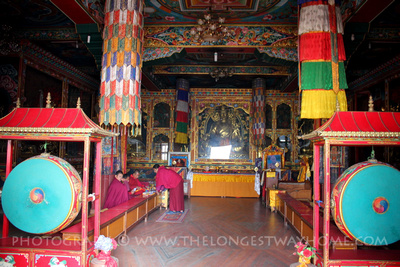 In Nepal the Tamang make up nearly 7% of the population. The Tamang by way of ethnicity are not allowed to marry outside of their own culture. This is turn has led to some genetic problems within clans.

While the Tamang roots can be traced back to Mongolia it's important to note the group has been in Nepal before the formation of state.

Within Tamang society death rituals are the most highly regarded. Within the tamang monastery you will see many murals depicting death or the wheel of life.

Ground floor of the Monastery

Before you even enter the main monastery take a look to your left. There's a squared off area with a huge near floor to roof prayer wheel inside. It's complete, working and even has the Omadi Padme Hum manta embossed on it.

Remove your shoes and walk straight into the main prayer hallway. As the Tamang monastery is active there will probably be monks at prayer. Or, if you see several rows of monks opposite each other they may be in the middle of a celebratory ritual.

In the latter case make sure you don't walk straight down the main prayer hallway. Rather walk to the left and around the large red columns.

You are free to take photographs but refrain from using flash or photographing monks without permission first.

Surrounding the inner wall are a selection of Buddhist statues and murals. All leading to the central area where there's a large statue of Buddha. Again you may circle around if there is nothing in session. Exit the hallway and ascend the stairs.

Second floor of the Monastery

As you make your way up the stairs to the next floor your can't help but notice the elaborate murals on the wall. All are highly influenced by Tibetan symbolism.

The wheel of life is of particular note as are the first floor and second floor landing murals by the stairs.

Once you've reached the main floor you'll notice an entranceway into a smaller area. There are five guardian lion statues above the elaborately painted door set into the huge mural covered wall.

Inside there's a small glass incased statue of the Buddha and things are a lot more quiet and slightly darker. There will probably be a heavier smell of incense in the room here than downstairs but less people. Again you are free to enter but remember to remove your shoes.

In front of the main doorway in the balcony area is a splendid view of the stupa. Resist the urge to take too many photos and head to the roof where you'll get the best view.

Rooftop of the Monastery

Tamang Monasteries rooftop is perhaps its biggest highlight for most tourists. Upon exiting the stairwell you'll see a small roofed area straight ahead. This again houses a statue of the Buddha.

Turn around to the front of the Gompa and you'll be confronted by the best view of the stupa which had extensive renovations completed at the end of 2016. During the day you'll get a great view of the Ajima Hariti Shrine and the whole stupa area.

At night time it's particularly beautiful once the stupa is lit up with floodlights and colorful lighting.

Turn back around and you will notice a small hut to our left. This is where butter lamps can be lit. You can buy one for about 5 rupee and light it.

There is no fee to enter the monastery. There are a few low key donation boxes dotted around each floor.