Your full guide to Bandas in Nepal

Nepal has long suffered from strikes that paralyze the country: here's a guide for tourists to minimize holiday disruption

Banda (Bhanda, Bandha) means "closed" in Nepali and it's the term used most often to describe a strike. Strikes happen on a very frequent basis in Nepal. Some are quite small and isolated while others grind the entire country to a halt.

Over the years Nepal's bandas have been noted for their unexpected announcments with several resulting in outbreaks of violence.

Most, but not all, of the recent strikes are political in nature and are generally called for the night before with little or no warning..

If you arrive as a tourist during a busy political time of year there's a strong chance you might not be able to travel the country as much as you would normally.

It's pronounced "Banda".  There are several variations in the spelling from "Bandha" to "Bhanda", in Nepal it's commonly known in the media and via the public as "Banda". 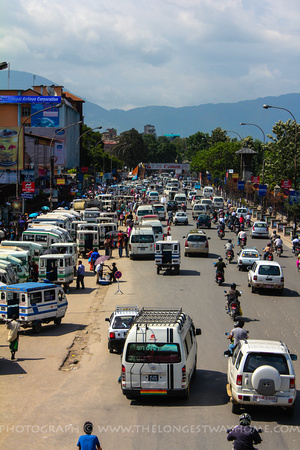 During a major strike there’s no public or private transport allowed to move. Shops, cafés, restaurants and hotels are forced to close.

At worst riot police will be seen marching around, streets of rioting people may form, car tires set alight on the roads and no one can travel. I've witnessed several holidays being uninterrupted, postponed, or even cancelled due to not knowing about Nepal strikes.

My advice in coming to Nepal is know what a Banda means, listen out for it and ask about it a few days before you travel anywhere in the country. And don't let it put you off visiting the country. So many tourists visiting Nepal are often taken back by them. Though for those going trekking they might not even come across one as these regions largely go unaffected.

In general smaller bandas are called for but tourist buses and transport are not effected.

Why are there so many strikes in Nepal?

Because the political system in Nepal is unsatable and has been for quite some time. I’m not going into the details of this as it’s not the place. It's nearly aways political. 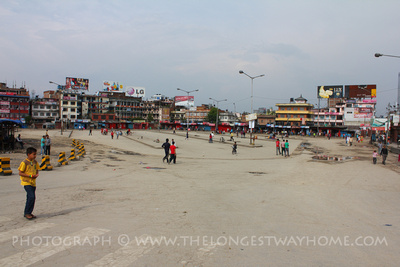 Add-on rising fuel import costs, food price increases, student fees, plus twenty something political “parties”, indigenous groups, local business groups and the odd influential person; a strike protesting something and anything can be called at any time. Usually at the last-minute. As such it can spell disaster for anyone trying to plan their holiday or travel around Nepal using public transport.

To work out how to avoid tourist travel problems when in Nepal you need to have a rough idea of the types of Banda or strike that occur here. 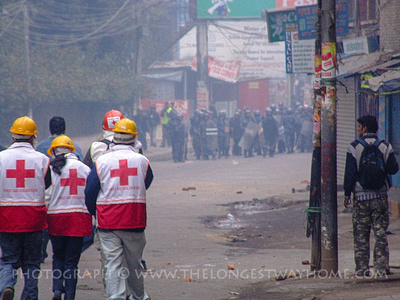 The main strikes that affect tourists visiting Nepal are national, regional and fuel strikes. This is due to the closure of everything from roads to eating establishments.

The length and severity of a Nepal strike changes depending on the motive behind the strike. A certain political party might call for a road strike or a local business strike or an all out general strike. I’ll cover the latter so you know what to expect in a worse case scenario.

Generally speaking strikes are only for one day. But might occur a few times during a week. Two day strikes can also occur regularly. Longer week-long strikes are called less frequently and usually don't last a full week.

A national strike means all government offices are closed, public transport does not run and non-emergency vehicles are not allowed to travel on the roads. Shops, stores, restaurants are all meant to shut down as well. 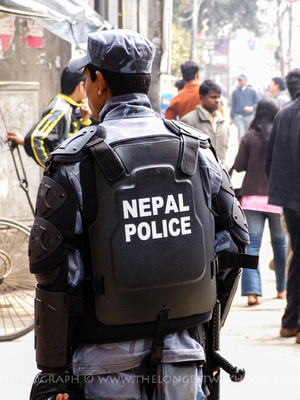 Quite often there will be demonstrations in public areas ranging from speeches to protests and sometimes they fall apart into full on riots. The may be a chance that tourist buses to Pokhara and Chitwan remain workings. Likewise a bus to the airport is often but not always provided as taxis will not be allowed to work.

Regional strikes and city strikes are very important for the tourist to understand. They only affect certain areas or cities. Meaning that if Kathmandu is having a regional strike then popular tourist destinations like Pokhara or Chitwan will not be affected.

The problem for the tourist is that if you are planning to travel from Pokhara to Kathmandu and there is a strike in Kathmandu you can certainly leave Pokhara but may not be able to get into Kathmandu. Thereby leaving you stranded. Vice verse is also true.

So as you can see a tourist needs to be aware of regional strikes if travelling between places.

Fuel strikes occur when there’s either a shortage of fuel coming into the country, a price hike or quite often a conflict at the border. Usually in the Terai region of Nepal. These types of strikes again mean no road transport.

For those wondering how often these bandas occur here's an app for bandas in Nepal (it's not that reliable though)..

Do keep in mind that many of the bandas listed are regional or local. But it should give you an idea at how real the situation is.

A banda or strike can be called at the last-minute. Usually the night before. These are usually only one days strikes.

Longer duration strikes are announced a few days or weeks before hand. But normally there’s not 100% confirmation until the night before.

You are still free to walk around outside, it's only public and private transport that are not allow to operate.

Do realize that strikes in Nepal are not just effecting you but also many everyday Nepalese people and their livelihoods.

What to do if you have a flight during a strike in Nepal?

International and domestic flights are rarely affected by strikes in Nepal. If you are flying somewhere from Nepal you have several choices. 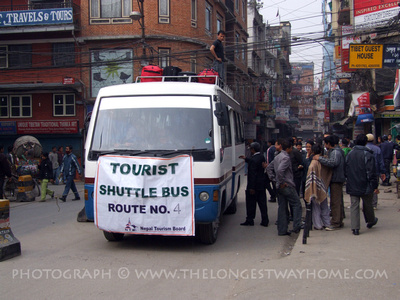 In Kathmandu there is a regular tourist bus leaving from outside Thamel by the Moroccan embassy to Kathmandu airport several times a day. Depending on the strike it’s usually free though at other times around 200 rupees. You will need to walk with your baggage to the bus. Though quite often cycle rickshaws are permitted to run during a banda. If you have a lot of luggage, get a cycle rickshaw.

Another choice of getting to any airport in Nepal during a Banda is during the hours of darkness. Generally speaking strikes end at 5pm and start at around 7am. If you have a flight leaving at 2pm and you want to take a taxi then you’ll need to leave before dawn. Ask your hotel to help you with this, or pre arrange with a taxi man. Such early bird taxis run at a premium cost though. Usually 2-4 times the normal cost of an airport run. Generally speaking the more affluent the hotel you are staying, the more the taxi will cost.

If you hear there’s going to be a strike the next day there are a few things you might do to make things better.

Things to do and not do during a Nepali strike

Read this article before going on holiday to Nepal. I’ve seen countless shocked and angry tourists due to having parts of their holidays ruined by a sudden Banda. 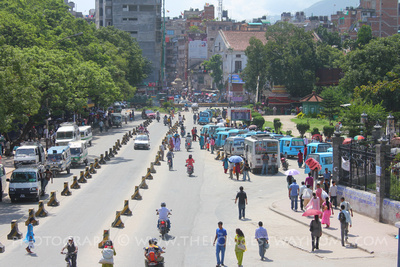 Hotel staff will be your key source of information during a strike, they have been dealing with them for years.

The last point needs to be highlighted in recent years. Do not take part in any demonstration in Nepal. Police have been instucted to arrest and charge any forigner involved in a demonstation. People have been arrested, charged and indeed deported. This includes showing up with a camera to take photos.

While a few years ago tourists were literally protected from violence, things have changed and during some bandas guesthouses with open doors or restaurants serving in outdoor areas that can be seen from the streets have been targeted with bottles and bricks. Don’t push your luck. Ask your hotel reception if it’s safe to go out before doing so. Do note that these particular incidents have only been caused by political youth groups. I've never had nor seen a problem from general protesters.

Finally do remember that bandas generally fizzle out after 5pm after which shops, restaurants and cafes open up for the evening as per normal.

Summary on how a tourist can be prepared for Nepal strikes

Looking for the best way to search for good hotel room prices in Nepal?

Check out my great hotel search to find the best priced hotels and look for ones that say they have a generator!

Search for Hotels with The Longest Way Home here

If you’re in Nepal during a time of year when there are electricity shortages don’t forget batteries, candles and a good book or two!

Do not let strikes in Nepal put you off visiting as a tourist!

This article is to make you aware of strikes in Nepal and how to handle them should they occur when you are visiting.

It is not meant to make you fear or think the whole country is impossible to travel around. It's very possible to travel Nepal and many tourists often visit the country and never see a strike. Indeed during peak tourist and trekking seasons there are generally fewer bandas.