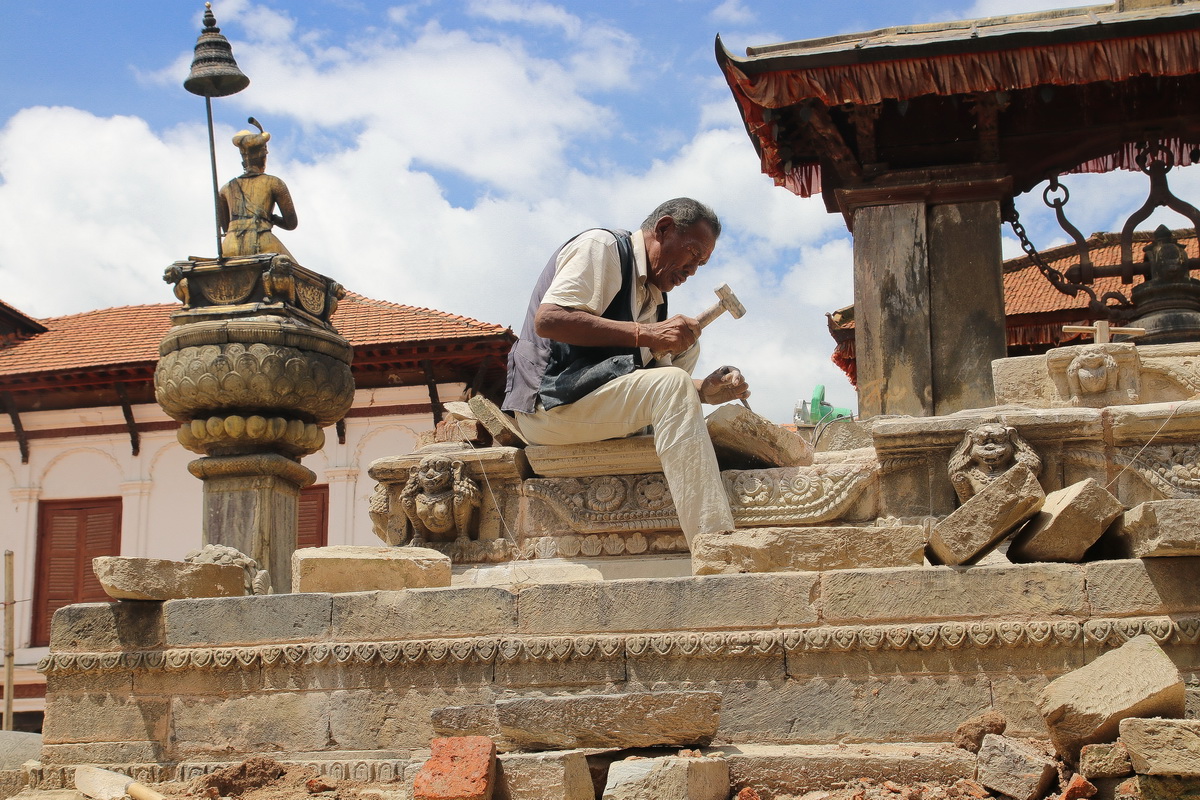 Bhaktapur is a prime case study in putting heritage right

When I asked officials in Bhaktapur whether they were going to put up the entrance fee of Bhaktapur, like Kathmandu or Patan have, they shook their heads and said “No we are not putting up the price”.

This alone, in Nepal, is a stunning revelation. Why? I asked.

“Because we are currently reconstructing the old temples and don’t want to charge tourists during this time. We will probably raise the ticket price, but only when reconstruction is finished.”

Yes, this is a great answer. It’s also a virtually unheard of one in Nepal. This is a heritage site using its own funds to get on with reconstruction and thinking of what tourists like by not increasing the price during this phase.

This way of thought and way of doing things really needs to be applauded!

Just like the post last week about the reconstruction of Nepals durbar squares, I throughly support this way of reconstructing heritage in Nepal. Well done to the Bhaktapur officials who bucked the trend and are putting heritage, the community and tourists first.

It gets better though. You can now donate directly to the reconstruction of a temple in Bhaktapur!

Donate directly to the reconstruction of Vatsala Durga

It takes a lot to “move” me. Bhaktapur Durbar Square has already reconstructed five temples in 2017. That’s a great accomplishment. But there was more to come.

When the great guys at the Bhaktapur ticket office showed me that it was now possible to donate directly to the reconstruction of the Vatsala Durga Temple in Durbar Square I was shocked.

It was truly wonderful to see that people could donate directly to the reconstruction of this single temple. What’s more, they’ve done it right.

To donate you just ask the ticket office. They will then get an official reconstruction officer who will bring an official receipt book. Your exact donation amount is recorded along with your name and you of course get to keep the receipt. Further to this, if you want, your name can also go on public display along with the amount you donated.

It’s all open and transparent.

In case you are wondering why I am making such a big deal about this. It is because I have never come across this before in Nepal. It needs to be applauded for that alone.

Asides, Vatsala Durbar was/is my favorite temple and I brought about the suggestion of adopting a temple back in 2015 after the earthquake. It is fantastic to see all this happening in Nepal.

Even if it’s just one place. If the idea catches on then just think of how open and transparent donations can actually be for a change while also reaching the right people and places.

It will take two years to fully restore the Vatsala Durga temple in Bhaktapur. Ram Shrestha from the heritage department explained that the stone buildings took longer due to the workmanship involved compared to brick or wooden temples.

Two years is along time. But when you watch the men and women at work on the temple you can see the handwork involved. It’s being rebuilt traditionally by hand. There’s no concrete. It’s lime and sand going between those huge stones.

It’s incredible to see genuine stone masons chipping away at the old blocks. Mortar is being mixed right there and old stone fragments are being used in the steps leading to the base level of the temple.

Being a part of this temples restoration

I was allowed to place some stone onto the temple myself. It’s an epic feeling to be a part of this great temples reconstruction even if it was largely symbolic. I’m quite sure the workers there were wondering why I was so taken back.

History is being rebuilt before you what’s more you can actually see, hear and feel where your money is going. It’s  where the Digital Archeology Foundation concept came to fruition. It’s also where the idea of adopting a temple first came about and is now a possibility. It’s always been a favorite temple of mine.

It’s the first project of its kind in Nepal and such an epic difference compared to other reconstruction sites in Nepal.

As I stood atop the temple a man instrumental in this project appeared.

I first met Ram Shrestha from the Bhaktapur Heritage department back in 2015 when we first discussed how reconstruction was going to go. I’ve met him every year since.

Ram is another man who has spent so much time and effort in overseeing that Bhaktapurs temples are reconstructed the right way. I’ve witnessed Ram up high ladders, carrying mortar and doing so much to make all this happen.

Donating money to restore heritage in Nepal was never so hard

Back when the earthquake of 2015 struck Nepal I really thought the centuries old temples and monuments would be a priority in terms of restoration. They were in theory. But it never happened. You can read more about the temples destroyed in the 2015 earthquake here and what’s happen to reconstruct these temples since then.

I thought some of the $4.3 billion USD in aid would be used to help reconstruct the ancient heritage and culture. However, as the months rolled on the grim reality of no transparency became all too real.

I spoke with people in heritage and nobody knew anything. There’s was silence in regards to restoring damaged heritage buildings throughout Nepal.

People contacted me and wanted to know how they could help reconstruct these old buildings. Everyone I got in touch with in Nepal just shook their heads. They were waiting for the “leaders” to tell them. But nobody ever did.

It seemed even if you wanted to help, you couldn’t.

What the Nepali people were doing on the ground

As much as it was shocking, with no help at a national level, Nepali people forgot them and got on with the job of building their own houses, homes and lives again.

From a humanitarian standpoint this was a horrendous turn of events. One that still has repercussions throughout the country as 80% of people effected still remain in temporary shelters.

It became obvious that if this was the humanitarian side of things, what hope for heritage?

Suddenly money, from nowhere, seemed to be building fancy new hotels faster than any persons house let alone a temple.

Again, back in 2015 people contacted me asking how they could directly donate to help reconstruct some of Nepal’s old temples.

It was at this stage I suggested that tourists or people overseas could donate directly to a specific building or monument. “Adopt a temple” is the term I used.

After contacting several heritage departments and the Kathmandu Preservation Trust nobody was interested in a “small” donation it seemed. They were waiting for the big donors to arrive.

When one of these organizations then put up a donate button that then disappeared with the total donations acquired it became woefully distressing.

I stood in front of my favorite looking temple in all Nepal. The Vatsala Durga Temple in Bhaktapur Durbar Square and wondered if it would ever be restored.

If you look back here, you’ll know this part of the reason why I started the Digital Archeology Foundation, the first of it’s kind in Nepal and the first to fully replicate and reconstruct Nepali heritage monuments in 3D.

Todays heritage reconstruction efforts are a shocking indication of the future

A few weeks ago I wrote and showed photographs of the reconstruction progress work in Nepal’s three main Durbar Squares.

The results of all three were polarizing:

If you are visiting Bhaktapur, do take a look at the Vatsala Durga Temples reconstruction

You can’t miss it. The Vatsala Durbar Temple sits at the end of Durbar Square. In the outdated tourism promotional posters Nepal still uses one can see it in all its former glory.

In reality it’s completely destroyed. But don’t let that put you off visiting. Now, when visiting, it’s like watching history being rebuilt with bare hands. There are very few places in the world you can watch such traditional reconstruction taking place.

What’s more, right beside the temple is a list of individual people who donated to this building. A truly transparent and great way to restore heritage. It’s also a chance for you to be a part of history and the restoration of this wonderful monument.

Again, well done to the excellent people of Bhaktapur. You truly are to be congratulated!