The Kedareshwar Mahadev Mani temple is a relatively new temple dedicated to the Hindu god Shiva who is also known as "Kedareshwar". Located in Pokhara-Komagane friendship park it's an easy walk to reach. Though you will have to walk to the back of the park to locate it.

There are several small shrines and temples around Pokhara. However the region lacks the impressive temple structures that surround the Kathmandu Valley. There's a historic and geo-political reason for that. The Malla's Kingdom and the Newari people were mainly localed in the Kathmandu Valley. Only trading routes passed through Pokhara and even at that it was miniimal.

Friendship park in Pokhara is name so as it's dedicated to Pokhara's sister city in Japan called Komagane.

As you enter the Kedareshwar Mahadev Mani temple you'll see a courtyard surrounded by a few shrines and the main temple itself. They are all built in typical Newari design with red bricks. 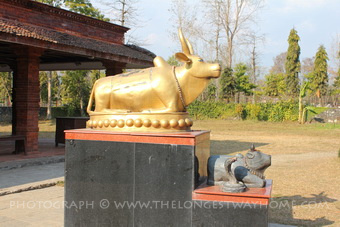 The main temple is dedicated to the Hindu god Shiva. To the right, as you enter the compound, you'll see Shiva's mount Nandi, the bull, sitting in front of the temple. Opposite Nandi enclosed within the temple is statue of Shiva.

The other smaller shrines have similar statues and you may find a Sadhu (holyman) or a priest going between them. Behind the temple and the shrines is an older concrete temple dedicated to Ganesh.

The Kedareshwar Mahadev Mani temple is at the rear of Friendship Park located in south Lakeside. It's beside Basandhara park en route to Damside.

There is no entry fee into the Kedareshwar Mahadev Mani temple or Friendship park. Although there are no current reports of touts asking for fees at the gate do be aware of people offering to show you around for a fee.

There is also a rather annoying shoe removal rule for the entire site rather than the temple itself. This includes a caretaker who sometimes notices and other times is "resting" somewhere.

Are there more temples Pokhara?

Yes, do read about the Newari temples in Pokhara. Other temples are listed in the Pokhara section of my Nepal guidebook.