Your guide to Thahiti Chowk

On the border between Thamel, Jyatha and just inside what used to be the old walled city lies Thahiti Chowk (Thahity). The square itself dates back to the 15th century according to documents describing the central stupa.

The stupa is accessible through a small garden park. Surrounding the garden park along its fence numerous vendors occupy the pavement. Among them is a local vegetable market.

On the northern side of the chowk opposite the stupa is the Nateshwar temple. (Natadreeswarar) dedicated to Nate an incarnation of Shiva.

There's not much else to see or do in Thahiti Chowk however it is the first part of the main Kathmandu heritage walk started by this website and is rarely visited by tourists. There are several streets leading off the chowk that start other heritage walks in my Kathmandu city and Kathmandu Valley guidebooks.

There are five intersection leading to Thahiti Chowk, one from Thamel and the rest leading to the old walled in city of Kathmandu.

Thahiti Chowk dates back to the 15th century stupa which is located at its center. The "Thahiti Stupa" is said to have been built by a Tibetan trader who used to live there.

There was a hiti (natural water source with a tap built on it) that the trader discovered produced gold coins. Fearing someone would steal the water spout the trader built this stupa over it to hide the hiti.

The Nateshwar temple opposite the stupa was built much later in the 18th century, The ornate doors are usually close but when they are open you can see three very faded stone statues inside.

In the 15th century a Tibetan trader built this stupa to hide a hiti (water source and spout) underneath. The man was not just trying to hide the hiti but hide the spout that dispensed gold to the virtuous. Upon learning of a plot to steal the hiti spout, he covered it up and built a stupa above to protect it.

Today the stupa is well preserved. Protected from the traffic and people by a fence that runs around a garden area surrounding the stupa. There's a small gate on the southern side of the fence which is sometimes open very early in the morning.

On the north-west corner is shrine to Ganesh mounted on the fence that's worth a loot as it's quite detailed. Surrounding the fence will be an early morning vegetable market that often stays on until the afternoon. 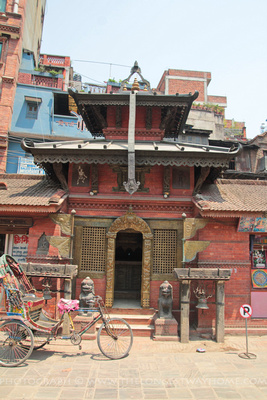 It's dedicated to the god Nate who is an incarnation of Shiva. Interestingly it is one of the few temples in this area to have a patanka come down from the roof.

The doors into the temple are highly decorated and usually closed in the afternoons. Beside the gate are two stone lions and two taleju bells. Above the gate is an elaborate toran and on either side depictions of dancing skeletons.

Just outside the temple the main road usually has several rickshaws and a few touts or travel guides looking to make a quick buck. It's best to politely ignore them in this area of Kathmandu.

Most people pass through Thahiti Chowk without giving it much time on the way to Basantapur (Kathmandu Durbar Square). While the square itself only has two historic buildings there is a small vegetable market here during the day. In the evening the area is popular with tea sellers and street food vendors.

On this heritage walk Thahiti Chowk leads to:

There is no fee to enter Thahiti Chowk or any of the surrounding temples.

Do be aware of some "tour guides" in this area. Many are simply trying to earn some money be taking you to Kathmandu Durbar Square. There is no formal training on heritage walks in Nepal. Hire them at your own risk!