About the Balkumari Temple

A Newari pagoda style temple located about 800m east of Patan Durbar Square lies the mysterious Balkumari temple. Dedicated to the Kumari Goddess it was built in the 17th century though some say it dates back to the 7th century.

It's a bit of a walk to get there but if you have an interest in the Kumari, deity statues or have your own transport it's worth seeking out.

While many people may know of the Kumari Living Goddess few know about the mysterious Balkumari goddess herself who is a different entity.

This temple is a must see for all historians and culture lovers due to its uniqueness in the Kathmandu Valley and the fact that there are only 3 Balkumari images remaining.

The three roofed temple is set in a sunken courtyard with four entry points. Each entry point is guarded by stone lions.

The main entrance displays the gilded Balkumari image of her riding a peacock. While at the rear entrance to the temple is her consort Bhairab.

It is said that the original Balkumari statue was made of stone. Why she rides a peacock is just one of the many mysteries about her. 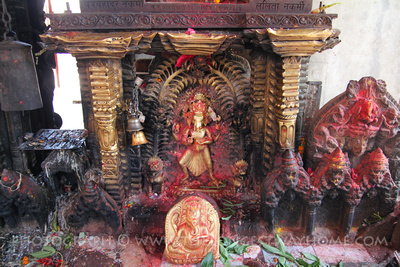 Bal means girl. Why is she married? Why is she riding a peacock? The latter seems to be a more moderner interpretation of the goddess.

Inside the ancient temple are her companions Ganesh, Bhairab, Dakshin Kali and Mahalaxmi.

Some facts about the Balkumari

The original Balkumari image was stolen and never recovered. This intricate copy has also been stolen on several occasions, but eventually returned. On one occasion a man was stopped at Kathmandu Airport when the box became too heavy for him to lift. A passerby noticed the image and altered the authorities.

On another occasion it was stolen for over a year. When the thieves tried to sell it they disagreed and the authorities found out about its location in a house under the floor.

On yet another occasion the thief was blown from the roof, fell to the ground and broke his leg. He was then tied to a pole and beaten as punishment.

Today the Balkumari temple and its artifacts have been digitally preserved by the Digital Archeology Foundation. This is an effort to conserve the little known but culturally important temple.

There is another Balkumari temple found in Thimi and a smaller shrine found in Patan. Both of these buildings can be found in my Kathmandu Valley Heritage Walks book.

There is no entrance fee to enter the Balkumari Temple.

Map & Directions to the Balkumari temple in Patan


The Balkumari is located close to ring road to the east of Patan city. While you could walk, taking a short 100 rupee taxi will save you time.