Your guide to the Rudra Varna Mahavihar

The area around Rudra Varna Mahavihar contains 3 courtyards and each has interesting and unique features. The highlight is of course the main Uku Bahal central courtyard which was started by King Shivadev (590-604) as one of five monasteries.

The outer courtyard is marked by an impressive gate with two flag bearing lion statues on top that wouldn't look out of place in London. These were a later addition in 1680.

The courtyard at the back of Rudra Varna Mahavihar is relatively modern and actually belongs to the residents surrounding it. None the less it's worth taking a walk around it and possibly admitting some of the painted sculptures and stupa there.

Take note of the small ticket price for the temple below as it also covers the nearby Mahaboudha Temple.

When it was founded the monastery was located in the Wankulli district. So it's name become commonly known as Wankuli Bihar. Over the years this changed to Uku Bahal!

Not only is the Rudra Varna Mahavihar courtyard one of the most well preserved courtyards in Nepal it's also one of the impressive. You usually have most of the place to yourself as day trippers don't often spend much time here on their tour. So, the moral of the story is visit independently if you like this type of heriage (my guidebook also goes into detail). 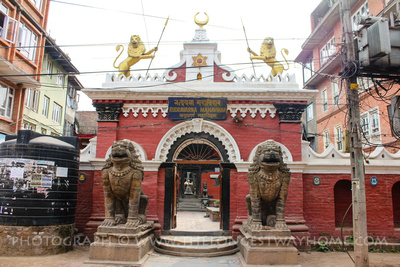 Take note of the well preserved roof struts along the northern side of Rudra Varna Mahavihar. They are said to be some of oldest in the valley. Much of the color paint is still visible on them and is likely to match the original paintwork.

Splendid items found inside include dorjes (thunderbolts), brass bells, winged horses, peacocks, a statue of Rana Prime Minister Juddha Shumsher who donated money for the repairs to the Bahal after the earthquake in 1934.

Also of note are the pair of stone lions which are highly unusual in Nepal and look distinctly British. There are also a pair of ornate Garudas who don't seem to be rivaled elsewhere in the country.

The current fee for foreigners is 50 rupees. This ticket is also valid for the nearby Mahaboudha Temple. So you only need to buy one ticket at either compound

Use this map of Patan for to locate Rudra Varna Mahavihar (Uku Bahal) and other highlights in Patan. For a better map download my full travel guide to Patan

Rudra Varna Mahavihar (Uku Bahal) is located at the end of a main street in south Patan.

As you come out of the Mahaboudha temple compound take a right then the first street to your left. Uku Bahal will be the first on your right marked by its impressive gateway and black stone lions. See my guide below for detailed directions.