During this period the Nepal government had legalized hashish in Nepal making it a nirvana of sorts for those seeking it. There were even direct buses from the airport to Freak street that bypassed popular places like Thamel and Durbar Square just to aid hippies in getting to the famous area.

In recent years Freak street has been making a bit of comeback as first reported here on this website. New restaurants are opening up and there's a small "classic" revival for yesteryear taking place in Freak street which connects directly with Kathmandu Durbar Square. However, due to the COVID-19 pandemic, these new businesses took a hit. Many are now catering to locals now, or closed. Due read menus carefully before settling on a place.

If you are visiting Kathmandu Durbar Square it's certainly worth taking the short walk along Freak street where there are still some old classic souvenir stores and cafes intermingled with new vibrant restaurants. There's also an eclectic selection of budget accommodation on Freak street.

Freak Street is the nickname given to Jhochhen Tole in the 1960s due to the "eccentric" characters that used to stay there. Jhochhen has several pronouciations - the most common is "Joe-Se" by non-Newari whereas Newari will often pronoucen Jhochhen as "Jos-Se".

In the 1960s marijuana was legal in Nepal and hippies on the famous hippie trail had made Freak Street their home. Pie and chai stores became popular hashish zones. Tourism was boosted and Nepal had a very popular chill vibe to it. 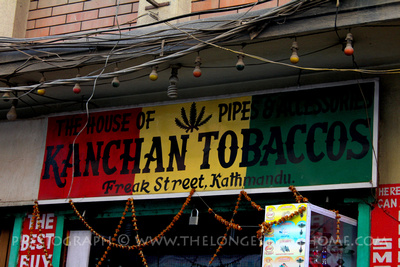 Then in the 1970s under pressure from the USA government Nepal banned hashish and even ordered a proper dress code for tourists. During this period hippies were even rounded up and deported to India.

A new tourism focus was put on trekking in Nepal and the vast majority of tourists stayed in the more trekking conscious neighborhood of Thamel.

Under such pressure the hippie culture flowed out of Nepal into India and Freak Street was left with little more than empty cafes and stores.

Even though Freak street borders the ever popular attraction of Kathmandu Durbar Square it never took off again as a tourist friendly area until around 2015 when a few new restaurants appeared.

Mulled by Thamel's increasing cost of living, budget tourists and backpackers are moving to Paknajol and those seeking to be around less tourists are coming back to Freak Street.

At the moment there's a push to forget the nickname "Freak Street" for the original name of "Jhochhen Tole". However as tourism trends ebb and flow the attraction of a bygone era may once again bring credit and popularity to the name Freak Street.

What to do in Freak Street today

There's a mix of old meets new in Freak Street today. While it lacks big temples or mountain views it does offer a different vibe to Kathmandu.

It's a very short street that won't take more than ten minutes to walk up and down. However many of the side streets branch out into parts of the older city which make for excellent heritage walks. Do read my book Kathmandu Valley Heritage Walks.

To many it may seem Jhochhen is "boring". But to others who know where to look it's like looking back in time. It's worth having a look at taking a walk down modern day Freak Street.

Freak Street gives better options to those visiting Kathmandu Durbar Square and are looking for a place to eat or have a coffee without all the noise and bustle.

For culture lovers there are only a couple of Buddhist chaitya and one Bhairab shrine along the streets. But there's also the old Eden Hash House (newly renovated as Eden Hotel) which was once the most famous "cafe" in Kathmandu. There's also the Snowman Cafe which hasn't changed much at all and is indeed like stepping into another era. 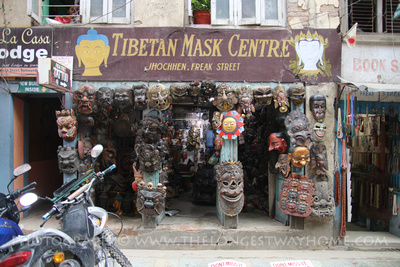 Budget accommodation is available throughout Freak street but there is no mid or upper range of hotels. It's a backpackers paradise if you are the type who wants to stay away from the bustle of Thamel and preferred more laid back lifestyle.

The Tibetan mask center offers one of the best old and new wood carved masks in all Nepal. The old second hand bookstore is the last of its kind here. While hooka pipes are meant to be illegal there's still a store selling "colored pipes".

There's a wonderful old carpet/embroidery shop halfway along Freak Street well worth visiting. It's an experience!

New trendy coffee shops are opening up every 3 months along with nice little budget cafes to sit and chill at for the day.

There's also a hidden heritage walk I write about in my guidebooks to Nepal which highlights this incredible blend of old eras mixing with the new.

It's all budget and old school accommodation along Street and the little alleys that veer off from it. Very few accept bookings from online. Yes, it's that old school!

Freak Street's Restaurant scene has been on the rise over the past few years. Trendy new cafes and coffee shops are opening up on the small lanes off Jhhonchen. A few restaurants have had renovations and others are opening up in what may soon be the new hip area of Kathmandu. 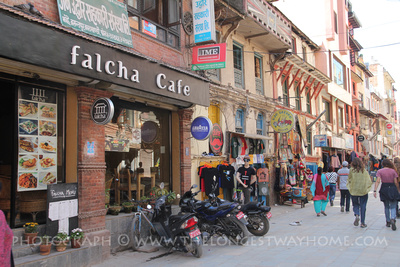 Where is Freak Street!

Freak Street is shown as Jhochhen on many maps. Technically, according to the hippie era, it encompassed the whole area and not just one street!

The street referred to as Freak street is found at one of the entry/exit streets to the south of Kathmandu Durbar Square. Many maps mistake it for a small side street. It is the main road heading south. See the map below for more details.

For a much more detailed map with more hotels, restaurant locations and reviews along with a heritage walk see my Nepal or Kathmandu guidebooks below.

They are available in print or digital editions and are without doubt, the best guidebooks you can own for visiting Nepal.