Your complete guide to Gokarna

Gokarna is only 10 kilometers from Kathmandu city, past Boudhanath, in the northern area of the Kathmandu Valley. Set in a quiet forested area whose main attraction is the impressive Gokarna Mahadev temple compound.

Set beside a somewhat cleaner portion of the Bagmati river the temple compound was not aﬀected by the 2015 earthquake. It’s surrounded by a vast collection of stone statues, funeral ghat and some unique shrines not found elsewhere in Nepal

Gokarna is easy to reach if you avoid the mid-morning and afternoon traffic jams of Kathmandu. For hill-walkers there’s plenty to enjoy in the surrounding protected area. For culture lovers Gokarna is one of the lesser known places you can easily add to your itinerary.


Gokarna makes for an excellent little half day independent trip from Kathmandu city. Hire a car/taxi or take a local bus with ease.

There are several "tour operators" who offer trips to Gokarna. Unless you like tours, they are not necessary and quite expensive.

My guidebook to Nepal contains extensive heritage information and walk through to Gokarna at a fraction of the cost.

There are several transportation methods to Gokarna depending on your budget and schedule.

Buses run from Ratna bus park every 30 or so minutes and are the most budget friendly ways to Gokarna (25 rupees). However, in 2022 these buses depart from the road outside the bus terminal which is still under constuction. Taxi's can be hard to find in Gokarna. Book a two-way trip between 1600- to 2000 rupees with a waiting time from Kathmandu.

Alternatively you could hire a taxi there and take a bus back.

Do read my free online guide on getting to Gokarna for full details.

Things to see & do in Gokarna

Nearly all trips to Gokarna start from just outside the main Gokarna Mahadev temple complex. The bus from Kathmandu will drop you off here so long as you ask. Alternatively the bus stops at a terminal around the corner from the temple. Just take a left from the bus stop and follow the road back to the temple if you get off a the bus stop.

If the bus or taxi drops you outside the temple complex then there are two entrances to choose from. The most popular is the main entrance entered at the bottom of the hill to the right. There's a large open area there and then a small gate just in front of the temple. The building to your left here before the gate is the ticket office (you might have to call out to bring the attendant out.

The second entrance is just before the main entrance to the right near the store where people wait for a bus back to Kathmandu. There are a series of steps leading down to the temple complex. At the bottom to the right is a building which usually has someone who issues tickets.

The Gokarna temple complex is relatively small but is one of the most feature filled complexes in all Nepal.

tatues and sculptures that outnumber many other places in the country.

In front of the temple are the ghats which you can walk along up to the suspension bridge. It's worth crossing over to the mid point of the bridge to get a great look at the temple area. To the left are several other fascinating shrines which we'll also take a look at below.

It's customary to walk clockwise around the temple. Though walking back and forth is fine when looking at the statues and shrines.

The tall three-roof temple was built in its current form in 1582. It is said the actual temple dates back further due to the areas royal history throughout the ages. The temple is dedicated to Shiva in Mahadev form (Shiva’s “great god” form).

Along the front of the temple there is an impressive golden door and even more wonderful torana above it. The torana depicts Shiva and his consort Parvati at the center in the Uma Maheshwar position (Parvati on Shiva’s knee leaning on him). Above them is Garuda. Behind the door is the inner sanctum which is usually locked and contains a revered Shiva lingam.

Surrounding the Gokarna temple are dozens of Hindu and Nepali statues. The large statues with circular bases have depictions of Hindu gods that are not found elsewhere.

To the side near the main entrance is a statue depicting Shashthi, next to it on the right is Durga, then Mahagauri (Durga), then one more of Durga the mother goddess again. 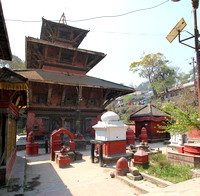 Finally we come back to Shiva’s trident. At the front of the temple past the golden door is Ganesh, then a lone Hanuman followed up by a unique statue of Krishna with a Gopi (one of his maiden followers).

On the far side of the temple near the steps you'll find a rare statue of Indra on an elephant.

To the rear there is a Nandi statue which in itself is unusually placed as it's normally located to the front of a Shiva temple.

In the rear side corner is a small shrine to Shiva's wife Parvati. The shrine is usually open and there's a statue of Parvati inside dressed in a sari like dress.

To the front of the temple and down the steps by the river you'll come across an unusual stone statue of Narayan lying on a bed of snakes.

To the left is a temple like building which is dedicated to and Vishnu known as Vishnu Paduka. Inside there’s a statue to Vishnu along with a set of his foot prints.

Walk around the Vishnu temple to a series of shrines and you'll quickly come across one of the best tree shrines in all Nepal. Most likely this small Shiva shrine looked like the others beside it until a seed landed and this large trees vast root system took hold. Inside the shrine is a small stone Shiva lingam.

The Bagmati river opens up in front of you as stone steps lead down the ghats. As you walk towards the bridge you’ll pass the old ghats where cremations still take place today. Up ahead and closer to the bridge are more modern ghats. Do be aware that cremations take place and taking photos of them is not appropriate. From the top of the bridge you should get a great view looking back at the temple an

If you are after a round of gold at a premier location then the Gokarna Forest Resort Golf Range should be a familiar name to you. Designed by same people who created Gleneagles in Scotland it’s a premier course. Costs range from 5,000/7,000 rupees for 18 holes during weekdays and weekends. Equipment rental starts at 2,000 rupees.

There is no entrance fee to visit Gokarna. However to enter the Gokarna temple complex there's a 100 rupee ticket. Get the ticket from either main entrance or the one near the bottom of the near the main road steps.

Full directions to Gokarna, maps and diagrams of the temple complex are available in my guidebook below.

Restaurants are virtually non- existent in Gokarna in terms of tourist meals. There are a few local cafes serving food near the bus stop at the top of the steps leading to the temple complex. It's best to stick with basics here like noodles.

There is very little accommodation available in Gokarna. The area is close enough to Boudhanath and Kathmandu to avoid having to stay there overnight.

Those on a budget wanting to stay in the area might want to look at Tranquil Home stay: With 6 clean rooms & very welcoming hosts it provides very peaceful stay. Located near Shiksyalaya School and Nepal Engineering College. Tranquil Homestay pricing and bookings can be made here.

Liked this page? You'll love my book! It's a guidebook that's better than the rest. Yes, really! In it I cover all attractions with well researched information, photographs, itineraries, reviews, accommodation, restaurants, and travel tested walking tours.