Located close to Gupteshwor Mahadev Cave on the other side of the World Peace Stupa, Davis Falls is a small waterfall that runs though the aforementioned cave.

The waterfall has a length of 500 meters and depth of 100 feet. Though the waterfall flows all year round it is best viewed from June to September. An interesting note about the waterfall is that it runs down some rocks before disappearing into an underground tunnel leading to Gupteshwor Mahadev Cave.

The waterfalls modern name is constantly debated. It's official name is Patale Chhango. However it's most popularly known as Davis Falls or Devis Falls due to a typographical mistake. More on this below.

If you've been trekking or seen other waterfalls then Devis Falls is nothing so special from above. From Gupteshwor Mahadev Cave below it's more interesting. The waterfalls name is perhaps what attracts most people.

How Devis Falls got its name

The original name for the waterfall is Patale Chhango which means "underground waterfall". On July 31st 1961 a Swiss husband and wife were swimming just up from the waterfalls. The woman, Mrs Davis, was pulled by the current and fell to her death down the waterfall though some accounts say she drowned in an overflow tank.. 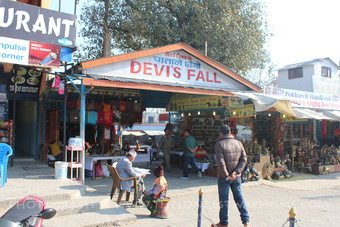 Her body was found after a large effort three days later in the river Phusre. The father of the woman is rumored to have asked that the waterfall be named Davis Falls though there is little so substanitate this. However, in either case, due to Nepali spelling and pronunciation her name often translates to Devis. Dev and Davi are common name's in Nepal. Similar also to the name of the Buddha's mother, Maya Devi.

Indeed on the street gate leading to the waterfalls is a sign saying "Devis Falls" and a lot of maps also say "Devis Falls." There are also some rumors saying it was her husband and not her that died that day. However all evidence suggests it was a woman with the surname Davis.

In Nepal Devi is also a goddess and indeed Maya Devi was also the name of the Buddha's mother. As such, it's become the more popluar "pronouceation" and indeed name of the waterfalls.

As you travel Nepal you'll no doubt come across a lot of duel names for sites and places. Nepali, Newari, Hindi, Sanskrit and English have all been prominent in Nepal's language in the past.

Is Devis Falls worth visiting?

If you've seen waterfalls before then you will be disappointed in Devis Falls. They are small even during monsoon season. The only unusual thing about them is that they descend into a tunnel that leads in to Gupteshwor Mahadev Cave.

For most tourists the best way to make the waterfall visit worthwhile is to combine it with the World Stupa Hike after which you walk to Gupteshwor Mahadev Cave then visit a Tibetan settlement (Tashi Ling), before making your way over to Devis Falls.

Do be aware of overzealous guides and proud locals who talk endlessly about Devis Falls as if it was the best thing in the area. Again, if you've seen a waterfall before then to be frank it's nothing so special.

Do see my guidebook for detailed itineraries, maps and more information.

Directions to the Devis Falls

Devis Falls is located along the Siddhartha Highway. It's reachable from Damside in Pokhara. The cave is across the road from Gupteshwor Mahadev Cave. Many people reach the waterfalls via the World Peace Stupa trek from Lakeside as part of a day or morning trip.

There is now a "Robotic Buddha Museum" opposite the falls. The price is a bit steep but it's something "different" to do in the area!

The ticket price for Davis Falls is 100 rupees for non-Nepali.