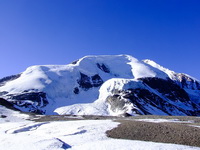 The past 24 hours has had tragic news coming out of Nepal. 20 30 39 trekkers have so far been reported dead in an unexpected blizzard that hit the popular Annapurna mountain range on Tuesday.

I’ve been in constant with people I know in the area and am very thankful they are safe.

I want to give some reassurance and information to other people who know of friends, family and loved ones who may be in the area.

What happened in on the trek?

A blizzard with high snow fall and strong winds hit an area just below and around the Thorong La Pass (5,416m) on Tuesday. This is the steep decline that leads to Muktinath (3,719m) once you’ve crossed over the high point of Thorong La Pass. It’s an exposed area that’s usually crossed in the very early morning.

There has never been an event like this on the popular Annapurna Circuit before. It is now peak trekking season in Nepal with anywhere between 150-300 people per day crossing over the pass.

Other areas affected by blizzards and avalanches

Reports also state of a blizzard and possible avalanche killing trekkers and locals in the Mustang (Dump camp) region near the border with Tibet. Another trekker is reported to have died after falling into the Budhi Gandaki river.

I’ve had some people asking about Kathmandu, Pokhara and other areas. Please note Kathmandu and Pokhara are unaffected by the blizzard.

Today started hazy but the weather is brightening up and rescue attempts are ongoing in the mountains.

What caused the blizzards

Cyclone Hud Hud which hit the East of India over the past week has brought an unprecedented amount of rain and snow to Nepal over the past few days. There’s more information on what happened with the weather front here (source:ekantipur).

What can people do if they have family, friends or loved ones on the Annapurna trek?

From home: Contact your Foreign Office or Department of Foreign Affairs for information. There is already information coming from some embassies and they will have the latest confirmed information.

Trekking agencies: If you know the name of the trekking agency people went with then contact them. They will have contact with their guides en-route. Here is a list of registered trekking agencies from the TAAN website. TAAN also have a live update page and a TAAN FaceBook page providing updates.

Share information: There is a FaceBook information and sharing page open here. You can give and share information with others (there is a lot of up to date information on that page). Do share any information about people, including names and dates of the trek, on this page. They have also opened a blog post listing names of known trekkers in the area.

Check dates: Try to work out when the people you know started the trek. The average times people take to trek the full circuit is between 17-21 days. There are usually two days acclimatization at Manang. Trekkers on average reach either low or high camp on either the 8/9/10 day before crossing over Thorong La Pass.

Lodge telephone numbers: These are phone numbers of lodges and possible helpful contacts in the affected area:

Thanks to Satesh Gurung for the numbers. Please be aware that telephone lines are probably very busy up there at the moment and connectivity is not that great to begin with.

Patience: Do understand that both mobile and land communication lines on the Annapurna Circuit are not the best. Though there is mobile reception the signals don’t always work. Batteries do not hold charge in the cold of the mountains for long. Electricity shortages and availability mean charging devices is often difficult. People often simply turn off or don’t take phones with them on treks.

I’ll update this page as information becomes clearer over the next few days.

I do know that up to 36 people are at high camp now and are safe. I do not know their nationalities or names.

No more people will be crossing Thorong La Pass until the rescue operation is over and the weather settles. All trekkers on the Annapurna Circuit will be turning back and there are already reports of trekkers arriving safely back at Besishahar (start of the trek).

Rescue operations are ongoing at the moment involving both the Nepalese Army and Police. Helicopters are evacuating people.

There’s a lot of unconfirmed information circulating online and on the ground in Nepal regarding a much higher number of fatalities. I’m not getting involved in this speculation. There are rescue teams out there now. It’s better to get official confirmation from them on numbers.

For now the best advice I can give, for those seeking more information, is what I’ve listed above. Further information will slowly start to trickle out over the coming 2-3 days.

We can only hope that as many people as possible were not crossing Thorong La and have survived this terrible and tragic event.

Update: Some good news so far in that there are many people coming down from the trek safely. Over 100 have been rescued near Thorong La. The weather has returned to normal and rescue teams are still working in the area.

There will be many news reports in the coming days about prevention and blame. Personally, through this tragedy, I am finding a lot of goodness in reading about people helping each other, surviving and contacting worried families.

I’ll update again in a few days when all the rescue operation is over. For now, trekking permits for the Annapurna Circuit will not be issued for up to one week.

A large portion of the Annapurna circuit is still closed and trekkers are being urged not to attempt to trek all the way to High Camp or Throng La pass as it’s hampering rescue efforts. There is still a considerable amount of snow in the area which has not yet melted away.

Trekking permits are available but guard stations have been set up to prevent trekkers from going to far around the circuit.

It has become clear that many trekkers were not prepared for such a disaster or harsh weather conditions. Stricter training is being proposed for guides to ensure their clients are better equipped in the future.

Many are calling for better shelters to be built in the exposed areas that were hit by the blizzard.

Questions have been raised about a better warning systems for reporting weather conditions along the trekking routes.

Unless something dramatic arises I’ll update this page again in a few weeks once the rescue missions are over and conclusive final reports are made.

Personal notes given the above: It’s always been my opinion that first time trekkers have a guide. Not only for safety but also to maximise the enjoyment of the trek. Good guides bring knowledge of the mountains and surroundings that can make a once in a lifetime trek even better.

I still strongly disagree with TAAN’s proposal to curb independent trekking in Nepal. And condone them for making such rash statements during such a disaster before any statistics have been fully compiled.

This fatal blizzard was a rare event. Yes, Thorong La Pass can be very cold. I’ve completed it in the middle of winter at -23 not including wind chill which brought it up to -40. It’s at an elevation of 5,416m. It’s not as easy as many people think it is.

However in peak trekking season the conditions are nearly always good. During the days it’s often hot enough to wear shorts and t-shirts. What happened this October was a freak event that’s never happened before. Once has to ration this into the equation before jumping to conclusions. At the end of the day the Annapurna Circuit has gives thousands of people every year a once in a life time trekking experience without incident.

I do agree that better weather communication is needed on all treks. The cause of this blizzard was cyclone Hudhud in India. If emergency halt calls had been made to lodges and guides along the way to stop and shelter we most certainly would not have had such a disaster.

It’s with great hope that I look forward to learning about such early warning procedures in the future.

Meanwhile for first time trekkers thinking about going trekking in Nepal I do urge you to forgo thriftiness and hire a full qualified guide. Do read my article on how to hire a guide in Nepal for more.

28 Replies to “Blizzard Kills Trekkers on the Annapurna Trek in Nepal: updated”