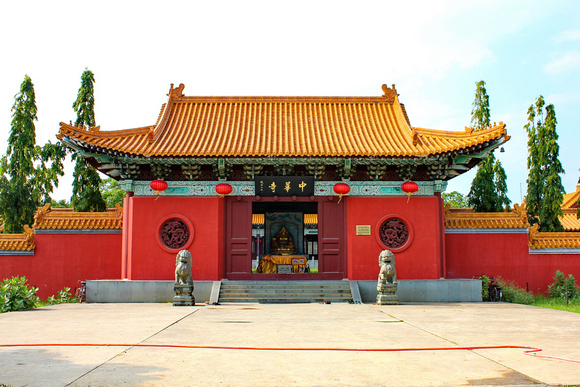 Lumbini’s Buddhist temples from around the world

I must firstly admit I am not a huge fan of endless Buddhist temples. From Nepal, to Tibet, China and Thailand I’ve had my fill of the “Buddhist lifestyle.”  Expensively ornate temples, cars, gadgets, hidden monk romances and the appearance of more than several monk offspring tends to make one a little less at peace with the lifestyle. It wouldn’t be so bad only most of this happens right next to everyday people in need who don’t often take vows.

That’s just me. I get “templed” and “monked” out quite quickly when it comes to these things nowadays.

None-the-less I approached my visit to Lumbini’s temples with as open a mind as possible. I was going to hire a bicycle but thought an early day’s walk in the hot humid weather to be more insane.

Hiring a rickshaw and saving the best temple until last

The rickshaw touts outside the main gate were fairly okay. I declined.  Instead I watched a monk at the entrance get out of a new SUV while talking to a guard. Then take out his shiny mobile phone. Get back in the car and drive on.

I plodded on in the heat behind the plume of monk driven dust. I paid my 200 rupee “foreigner fee”. Grumbled at having to pay another 20 rupees for a camera. Then quietly hoped and was thankful I didn’t get charged another 200 additional rupees for a video fee.

I noted the typical Nepalese separate prices listed on a board. And then noted it wasn’t just Nepalese but “Nepalese and Indian” prices. Hmmm.

Next up a 15 minute walk up a pleasant enough driveway like road in the not too pleasant searing heat. At the top I was lost. Go right or straight? My guidebook map was useless and NCell was not able to load google maps. Lovely.

A couple of uninterested rickshaw drivers asked if I wanted a tour. Prices started flying. I walked away claiming I knew where I was going.

Five minutes later I was back having just walked straight into a chained off area. Rickshaw around Lumbini’s temples it was then …

When guidebooks and apps fail in Nepal – just take a rickshaw!

There are a lot of temples in Lumbini

My decision to take a rickshaw rather than walk was an exceptional one. Lumbini, it turns out, is a lot bigger than my not to scale map made out. A lot bigger. Even if I’d hired a bicycle I’d be not have enjoyed it all so much. Well, not unless I knew the area better or had a proper map.

The rickshaw driver was also like a walking tour guide. He knew the names of all the temples and locations. While not so great about the detailed history of each temple we at least shared something in common with being templed out. Later he’d nearly get me kicked out of Lumbini for this expertise, but at least he was likable chap.

Here are some reasons why you might get templed out:

In between all these there seemed to be temples from nearly every country in the world. We started with the French Buddhist temple. It looked nice from the outside. Then at the entrance was a monk and what I took for as a Frenchman. They were collecting shoes for people who wanted to go in.

My pet hate is removing my shoes. That and French man looked as if he was about to launch into a convert to the way of the Buddha spiel as I approached. So I diverted to the Tibetan temple next door. Apologies to the French.

The Tibetan temple was a colorful one. Far more colorful than the Tibetan temples I’d seen in Tibet. Perhaps understandably so. It even passed my test to be suitably impressive enough to remove my shoes and actually go in.

Smooth stone flooring helps with shoe removal. A decorative mini garden and a pond distracted me well. All this in front of the impressively tall temple itself. There were quite a few people visiting this temple compared to many of the others in the area. Temple eye candy counts I guess.

Inside was just as colorful. A roof ceiling emblazoned with highly vibrant greens, reds, blues and vivid designs. Meanwhile the shiny marble floor held the center attraction of a Buddha statue.

A meek “no camera” sign and security guard had me wondering what the camera fee I’d paid for was for. I stepped outside and held my camera up. No good, the door cut off the ceiling. It was then the guard came over and said it was okay to take a photo! Finally some karma payback for being shoe-less perhaps?

If you are curious here’s a big photo from inside the Tibetan Temple in Lumbini.

I could write about every temple I visited in Lumbini but even I am not that sadistic. Basically unless you are well into your Buddhism. Have a fascination for Buddhist temples or  have a penchant for documenting things (waves)  then it can get a little tiresome.

Many of the temples are actually closed. And a staggering amount were still under construction. Indeed that final point is why I chose not to fully document all the temples in Lumbini. Concrete shells and scaffolding don’t quite make a nice photo.

Instead I stuck with the complete temples and saved my socks some wear and tear for another day.

One thing for sure. It really is amazing just how many countries have temples here from around the world.

The eternal flame of Lumbini

On our way to Maya Devi we trundled by the eternal flame. Always curious I jumped out to read the inscription.

Conclusion on spending a day around Lumbini’s temples

Again, there are lots of them. Unfortunately many are not fully completed and are no more than concrete and scaffolding. Others look near abandoned. Others again were closed.

They are spread out into zones. I’m really glad to have taken a rickshaw rather then cycle around or more insanely walk. Especially if visiting in either monsoon or hot seasons. I’d have liked to have brought a packed lunch and very glad I brought extra water. I stopped off at a small eatery with the rickshaw driver and found some soft drinks with ease. Good food was scarce.

The second best thing I did was leave the star attraction to last. The Maya Devi Temple – Birthplace of the Buddha and one of the most revered religious / ways of life places on earth. A place that my loyal rickshaw driver nearly got me kicked out of …

I use Zenfolio to host my photos & have done for years.

Display them with pride

Use my discount code and get 10% off!

16 Replies to “A quick tour around Lumbini’s temples”