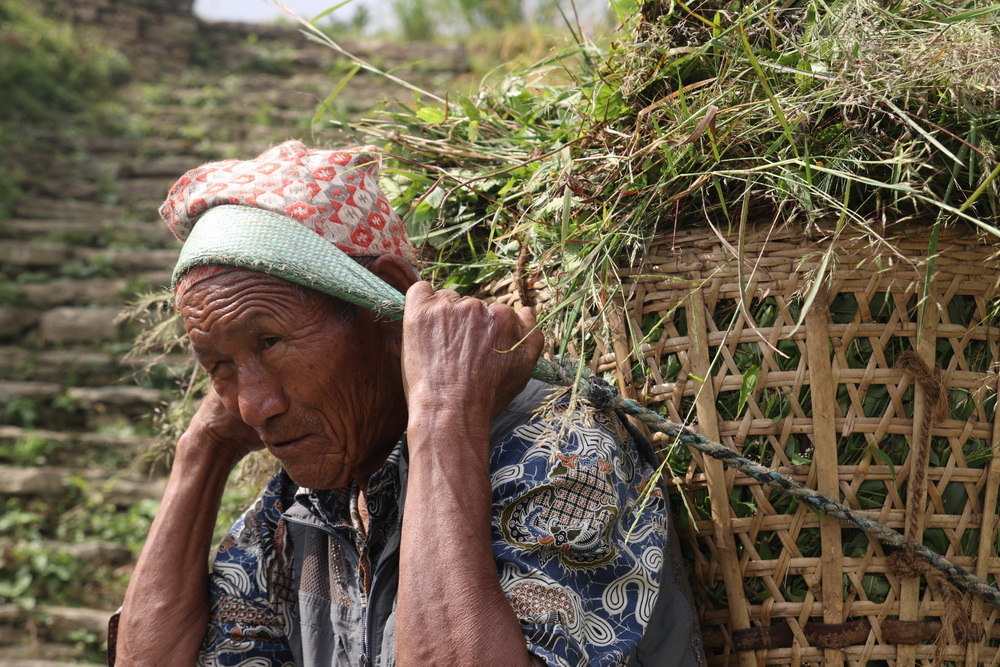 Breakfast in Bhanjyang before the descent

There’s no doubt you can come back to Pokhara from Panchase on the second day after sunrise. But the restful afternoon after the sunrise was enjoyable and relaxing. The next morning it meant there would be no rush either. We got up, avoided the rice pancakes and dove into large bowls of porridge and honey.

There was cloud already moving in. We had indeed planned sunrise just right the day before. Otherwise we’d still be spending another day up here waiting for another morning opportunity.

A big breakfast before going back to Pokhara is essential in Bhanjyang as there are very few places to eat or stay on the way back. That said, the route we’ll be taking is filled with forest, rural villages and farmland. A little different than on the way up! Bags packed we headed off around 8.30am.

The different trekking routes of Panchase

We immediately started down a series of steep stone steps that were yet again slippery from the wet cloud.

This route back would be completely unmarked. The Panchase trek suffers from being incomplete in the sense that it is well marked going up, but there’s nothing to show the way going down. Unless of course you want to go back the same way.

Unfortunately over the years trekking guides, rumors and the odd guidebook have listed over five different return paths to Pokhara. One of them is the “World Peace Stupa” route. A route that sadly saw at least one person die a few years ago. The route is completely unmarked, in thick forest with zero houses or shops and really not suitable if you’ve never trekked before. We preferred a much safer and enjoyable route down.

From Bhanyjang it’s all steps, farmland, forest and two villages to the bottom. The safest route is again the way we came up. But there is another route down that would take us on a route through farming villages, forests and valley views. Best of all it was going to mean a change of scenery than the one going up.

The official marked trail to Panchase is the best route to take. It’s nice. No question about it.

We had cloud but got lucky on the second day. The route has signs pointing in the right direction.

The other route up is the same one my guide elected to take going down. It ends in Ghatichhina village where you can catch a bus. We could have started from here but it’s literally not that much fun going up from this direction. Just lots and lots of steps with few views and no place to eat. The way we went up had views and a nice place to eat along the way.

Going back down is a different story. Again, the safest without doubt is going down the way you came up. I would 100% avoid the World Peace Stupa route. Not just because there’s an element of danger. But just because it’s an comfortable trek. You would have already seen the same forest land going up and if you visit the stupa from across Phewa Lake.

Trekking through a broken trail on the way down

The forest path going down is broken up with a dirt road crossing across the old trekking trail.

There’s no traffic at all so the only issue is to find the trail again. Whenever we came across the road which cut off the trekking trail it started again directly opposite the road. My guide found these trails with extreme ease. Whereas I had to poke my head over the side of the road to confirm on a few occasions.

My friends 14 year old son found the route going down a lot easier than going up. Maybe it was the fact he’d soon be back in the land of Wifi that was motivating him. For me I found the downward steps rather taxing. My guide was smart enough to let me take some of the dirt road going down and then rejoin the trekking trail. While I don’t like the dirt road, it did offer a brief respite from the steps.

Again, my trekking poles were incredibly helpful on the slippery stone steps going down.

From mustard fields to rice paddies and pasture land the farmland surrounding Panchase was gorgeous. We were here post-monsoon and everything was a lush green with dashes of color.

The village Sidhane was no more than a few stone houses but surprisingly there were some stone shrines marking the pathway down. It was refreshing to see shrines on a trekking route through farmlands like this.

There were two suspension bridges en-route. The first I had no issue to climb across. The other closer to the next village had a modern concrete bridge next to it.

Damdame village was charming with a steep stone path cutting all the way through it. Friendly locals waved and said “Namaste” throughout. We could have eaten in either place at a local house. However my guide was unsure about the food in this area. With trekking bars in hand we continued on unabated.

End of the Panchase trek

There was one last steep set of steps though a little forest area to cover. I didn’t expect that we were at the end of the trek when we arrived in Ghatichhina. It just seemed like another village with the dirt road going through it. However when we turned a bend there was a shiny new 4×4 which told us we were back in civilization.

Indeed after one more corner there were two buses parked near a bridge. 100 rupees each to Pokhara’s Lakeside and leaving every 30-60 minutes.

I had come full circle. Years ago I had arrived at the village on foot and surprised a friend on the phone by saying I was there with he then exclaiming I was nearly in Panchase. It all made sense now.

Panchase really is just a walk away from Pokhara!

While the return journey may seem visually lackluster compared to sunrises and so forth but the views of farmlands and villages are indeed lovely. Bringing some snacks and plenty of water helps!

If you are looking for a short 2-3 day trek with with good views, forests, Nepali farmlands and stone villages then give the Panchase trek a look.

Here’s my free online trekking guide to Mardi Himal. As always, if you’d like to know my guides details then you can contact me or better yet get one of my guidebooks below which has a host of local guides details and a free Panchase Trek supplemental guide with map.

If you just arrived at this page then here is the full list of the Panchase Trek details: