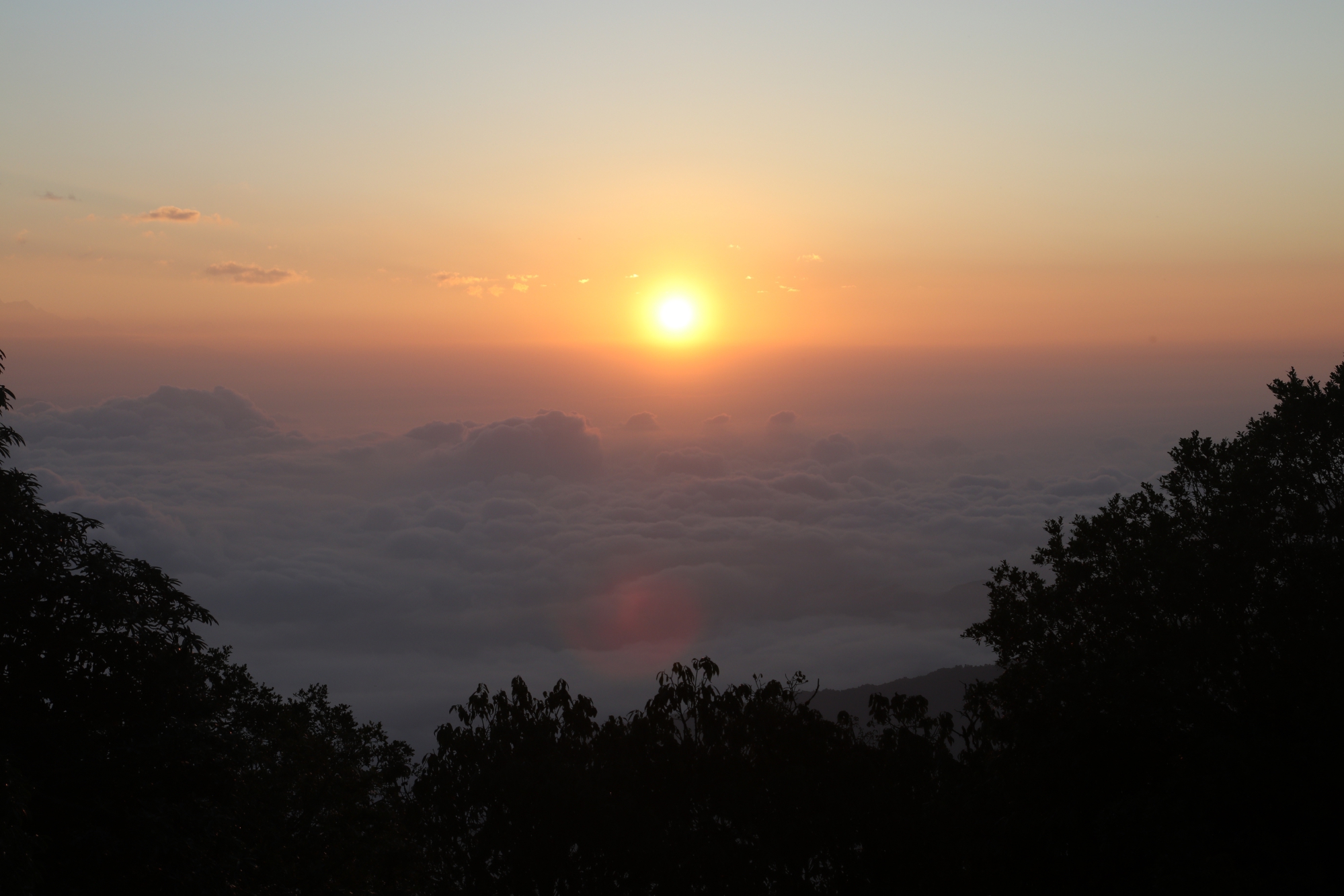 Bhanyjang to Panchase Peak for Sunrise

Leaving Bhanyang at 4.30 am for sunrise was initially not that difficult. I’d been awake for an hour waiting for our scheduled kick-off time. My guide was ready and my friends 14 year old son didn’t need too many threats of an ice water bucket to get him out of bed after our trek up the day before.

It was dark. Despite stars overhead the first few steps in the forest area were near on pitch black. We had head-torches aside from my friends son who was adamant his phone’s torch was enough. In all cases the torches only lit spotlights on the still wet stone steps. I’d decided that my yet to be used trekking poles would be a good idea at this time of the morning. They were possibly the best thing I’d brought on this trek.

The stone step trail twisted and turned initially. My guide took the lead which was helpful as he seemed to know every step of the route. Meanwhile I was a lot more cautious about trekking in the dark on top of new terrain.

We were about 30 minutes into the 90 minute trek in the dark when I noticed my friends son was trailing behind. We went back. He was hobbling. Apparently his ankle was “sore”. If we continued on there was no doubt we’d miss sunrise. Likewise if we all went back.

The weather was still clear. The clouds and unpredictability of the weather this season told me this might well be our only window of opportunity for several days to see the mountain sunrise. It was my trek. I made the call.

I told my guide to go back with my friends son. Once he was settled and safe then he could catch up with me again. I would go on alone. My guide was reluctant, but understanding. Somehow the teenagers “twisted” ankle seemed better once he knew there were no more stone steps to climb. I made a mental note about trekking with reluctant teenagers and trekked on alone.

Trekking in the dark to see the sunrise

It’s not the first time I’ve trekked in the dark. I did it on the way back from Everest Base Camp. This time I was alone in the dark forest. It didn’t help that I had read about a leopard attack in another area of Nepal a few weeks beforehand. It was so very silent in the forest alone at night.

Dew dripped from the odd tree and splatted heavily on the stone underneath. I stopped. Looked. Listened. Trekked on.

After thirty minutes I paused for water and listened carefully for my guide. Nothing. Above me the stars had faded and cloud had moved in. It got darker. It seemed as if a mountain sunrise was not to be.

I trekked on with my trekking poles clacking against the stone steps. The trail twisted sharply and got steeper. The sky began to illuminate as dawn approached. I could make out a forest peak ahead. Then, behind me the unmistakable sound of a twig snapping. I paused and turned. Waited, looked and listened. A spotlight bounced into view. My guide had made it back in record time!

With my guide once again taking the lead we trekked faster and within ten minutes were at a junction of sorts. Head-torches off we walked up to, of all things, a helicopter landing pad. The horizon sky was waking up with dark clouds appearing with orange linings.

My guide suggested we go to the “baba’s” place to see the sunrise from there. Directly opposite the helicopter pad was a gate leading to the teahouse on top of Panchase peak. There was a Shiva shrine here and a small hut where a local Sadhu or Baba lived. My guide ducked into the teahouse to check out if they had any breakfast and as he did I noticed the mountain sunrise from behind the building.

The majestic peaks of Macchapuchare, Dhaulagiri and Annapurna appeared with hues of purples, yellows and oranges. We walked back down to the helicopter area where the sun appeared in a brilliant ball of orange. Another two trekkers appeared. The first so far.

Just beyond the teahouse you can make out a small chaitya on another hill. My guide said there were even better views from there. We made the short 20 minute trek over and past the chaitya to a small clearing with two seating areas.

To the right were much clearer views of  Macchapuchare, Dhaulagiri and Annapurna. The second area had views of Lamjung. I’d seen these views on other treks before but these were far more panoramic. However there was something else that was equally impressive to me. The rolling clouds beneath us.

My guide came into his own here and started to point out things like the sound of deer bleating out. Then the early morning birds of prey swooped up over the clouds that hugged the green tree line under us.

Panchase at dawn was offering something that you don’t always find in other treks in Nepal.

The natural beauty of nature waking up. A couple appeared at the lookout point. They asked for their photo to be taken with the sunrise. I took it. They cooed at each other and we left them alone to enjoy the moment.

The slippery trek down

The clouds, warm sunrise and nature left there mark on the stone steps leading down. They were now glistening with moisture. I can’t help but emphasize how great trekking poles are against such trekking adversaries as wet stone steps.

My boots slipped more than once. The trekking poles stopped a fall. Another trekker without trekking poles was not so lucky. She slipped hard right in front of us. My guide rushed to her aid. She was silent as her partner came back up to help her. We’d seen them the night before at Bhanyjang but they where the type of people to look the other way when they see other tourists. We asked if she was okay and she nodded. We trekked on only to hear her burst into tears once we’d turned the corner.

We reached the bottom and into Bhanjyang by 8.am. A breakfast of pancakes was a good reward. Unfortunately the pancakes were made of rice flour which does not exactly make a good pancake. So, after prising my friends son out of bed we had a second breakfast.

To stay another night in Panchase or go back to Pokhara?

Decisions, decisions. The clouds were rolling in again. The sense of accomplishment was growing. That morning had indeed been our only window of opportunity to see the mountains. The choice was to trek five hours back to Pokhara that afternoon or relax back in a pleasant teahouse garden enjoying the warm sun as it occasionally broke through the high cloud.

The choice was an easy one. Made even more easy by joking with my friends son that we would stay another night and go back up for sunrise again tomorrow now that his ankle was miraculously better!

Lying back on the grass I enjoyed the valley views below. Trekking is not all about hard work. It’s also about enjoying the moment. Tomorrow on the way back down I was sure there’d be another mini-adventure waiting for us.

Sunrise from Panchase Peak will change slightly depending on the time of year you are visiting. However one thing remains true. If the stars are shining at 3am there will be a sunrise.

Trekking poles and head-torches were invaluable.

Meanwhile do check out my online guide to the Panchase Trek and next up we’ll be covering day three of the Panchase trek here.

If you just arrived at this page then here is the full list of the Panchase Trek details: