The Austrian expedition company Furtenbach Adventures announced on Saturday that they were cancelling their attempt at climbing Mount Everest this season. Such calls are usually made due to bad weather. In 2021 it was due to an increasing number of COVID-19 infections at base camp. Something that Nepal’s tourism spokesperson does not seem to think is that critical.

In a dazzling week of Nepali news we had the Nepali Prime Minister on CNN saying there was no problem (Source: CNN). While a few days later he wrote on the The Guardian newspaper that Nepal needed help (Source: The Guardian). He then lost a vote of no confidence. Then, he won re-election.

Meanwhile back in reality on the ground in Nepal things continue to spiral downwards due to oxygen shortages in Kathmandu and a rising number of COVID-19 cases at Everest Base Camp.

“We cancel our Everest expedition

(Everest BC, May 15, 2021) Furtenbach Adventures is the first expedition operator to cancel its current expedition on Mount Everest. The number of people infected with Covid in the base camp is increasing, for safety reasons the expedition is therefore ended immediately and the return journey started.

‘I didn’t make the decision easy for myself. But to climb above base camp with these massively increasing corona numbers and risk the lives of our 20 customers, 4 mountain guides and 27 Sherpas carelessly, would be irresponsible,’said Lukas Furtenbach, Managing Director of Furtenbach Adventures .

In the past few days, the number of people infected with corona in Everest base camp has increased massively. ‘With some teams, elementary precautionary measures were simply not observed. There were meetings between the teams, there were celebrations and parties were held. That is why there is a sudden increase in corona infected people. Our team remained isolated the entire time, our doctor did tests regularly, now even daily. But now the point has been reached where we pull the plug, ‘says Furtenbach, who is also very surprised that nothing is being done by the official Nepalese side.

The high camps on the mountain have been set up in the last few days, and the clients are well acclimatized. A further ascent is too dangerous because there is much less space in the high camps so that the risk of infection increases automatically. ‘Anyone who becomes infected with Covid at high altitude, then develops symptoms and becomes ill, is very difficult to help. We do not take this risk, not for our sherpas and not for our clients and guides, which is why our expedition is stopped immediately,’ said Furtenbach.”

“Some” in Nepal seem oblivious

“Mira Acharya, director of Nepal’s tourism department, denied the severity of the situation at the base camp.

‘Doctors at the base camp said the situation was not as serious as it was reported,’ she told Reuters. (Source: The Guardian)

Meanwhile, even China has cancelled its own 2021 peak Everest Climbing season (Source: Reuters)

On the ground in Nepal trekking tourists are incredibly frustrated at the mass confusion due to international flights being cancelled. A hotline and emergency contacts have been released to help tourists. However, from personal experience I would say contact your embassy, then start calling the airlines they advise you to contact.

Some countries like the USA are arranging emergency flights out of Nepal. However the details are scarce. Others like Russia want to send an Aeroflot plane but are being told they haven’t been given permission to land yet. A crises center known as Stranded in Nepal has been set up.

Here are some helplines:

If calling internationally:
Use country code +977 (Nepal)
Omit the leading 0 (zero) from the number

#StrandedinNepal2 – if the first one is full

What is going on?

I wrote last week about the second wave of COVID-19 in Nepal. If you read that, then you’ll know what’s going on. The Everest summit cancelation is long over due and will no doubt hit the headlines over the coming days. Nepali authorities have been stuck in a political quagmire while COVID-19’s second wave has been raging all around.

As Europe and the USA start to come out of lockdowns, Asia is facing a second wave of COVID-19 spearheaded by the new Indian variant which is more contagious than the British variant. In the UK at the moment scientists are worried about the severity of this variant. We seem to be playing a deadly game of back and forth with COVID variants.

This deadly game would not be so bad if it wasn’t for the obvious lack of care in Nepal. Much like the 2015 earthquake it seems like it’s up to individual people to look after themselves rather than depending on those in charge.

Now we now the rules, we can do something

Previously people held out hope. Now that hope is taking action for oneself. Many Nepali are returning to villages away from large gatherings. This despite vaccinations mainly being given in the big cities. People are now aware that the best thing to do is self-quarantine away from others.

There’s no point waiting for rescue flights of vaccine as there are no flights. Some in charge are in denial the problem is so severe yet in return for some flights being allowed the incoming flights will have “donations” of oxygen supplies. Where these end up, nobody is sure.

There are 18,000 Chinese gifted oxygen cylinders at the border of Nepal for the past few days waiting to be picked up – meanwhile everyone is wondering why they are still at the border?

While all of the above seems bleak, it’s also a relief. We will look after ourselves and not rely on those that should be doing it. Much like the Everest summit that was just cancelled, it’s time to use common sense instead of dependence. We see things getting better in the rest of the world and we know it will be a tough wait until the same happens in Nepal. Vaccines are appearing, things will get better it’s just not going to happen so soon.

I am safe. My good friend who contracted COVID-19 last week despite having one shot of Sinovac vaccine 3 weeks ago has recovered. I’m working on the Kathmandu Valley Heritage Walks international edition. If the simple life is something you enjoy then Nepal is just that for many now. People are farming lands in the knowledge that the rains are soon to come. This year crops will be more important than ever as incomes did not happen this year.

In rural areas the internet is either too slow or not working. People are for once not getting caught up in politics or negative media. It helps for what’s going to be a long summer of discontent elsewhere. The land has returned to prominence with farming. The jobs no one wanted to do before are now being completed. Houses are being built, sanitary drains are been tended to. People know where they stand now.

We wait for news on vaccines. We look to other countries to see how the variants are reacting there. We sit in relative safety waiting for the right time to come out into a better world. It could be a long wait.

I published Kathmandu: Signs From The Past last week in an effort to help those who are in lockdown and can’t work at the moment. Thank you to those who purchased it! We are making a difference and hope to continue making that difference over the worst of this new outbreak of COVID-19.

Basically, it helps keep people inside instead of wandering outside looking for work. It also means we’ll be able to print the book in Nepal once things open up. Profits from this book help those who are in lockdown with no government support & who’ve just lost their jobs.

Unlike the Earthquake, it’s not about aid as vaccines simply aren’t available to give. This time it’s just about surviving the worst of this outbreak. This is the only way I think that I can help with immediate affect. 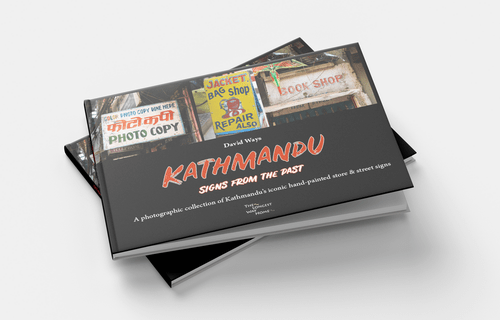 This is the only book of its kind in the world – own it and you’ll own a piece of history too!