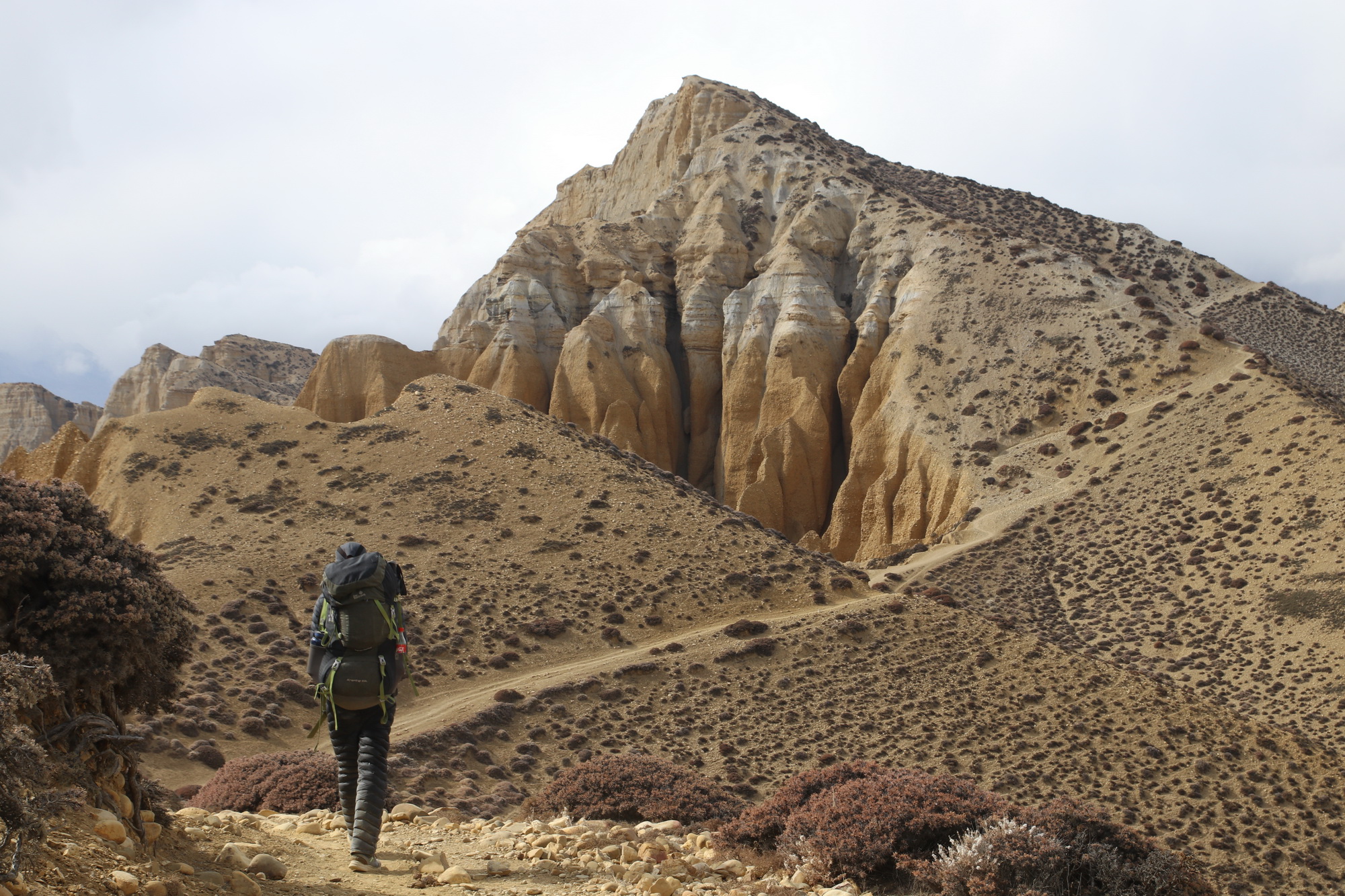 The Longest Day on the Upper Mustang Eastern Trek

After yesterdays exploration of Tange village waking up at 5 am for what would be the longest day of trekking in Upper Mustang was a little harsh. Prema had prepared a bowl of porridge for me along with a pancake which I found difficult to finish at such an hour. She was a great cook and was now finishing our aloo partha’s (bread stuffed with potato) which would serve as our only food until that evening when we expected to reach Chhusang.

There are no tea houses, stop overs or places to even get water between Tange and Chhusang on the next part of our trek in Upper Mustang Eastern route. Moreover the day’s trek would involve traversing up another plateau, crossing it and then going over unmarked trails over undulating mountains. This is not what bothered my guide nor K’s guide. They were more worried about the last sections legendary winds which could “knock a man off his feet”.

None of this seemed to worry me. I know Nepal quite well and such stories tend to spread as late night teahouse fireside stories. None-the-less K, his guide and porter had left well before us. I still lingered on to take some parting photographs of Tange.

The first ridge we needed to climb up to looked far easier than it was. The first section was more mound than mountain. However, beyond the mound we were at an steep incline for hours. I trailed behind. Somehow lacking the energy I needed to keep up with my guide. Perhaps the route from Yara to Tange or the trail-running had tired me out more than I realized. Later I’d find that such running the days before has caused my toenails to be bruised black. They would stay that way for weeks.

We crossed over the pass and as we did Upper Mustang’s mountain scenery once again changed. Golden hues now formed in the mountains around us. If it wasn’t the morning they would have suited a sunset quite wonderfully. We crossed some narrow ledges that had been propped up by mere stones under splintering tree trunks. My guide informed me that the repairs had been carrying out by the women’s group we’d donated to the night before.

The Tange yaks from yesterday evening walked passed us with a horse and their handlers. We were all headed to Chhusang. Clouds rolled in and then rolled out again as if signalling the change in terrain. Gusts of wind began to charge down at us. The winds were early. Too early.

Perhaps the legends of gale force winds were indeed true. We trekked down the opposing valley and at the bottom came across a lone one roomed house. Like before, the door remained unlocked. The remnants of a fire lingered inside along with a deep smell of burnt tar. Most likely a sheep farmers random abode in the mountains.

We trekked back up the other side of the valley and were sheltered a little from the wind. However, as we turned a bend at the top the winds whipped us with welcoming delight. The trail led down and against the side of a golden mountain speckled with deep brown thorn buses. At first the bushes were sparse but within an hour the entire side of the mountain was covered in them like a leopards spots.

The thorn buses were no more than a foot in height and two feet in diameter. Though winter, some still remained bright in color. Reds, purples, greens and the odd shade of pink. These low to the ground thorn bushes are worth staying clear of. Their namesake holds true with vicious razor sharp thorns ready to fend off even the hungriest of Yaks.

The surrounding mountains golden tones were some of the most intense colors on the trek so far.

It’s no exaggeration to say that the mountains of Upper Mustang changed everyday on our trek.

By now it was lunchtime and the winds were going at it full blast. Cold and unrelenting I stopped to put my windbreaker on. It was then I noticed that the winds were so strong they had torn the bottom section of  my trekking trousers that were now ripping further up my leg. I tucked the end of my trousers into my socks as we opened up and ate Prema’s Aloo Parotha which was, miraculously, still warm. Though after holding a piece in the winds for less than a minute gained a chill.

That afternoon we reached an impressive pass with our trail etched out along a mountain ridge below. This was what I now called the golden gale steps all the more robust.

To our right was a wonderful golden valley which had large bulbous funnels formed from centuries of harsh winds blowing up their channels. Interestingly these channels turned to narrow 2 inch cracks along the trail before merging back with larger channels to our left. When a gust of wind blew along these 2 inch channels it would blow out a wall of dust that would plume up into the air in front of you.

The channels to our left bore all the hallmarks of hard winds over the centuries. Waves of sands and rock had impressively formed on their surface. Every few meters this buffer like wall of rock would part ways and beyond it I could see a stunning valley with blood red strata forming vivid patterns against the blue sky. Large golden pinnacle rocks appeared in the distance and then up close as we trekked by. As if taking advantage the gale force winds would charge though the open areas and one would need to regain focus on the path ahead.

Our decent to the last plateau

Having passed through the golden gale ridge battered but not broken nor knocked over we descended into an amazing golden passageway surrounded by tall pillars of rock. It’s here the loose rock underneath became difficult to walk on. Stones slipped and slid with reckless abandon. Trekking poles were needed to avoid a harsh fall. At the bottom of this passage a wide open plateau, our last, awaited.

Of all the terrain we trekked through in Upper Mustang and eastern Mustang I found the flat plateaus to be the most otherworldly. Perhaps seeing their vastness just before entering Lo Manthang is what sparked these thoughts. To me they very much had a similar vibe to the incredible Martian landscapes you would see from NASA’s photographs. Rising up from the ground in giant sheets of flat rock their walls looks like impenetrable fortresses with finger like mountains of sand piling up along the edges. At the top they were flat and windswept. Arid desserts in a sea of stone.

Our last plateau was no different. Strangely the winds had died down a little so the plateau before Tange was more blustery. Thorn bushes gave way to a trail that lead to a stony decent to Chhusang.

We had come full circle in our trek around Upper Mustang.

We passed by one my favorite villages of Tangbe from above. Not to be confused with my favorite village of Tange behind us. Chhusang looked grey in the late afternoon light. But the Britikuti guesthouse staff remembered us well and suggested we order now and grab a hot shower as a group had just arrived. The realization of trekking groups and hot water was a bitter sweet jab that we were back in “civilization”.

The shower was indeed hot and made short work of the days blustering sand. Our dal bhat was ready in the rear dining room where the owner sat with some of his friends. I asked my guide where K was only to hear he’d arrived an hour ahead of us and his guide had insisted he take the last bus to Jomson.

I was slightly sad at not having an opportunity to say goodbye to the old Japanese man. He was faster and stronger than people half or even one-third his age. We pontificated that his guide wanted to leave as soon as possible. One day before the Upper Mustang Permit expired.

The Britikuti guest house owner looked on at me and diluted the memory of K.

“You came from Tange?”

I nodded back as I dove into a plate of Dal Bhat.

Confirming this, I smiled at him.

“Tough winds, enough to blow a man over …”

My guide asked if we too could take a bus to Jomson.

I knew he was tired but with one day left on the permit I wasn’t about to let it slip away. Tomorrow we would leave Upper Mustang as we came in. On foot.

There would be winds again, the same winds that battered me ten years ago. Not enough to knock a man over, but enough to sting his face with a memory.