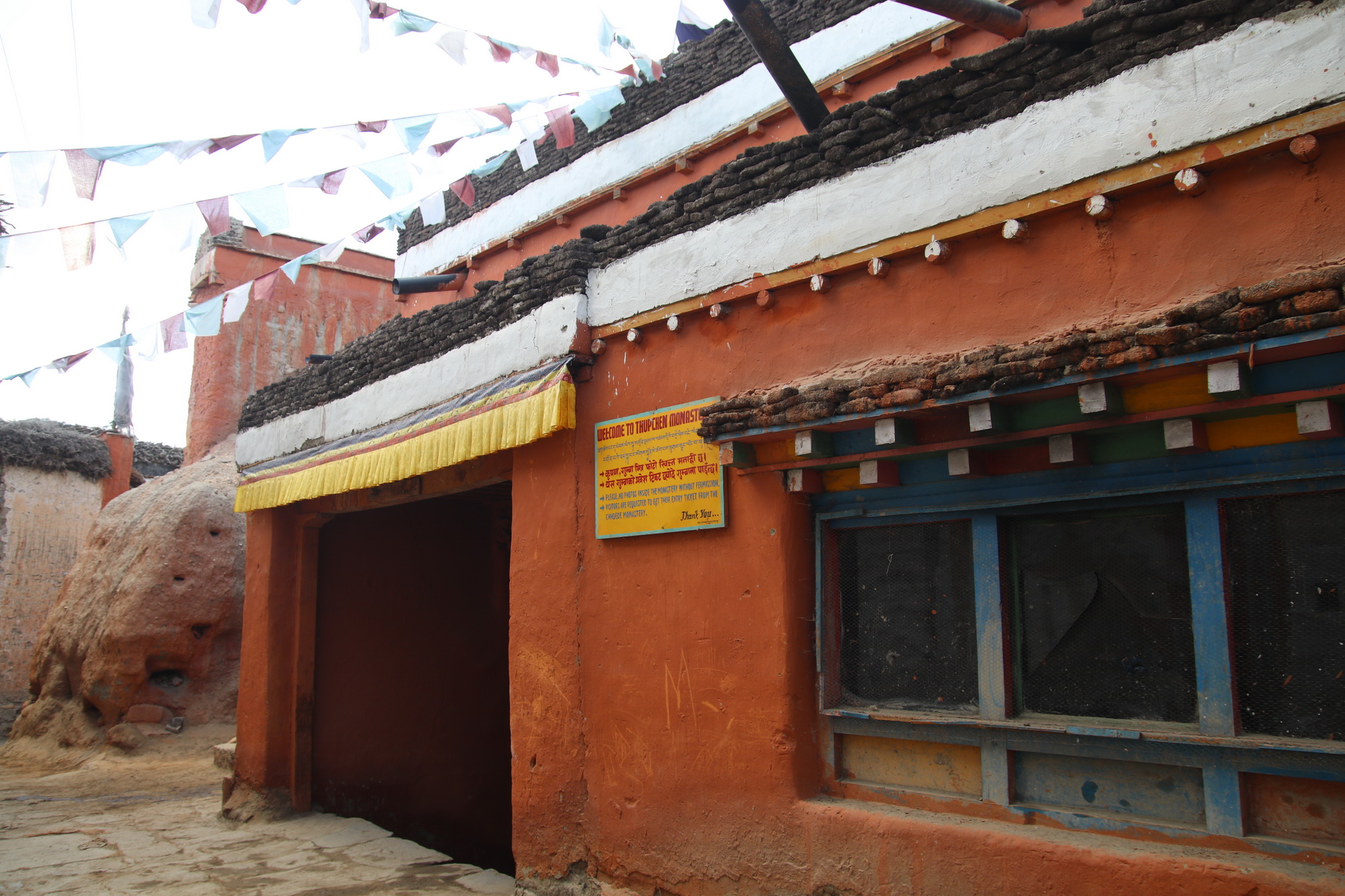 The famous monasteries of Lo Manthang

After exploring the great castles of Lo Manthang and filling up with a good lunch from our host Prema it was time to finally visit the fabled monasteries. Lo Manthangs monasteries or Gompas, have built up quite a reputation over the years and have attracted many tourists. Some guidebooks mention the three monasteries of Dragkar-Thegchen Ling Gompa, Jampa Gompa and Thupchen Gompa as a highlight of the city. They also  put a negative spin on them by saying they are continuously locked up with confusing and high entrance fees.

Let’s knock this outdated and delusive information to the past. The monasteries open every afternoon between 3pm-5pm. To visit them all you first visit Dragkar-Thegchen Ling Gompa and the caretaker monk whom you pay 1,000 rupees to. He will then escort you to visit all of the monasteries. Perhaps the biggest revelation in all this is that there are not just three monasteries but there are in fact four monasteries plus a museum to visit in Lo Manthang.

Despite paying 1000 rupees you are not allowed to photograph inside any of the monasteries. In fact the monks follow you and even the mere motion of reaching for a smartphone, let alone a camera, will have them waving you off and blocking the view of a statue. Considering I’ve visited Tibet and the Potala palace where one can photograph inside along with the many monasteries of Kathmandu I find Lo Manthang’s no photography rule the only let down.

How to photograph inside Lo Manthang’s monasteries

I met with the caretaker monk at one of Lo Manthang’s monasteries and inquired about the rules and regulations of photography there.

Apparently there is an “exception” to the photography rule. For the purposes of making a documentary you can pay USD $100 to photograph inside the monasteries for one day. There’s no half day price nor a price just for one or two photographs.

This rule and the money involved is more interesting than it seems and stretches beyond Lo Manthangs Buddhist buildings as I’d soon discover. It is in part linked to the curious “no photo” mentality in Upper Mustang I’d come across earlier.

A little later I’d meet some locals who sadly filled me in on the final snippets of information about the “no photo” reaction people have here. You can read about that on my final day in Lo Manthang. First though, let’s visit the monasteries.

Dragkar-Thegchen Ling Gomapa is Lo Manthangs most famous and largest monastery within the walls. It was built during the period of King Ama Pal when it was known as the Kingdom of Lo during the 13th century.

It currently houses some of the highest ranking lamas in the region. Throughout the 16th and 17th century many of the artifacts within it were destroyed by an earthquake. Interestingly this is where Lo Manthang’s fourth monastery appears as it is located within the same complex.

Unfortunately in the 17th centrury Chode Gomap caught fire destroying yet more of the artifacts which were then moved back to the newly restored Dragkar-Thegchen Ling Gomapa.

At the back of the Dragkar-Thegchen Ling Gomapa and Chode Gompa is the Monastic museum. This building was established in 2008 but was severely damaged during the 2015 earthquake and remains closed. It was dedicated to preserving precious artifacts from other monasteries throughout Upper Mustang.

Included in these artifacts were manuscripts dating back over 2000 years. There were also Bonpo scriptures from 3000 years ago that were painted in gold or carved into wood. Apparently there is also ivory on display from a mammoth in the museum.

The Dragkar-Thegchen Ling Gomapa even has its own website http://www.tsechhen.org.np/photo-gallery.php where you can see some images from festivals that take place there.

Near to the center of Lo Manthang stands the large Jampa Monastery. Built in the 14th century by King Ama Pal’s son King Angon Sangpo. This monastery seems to have been constructed knowing the damage earthquakes can cause by having 5′ 4″ thick walls. Not a bad idea considering inside the three-storey monastery are 109 ancient mandalas painted in gold, silver and turquoise.

Images and stories decorate the first floor while statues and mandalas cover the second. Unfortunately the third floor is off limits.

The final monastery is located around the corner from the Jampa Monastery. Built by the third king of Lo, Tashi Gon in the 15th century it was a major center of religion in the kingdom.

Overall thoughts about the monasteries in Lo Manthang

There are four monasteries in Lo Manthang’s walled city. I’m glad that this can now be laid to rest. It costs only 1000 rupees to visit them all but you can’t photograph inside. To photograph or video inside there’s a flat USD $100 fee. The monks in general were friendly like most people in Upper Mustang. I don’t fault them for not allowing photographs. As they mentioned themselves they are only following orders. Again, I’ll cover this whole photo issue in the next installment of my treks in Upper Mustang.

Are the monasteries worth visiting? If you like Buddhism then yes. If you’d like to see “inside” famous monasteries then yes. Are you going to see something vastly different than in the other monasteries … well it depends on your knowledge of the history of these particular monasteries.

Most of the statues within the monasteries of Upper Mustang are behind not so clean glass. This is common practice in Nepal. Clearer imagery can be found in the Kathmandu Valley. Do see my guidebook on Kathmandu Valley Heritage Walks for a bevy of equally aged Buddhist and Newari monasteries.

Again, personally speaking I’m not into the Nepali practice of paying to enter a Buddhist monastery. It goes against the principal of Buddhism. Giving a donation, I don’t mind. But with so many Buddhist monasteries outside of Nepal not charging and then in Nepal being charged – including a hefty fee to Buddhas birthplace in Lumbini I feel a little wayward in the whole teaching of Gautam Buddha at least.

Next we’ll be venturing to the caves of Jhong on horseback where there are cave houses to explore and more monasteries which are free to enter. Some of which are carved right into cliff faces. They are stunning. Moreover, there’s more exclusive inside monastery photographs to come!