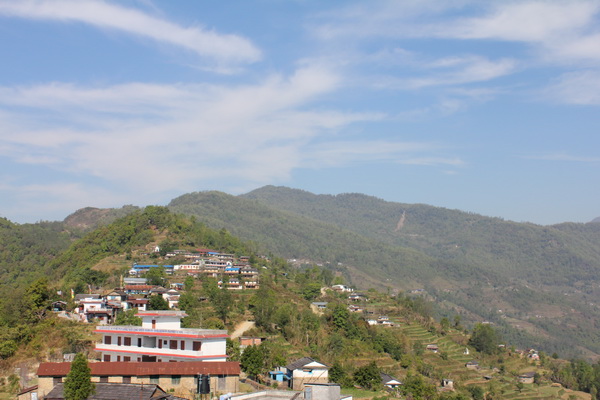 Calling the Mardi Himal Trek “hidden” is a little adventurous. However, the trek is relatively new as it was only opened in 2012. Among mainstream trekkers not much is known about it. Which is both a blessing and a …. well, blessing.

As the vast majority of trekkers take on the Everest Base Camp trek, the epic Annapurna Circuit or the impressive Annapurna Base Camp the ones seeking less crowds and magnificent views head to Mardi Himal.

I’ve been on this trek twice. This is my day one of my day by day account of the Mardi Himal Trek that I’ll be publishing over the next few weeks. I’ve also written an online guide to Mardi Himal and this trek is covered in depth in my trekking in Nepal guide book.

Day one on the Mardi Himal trek: Pokhara to Dhampus

My first Mardi Himal trek emphases the bonuses and perils of trekking with an unknown group. They were a Polish couple looking to share costs. It seemed like a good idea at the time.

Permits in order we headed off on a local bus to Hemji and the start of the trek. It’s really important to note that there are about three different places to start the Mardi Himal trek depending on the duration and type of trek.

The start of Hemji was a dry and dusty road. The Polish couple immediately started to complain. Not a good start. As many know the first day on any trek sees you move along some roads to the trail head and then slowly onto the actual trekking trail. They didn’t like the idea of jumping off a bus and onto any road…

The dusty trail to Dhampus

I can’t pretend I found day 1 interesting. It was a short 4 hour trek of which 2 hours was along a dusty road. But soon the road narrowed to a trail and pristine green forest soon followed.

Personally I preferred my second trek to Mardi Himal starting at Phedi!

It was uphill all the way from the start and not very strenuous. I’d been to Dhampus before and enjoy the tiny village quite a lot. You don’t need a trekking permit to visit Dhampus and the views of the Annapurnas can be quite dramatic. (There’s a TIMs counter there though so you can’t walk too far)

It’s a great little overnight walk if you really want to get a feel for trekking. The only problem can be the weather during spring. On one Mardi Himal trek the views were obscured by clouds, on another they were amazingly clear.

All this from a lovely little stone tea house for 500 rupees a night.

Trekking with a group or alone?

I’ve always trekked with a guide. I like the company and I usually trek in the off season during winter. This year was different. It was March and quite warm. There would be no sub-zero temperatures. But there would be spring flowers blooming and impressive valleys.

I chose to trek with a group to cut costs and I also figured the company of others would be good. The problem started from day 1. The Polish couple were actually lovely. But disaster struck after we reached Dhampus. One of them hadn’t recovered from food poisoning a few days earlier.

My guide let them rest an extra night while I simply enjoyed the views and a book for the early rest day. Things didn’t get better though so my guide decided it was safer for them to return. A small car met us nearby along with another guide for me so my guide could return and look after the others.

On the second trek we went with Russians who were not so nice at all. They walked too quickly and had no cultural interest in the area.

Without a doubt I much prefer trekking alone with just a guide. The Mardi Himal trek is well marked and many people will say it can be done without a guide. But I don’t believe this is safe. The area around Forest camp is not well marked and neither is the route to Mardi Himal Base Camp. Later on in this trek we were also met with a ferocious hail storm and the trail became obscured.

Weather conditions can change within an hour in the mountains and having an experienced guide can help in keeping you safe.

For every trek I’ve accomplished in Nepal I’ve been very glad to have the reassurance of a trusted guide with me. It’s as simple as that. Plus the benefit of adjusting an extra day or two here or there versus being out voted in a group as was the case with the Russians.

So over the next few posts I’ll cover each of the trek days on a daily basis leaving out the trekking with a group or alone opinions. You’ll get a better idea of what the actual trek was like that way versus me moaning about my fight with the Russians (okay, maybe a little bit will be included at the end!)

Given the various routes for the Mardi Himal trek I really recommend a night at Dhampus if the weather is good. It’s also just a lovely place to go and spend a night or two if you are looking for that cabin in the mountains feeling!