Planning a trip to Bardia is easier than it seems

Bardia National Park is in Nepal’s far south west region. I’d heard the rumors for years of Bardia being like Chitwan was before the tourists arrived 20+ years ago. It was the “real jungle” of Nepal where tigers, elephants and one-horned rhinos roamed freely.

There were no tourist restaurants. No elephant rides. No electricity. No comfort. And, according to my many Nepalese friends, no tigers.

I’ve since been to Bardia over the past few years on many occasions. Without a doubt I prefer it to Chitwan in terms of wildlife and a real jungle experience.

I wanted to write up my experiences in the “real jungle” to dispel some rumors. Confirm some others. And, show you my experiences in getting there so you can plan your trip with up to date information (here is my full how to get to Bardia guide and my Bardia National Park Guide).

When to visit Bardia?

Bardia is open year round to tourists. There’s one cravat though. If you want to see Royal Bengal Tigers you have to go when they are thirsty.  This

means a trip during the tail end of winter in Nepal and before the monsoon season. It’s only during these months that tigers will come out of the deep jungle to the water holes to drink.

Of course there are no guarantees. So if you are in Nepal over this period it makes sense to call a reputable friend or resort and ask them if there were any tiger sightings during the week.

For me, I pestered at least two Nepalese friends on a weekly basis for over a month. One in Bardia and one from a travel agency in Kathmandu.

“How many tigers did you see last week?”

Then the following week I asked, “How many this week Bhai? (the nepalese for younger brother)”

“One yesterday Dhai,” came the reply. “And three more during the week!”

Of course getting to Bardia is what puts many people off. It’s not such an easy journey in terms of comfort. You could get a plane to Nepalgunj and then take a bus or jeep to Barida if you have the budget. Or hire your own jeep all the way there. But most people visit via the more economical bus route.

I’ve visited Bardia from both Pokhara and Kathmandu. On my first trip I took a bus from Pokhara. It was an experience in itself. Both journey’s are about the same time. 12 -16 hours (currently there is a lot of road widening taking place so delays are expected.)

The first thing to do is realise that it’s a local bus. Not a “tourist” bus nor “deluxe” bus in the strict sense. So in other words the seats will be really small. Not so small to kneecap you, but enough to make you realise you are not “Nepalese sized”.

The second thing to do is to try to book your bus seat in advance. This way you should be able to reserve a seat up front. Rather than the bumpy back seats. Certainly nothing past seat 16 is comfortable.

In Kathmandu buses depart from the New bus park, Kalenki and Gongabu Bus Park. The good news is that there are direct buses to Thakurdwara (basically the village near the park) from the new bus park. But, they can be cancelled so don’t expect everything to go smoothly. It is all a part of the adventure of visiting Nepal.

All other buses including the Pokhara buses will drop you at Ambassa – from there your pre-booked resort will be waiting to pick you up.

Buses usually leave Kathmandu and Pokhara between 2pm-4pm. and arrive between 4am-7am. Though there are also night buses leaving randomly from 11pm-1am. But the latter are not so reliable in terms of leaving at an exact time.

Arriving at 4am in Ambassa makes it pretty important to have someone meet you there as you can imagine. Luckily the resorts in Bardia are fairly reliable. But, for reassurance it’s a good idea to have a Nepalese sim card to stay in touch with them along the way. That said, reception is not the best in Bardia.

Don’t worry though. There’s usually some random guides and jeeps waiting in Ambassa at that time. So you shouldn’t get stranded. Though you’ll probably have to stay in their resort or pay 1000+ rupees for a jeep to Thakurdwara. 500 ish for a motorbike (40 mins).

The bus journey to Bardia

I booked my bus the day before. In Pokhara I just went to the old bus park ticket office and booked in person. It’s a 40 minute walk from Lakeside. In Kathmandu I asked an agent to book the bus due to the expense of taxis in Kathmandu and the hassle. Again, full details in my Bardia Guidebook.

The bus is fine for a local / tourist / deluxe bus. Up front with a window seat I hunkered down with my daypack filled with hot breads bakery goodies, a battery power bank and some headphones.

The bus took off promptly and like all Nepalese buses stopped continuously for the first two hours picking up people. I texted my resort in Bardia to let them know my bus company name, seat number and to let them know I was on the way.

The bus trundled on with tea breaks. Toilet breaks. And random breaks where the driver runs off for 10 minutes and no one can find him. All normal in Nepal.

I ate my apple danishes for dinner when we stopped at 8pm. There was nothing too inspiring to eat at the local road stop place and I also wanted to maintain good “stomach composure” for the entire journey. The good news was that my seat partner changed from middle sized man to very slim man. So, I had more room to begin the evening process of dozing off before being shaken awake by Nepalese road conditions. All the while being lulled by loud Bollywood music blaring out until 11pm when someone decided to shout at the driver to shut up.

By 12.30am we pulled into another restaurant. Toilet break time. I just followed the scurrying men down a slippery and smelly set of steps to the little iron doors hiding the squat toilets. Then it was back up to eat at the small selection of night cafes. The dal baht place everyone was eating looked fine but again I figured I had another 6 hours to maintain stomach composure so I went with a chow chow (egg noodles) man at the side of the road for 60 rupees.

Back into the bus and we were off again. By 3am Google maps was no longer working and reception was gone as well. It was pitch black outside. The bus rumbled on as we encountered several police checkpoints. Poaching is a big business hence the police are looking for smugglers and the like. Barida’s one let down is that poaching there is not being handled as well compared to Chitwan. We were stopped at least 5 times and at least one man got an ear bashing for something.

By 4am I confirmed with the sleepy conductor boy that I wanted to get off a Ambassa for about the 10th time. About 5 minutes later and I was sound asleep.

I stirred as we pulled over at the side of the road next to a collection of army checkpoints. A young man with long braided hair charged onto the bus and locked eyes with me.

And that was it. With only a day pack I jumped into Jack’s jeep and we were off on the bumpy road from Ambassa to Thakurdwara and the jungles of Bardia as the sun began to rise.

The real jungle adventure was about to start.

In the next post I’ll write about my jungle experience in Bardia. For now, this is some basic information on getting to Bardia which should give you some practical and relevant help. Here’s my online guide on traveling to Bardia and online guide to Bardia National Park. For full details with up to date maps, accommodation and planning please see my guidebook below.

Get my Bardia Guidebook (2016 edition) to learn more about Nepal’s best jungle destination!

The most up-to-date, popular and dedicated guidebook to Bardia National Park in the world. Take a look below and you’ll find out why! 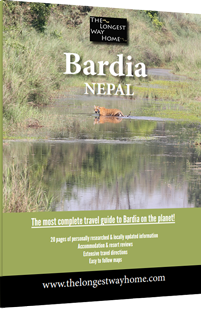